CyberiansTech
Home Tech Apple and Meta team up to track your Quest 2 workouts in... 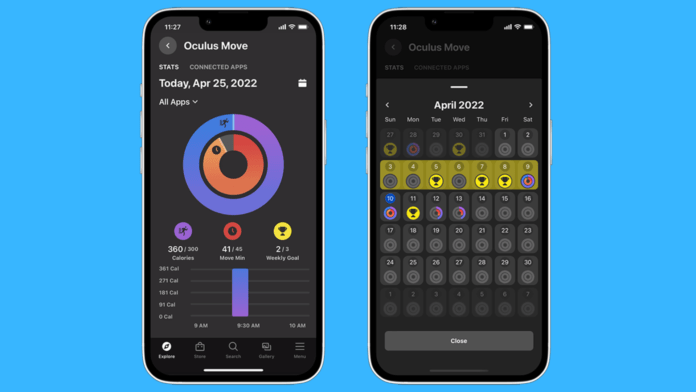 Meta’s Oculus mobile app is about to become a much better fitness companion. Once you’ve downloaded the latest updates you’ll find all of your Move goals and data are not only stored in your Meta Quest 2 headset but in your smartphone app as well.

Move is a great free fitness app for Meta’s Quest 2 headsets that tracks your activity in VR. Once switched on it runs in the background while you play any Quest 2 game (be it one of the best VR fitness games on the platform or any other VR title) and tracks your progress towards your goals.

The only problem with it is that your stats are locked into your headset, but that’s about to change. With the latest Oculus mobile app update, you’ll no longer have to enter VR to see how you’re progressing towards your targets – all the data will be there on your smartphone.

While this Oculus mobile app update is available on Android smartphones and iOS devices, those of you using an iPhone or iPad will get a little added benefit.

You’ll be able to sync your Move data with the Apple Health app so that all of your data can be tracked in one single hub.

Combine this with the new Health features coming to iOS 16 and watchOS 9 that were announced at the WWDC 2022 keynote – such as medication tracking and better health monitoring – and it looks like your Apple Watch and iPhone could combine with your Quest 2 to be quite the impressive fitness tech setup.

If you haven’t already, you’ll first need to turn on the Move app. To do this on your Quest 2 just open up your app and games menu and look for Move amongst your other titles. Open it up and follow the setup process to turn it on.

Now, to sync it up with your Oculus mobile app you’ll need to open up Move again and tap on Settings in the bottom right corner of the screen.

Scroll down and you should then see “Connect Move to Oculus Mobile App.” Toggle this on just like you can see in the GIF below.

Now your Move stats (like your calories burned and your VR fitness goals) will be encrypted and stored on Meta’s servers so you can track your fitness progress from the Oculus mobile app. Assuming you have the Oculus mobile app downloaded from the App Store or Google Play Store you should be able to track all your data from within this smartphone app.

Once you’ve followed these steps, iOS users can then link Move up with Apple Health.

Simply tap on the Move data in your Oculus mobile app and at the top of the screen you should see “Connected Apps.”

Tap on this to go to a new menu and then tap on the toggle next to “Apple Health” to enable sync between the apps. You’ll need to provide a few permissions to make it work fully, but once enabled all of your health data in and out of VR will be stored in one place.

Now that you have the Oculus mobile app installed, you might also want to check out our guide on how to cast your Oculus Quest 2 to a TV using it.