Apple’s AR glasses have been a source of speculation for years now, with patents dating back to 2015 and 2017 detailing AR-related software and hardware. But it wasn’t until earlier this year that it felt like Apple’s highly-anticipated AR eyewear project would really happen.

That was when industry analyst Ming-Chi Kuo said manufacturing of the AR specs would get underway at the end of this year or the start of the next one, according to money.udn.com. He also said that they will be reliant on a connected iPhone to do a lot of the heavy lifting in terms of processing and connectivity.

However, just as we were all getting excited about the prospect of AR-enabled iGlasses, news broke that Apple has instead scrapped its plan for AR glasses altogether. A report from Digitimes stated that supply chain sources have confirmed Apple has disbanded its AR team.

Although this news hasn’t been officially confirmed, again neither had the existence of an AR glasses development team in the first place! That means we have a case of Schrödinger’s Apple AR glasses – they don’t exist, but they don’t not exist.

While you try and get your head around that, let’s take a brief look at Apple’s augmented reality background and why AR specs seemed like the next big move for the tech giant.

UPDATE: Both Samsung and Huawei have filed patents related to creating AR specs in recent months. Although this won’t necessarily lead to AR glasses being developed, let alone reaching the market, it’s clear the biggest names in tech are busy looking into the potential of AR eyewear – even if Apple might be out of the ring.

What is it? A new Apple wearable, a pair of glasses making use of augmented reality tech.

When is it out? There’s never been a fixed date confirmed and now rumors suggest we may never see AR specs from Apple. So the answer is: not anytime soon.

What is augmented reality?

You’re familiar with the concept of virtual reality, right? Popping on a headset and having software transport you to an interactive, 360-degree, left, right, up, down, all-encompassing virtual world?

Augmented reality works a bit like that but with one big difference. Rather than giving a window into an invented world, it uses either screens or transparent lenses to place digital items on top of the real world around you.

The most popular example of this in action would be the lenses and filters available on Instagram and Snapchat – the ones that make it look like you have a squashed face, a dog’s tongue or hearts coming out of your eyeballs.

Another great example of well-executed and mainstream AR is Pokemon Go which puts Pikachu and co into your world through a combination of your phone’s camera and screen.

Both see your real world ‘augmented’ by software on your smart device. Essentially, AR lets you get context sensitive digital information overlaid onto your real world surroundings – look at a subway station and get train times automatically displayed, for instance, or walk down the aisles of a food store and have the specs recommend a recipe. The applications could be exciting and used for games and entertainment or just extremely boring and extremely practical.

Augmented reality could also get a significant boost thanks to the advent of 5G. In fact, many believe 5G could prove instrumental to augmented reality finally hitting the mainstream – at least for those in the UK.

What is Apple ARKit?

First launched back in 2017, ARKit was Apple’s way of sticking its flag down into the augmented reality landscape, an attempt to claim the space as its own. 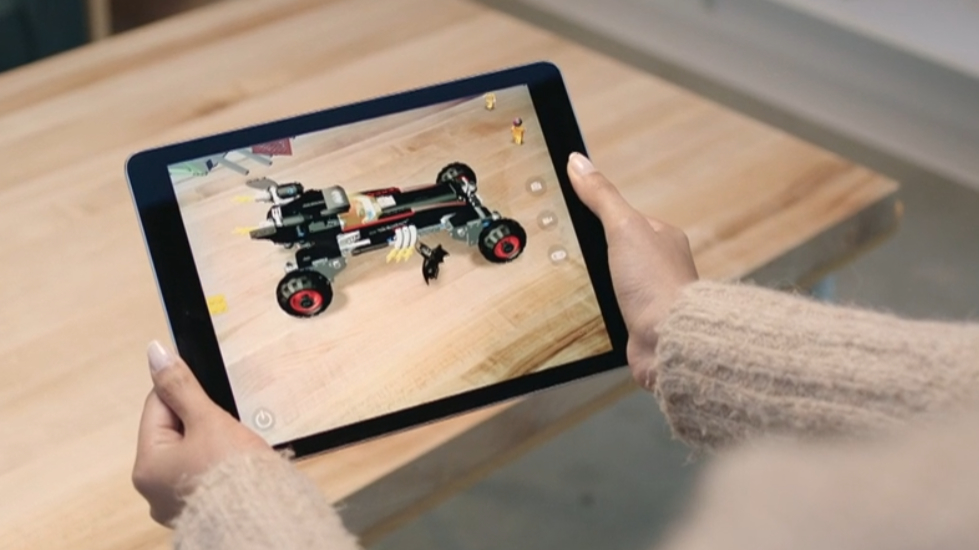 First revealed at WWDC 2017, ARKit is a new set of APIs to let developers build augmented reality applications for Apple devices. They can now create apps that use the cameras, processors and sensors in your iPhone or iPad and use this information to overlay virtual objects onto the real world.

It’s now in its second version, with a third on the way soon when iOS 13 lands in September 2019.

Users don’t necessarily know that an app has been created with ARKit – there’s no label – but they’ll see a fun, AR experience. For example, the IKEA app allows you to hold up your iPhone and ‘preview’ how furniture will look.

Why would Apple make AR glasses?

Apple ARKit is already bringing augmented reality to the forefront of consumer technology – but it’s just a platform. It’s long been suggested that the real future of Apple’s augmented reality road map would be AR glasses.

After all, Apple’s in need of a new product category. The last time the tech giant launched an inarguably successful new product line was the iPad – and even that has proved difficult to maintain momentum in.

AR is an exciting new area, and one in which Apple (at least in hardware terms) wouldn’t have much competition in, at least in the present with a mainstream and consumer focus.

Tim Cook has sung the praises of AR tech, going so far as to say augmented reality use will become as common as “eating three meals a day”.

“A significant portion of the population of developed countries, and eventually all countries, will have AR experiences every day,” he said during the 2016 Utah Tech tour, before casting shade on VR.

“I can’t imagine everyone in here getting in an enclosed VR experience while you’re sitting in here with me,” said Cook to those assembled for the Utah talk.

“AR is going to take a while, because there are some really hard technology challenges there,” he added.

Apple AR glasses hardware: the evidence, the patents and the specs

Apple has been busy picking up companies with an interest in AR, which suggests it’s prepping a product of its own – and recently Cook said that Apple had several new products in the pipeline that could “blow you away”.

We’ve also seen a bunch of Apple patents appear recently, explaining how specially-designed lenses could be used to cast images on a user’s eye, and how a touchscreen surface (like an iPhone or an iPad) could be used as a controller.

Apple also filed a patent for a catadioptric optical system – a series of lenses designed to project images into a user’s eyes – in early February this year,

In fact, Apple has been granted 53 patents, covering its AR wearable, 3D mapping technology, and a more intelligent iPhone Home screen, amongst others, as discovered by Patently Apple.

Perhaps most telling of all is a leaked injury report out of Apple’s Cupertino headquarters, which suggests Apple is working on a “prototype unit” which has resulted in eye injuries for two users. Eugh.

Apple has also made a number of key AR talent hires over the years. According to a report from Bloomberg, Apple has poached a leading employee of Nasa for the project, hiring Jeff Norris, founder of the Mission Operations Innovation Office of Nasa’s Jet Propulsion Lab. He is said to be working as part of an augmented reality team being headed up by another poached talent, Dolby Labs executive Mike Rockwell.

Right now, there are a number of augmented reality glasses already on the market from companies like Vuzix, Epson and Vue. But many of them are reserved for enterprise use (in big businesses), are being used by developers or have been built for a rather niche purpose.

There are also mixed reality headsets, like the Microsoft Hololens 2, which sits somewhere between VR and AR. As well as one of the most exciting AR headsets, the Magic Leap One.

The main difference between these devices and the promise of AR glasses made so infamous by Google Glass, is AR glasses were tipped to be smaller, slimmer and could easily be mistaken for regular glasses. The Magic Leap One is an extraordinary piece of kit, but not exactly what Apple would have in store with AR specs.

There could also be mounting competition from other big tech giants. For example, in July, details were leaked about a patent, which suggests Samsung might be working on its own pair of AR specs.

Spotted by Patently Apple, the filing shows a fairly standard design for a pair of glasses with added smarts on board. They’re going to be foldable, apparently, so you can pop them in your pocket when you’re not being wowed by AR.

What’s more, according to a patent filed by Huawei at the World Intellectual Property Organization (and spotted by LetsGoDigital), the company is experimenting with a pair of AR glasses that are lightweight but only work when you insert your smartwatch into them.

It’s also not a surprise to hear that Facebook, which owns Oculus, has also been rumored to be working on its own AR eyewear.

According to a 2017 patent, Facebook’s AR glasses could use a ‘waveguide display’ to combine computer graphics with the real world – essentially an advanced method of giving the illusion of depth on specs right in front of your face.

Based on the patent images, the AR glasses could look just like a regular pair of glasses, which means there will be a lot of complex, miniaturized technology to get right before they can be released.

This means Apple may not be releasing its own AR glasses anytime soon, but its competitors might be just a year or two away.

Of course we can’t talk about AR specs without mentioning the legacy of Google Glass. These advanced smart glasses were tipped to change everything, from tech to the way we live, by overlaying layers of information onto the real world. But thanks to public perception, financial problems and design challenges they never fully materialised – apart from for a small number of developers and testers.

Well, at least not how they were meant to. Google Glass is still around, but exists as the Glass Enterprise Edition aimed at business use.

Although the troubled story of Google Glass may sound like a bit of a failure (at least when it comes to consumer traction), it actually taught tech companies a great deal about building AR, tech-enabled eyewear and the challenges of bringing a whole new product category to market.

What will Apple AR glasses cost?

That’s a tough question, as there’s no real precedent for this sort of thing yet.
On one hand, you’ve got the Snap Spectacles, which were recently revamped as the Snap Spectacles 3 and now cost $380 / £330 (about AU$590). But as fancy as these new models are, they’re basic, have simple AR features and we imagine Apple will have a more feature-rich experience in mind.

On the other, you have the HoloLens 2. It’s not, strictly speaking, really a consumer device yet and is only up for pre-order. But it looks like it’ll cost around $3,000 (£2,719, AU$4,369), like the original Hololens, and will include additional software at an extra cost. However, Apple’s glasses will likely be built to mass-market scale, and with consumers (and associated price tags) in mind.