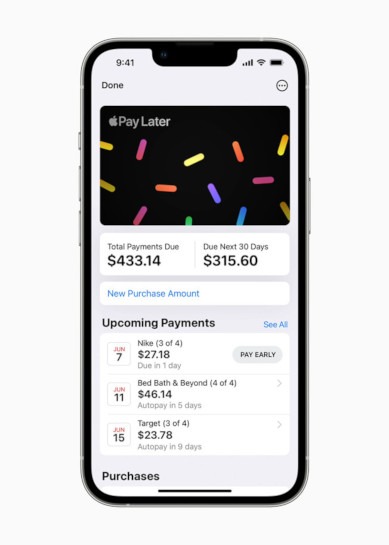 Apple has revealed plans to make it easier to use your iPhone as a payment tool with the launch of several new services at WWDC 2022.

The new additions include the long-awaited Apple Pay Later, arriving as part of iOS 16, which lets shoppers split the cost of a purchase made with their device into four equal payments over six weeks, without incurring interest or late fees.

The company has also made it easier to pay in stores using your Apple smartphone with the announcement that its Tap to Pay on iPhone service will launch later this month.

“Apple Pay Later provides users in the US with a seamless and secure way to split the cost of an Apple Pay purchase,” the company’s official press release noted.

Built into Apple Wallet, and available both online and within apps, Apple Pay Later will be available as a payment option alongside paying in full whenever a user checks out with Apple Pay or Wallet.

The service is built on Mastercard’s network, and gives users a clear view of exactly what payment amounts are expected, and on which date. Users have the option to pay early to clear a balance if wanted, with Apple saying the tool is “designed with users’ financial health in mind”.

The buy now pay later (BNPL) market has exploded in popularity in recent years as shoppers look for a more flexible way to spread payments, and Apple wants a slice of the market dominated by the likes of Klarna and Block (previously known as Square).

Reports of Apple Pay Later first emerged in July 2021, with rumors of a partnership with Goldman Sachs, which had been the company’s partner for its Apple Card credit card since 2019.

Tap to Pay on iPhone

The rollout of Tap to Pay on the iPhone is also a significant show of support for small businesses everywhere, allowing thousands of them to accept payment via iPhone. Initially only available in the US, Tap to Pay on iPhone uses NFC to securely complete and process transactions, and will work on the iPhone XS and newer models.

Apple launched Tap to Pay in February 2022 as a way for more businesses to accept Apple Pay and other types of contactless payments, and recently announced a partnership with Square to build the service into the latter’s POS terminals.