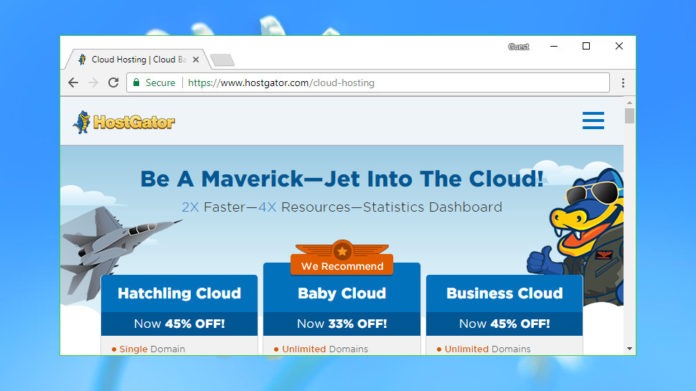 Signing up for a simple website hosting package will usually buy you a defined block of resources on a single server: this much web space, that much bandwidth, maybe a set amount of RAM or CPU cores.

While this works well for many websites, having fixed resources can be a problem for larger projects. There’s generally no way to temporarily allocate extra RAM or bandwidth if you experience an increase in traffic, and even a simple plan upgrade might require your website to go offline for a while.

Cloud hosting plans look much like virtual private server (VPS) products, where you’ll initially pay for a set amount of web space, RAM, CPU time and bandwidth. But these resources are spread across multiple devices instead of just one, and changing your plan later – adding another gig of RAM, for instance – is generally as easy as dragging a slider, with the extra power coming online within moments.

This flexibility is great for delivering extra power when you need it most, and starting prices can be similar to regular VPS hosting (from £10 or $14 a month). Costs will rise as you add resources, but typically you’ll only pay for the time in which you use these resources.

Cloud hosting still won’t be for everyone, and small, simple websites are likely to be better off with regular packages. But the technology has a lot to offer anyone with larger or more ambitious projects, and many hosts run free trials which make it easy to explore their abilities for yourself. 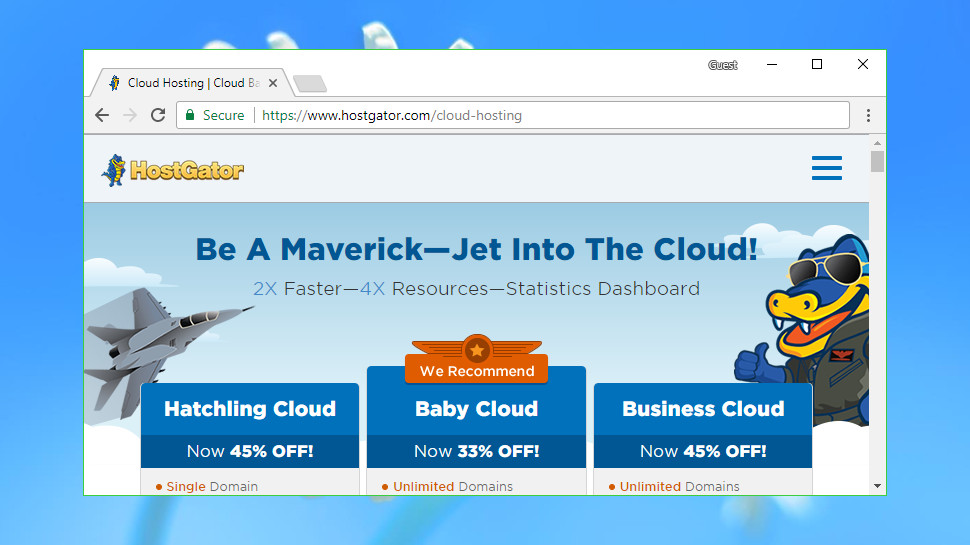 Cloud hosting isn’t just for big business. HostGator’s cloud platform spreads your website load across multiple virtual server instances for more reliable and scalable hosting, but it’s as easy to use as standard shared hosting, and only costs a little more.

For example, the baseline Hatchling Cloud plan gets you support for one domain, unmetered bandwidth and storage, a share of up to two cores and 2GB RAM, and distributed Varnish caching to speed up the loading of static content. You can get started for as little as $4.95 (£3.50) a month if you buy three years upfront, although the price leaps to $8.95 (£6.40) on renewal.

If you need something more powerful, the top-of-the-range Business Cloud plan supports unlimited domains, gives you up to six cores and 6GB RAM, and includes private SSL and a dedicated IP. Another chunky introductory discount means you can pay as little as $9.95 (£7.10) a month over three years, but after that you’ll pay $17.95 (£12.80) per month.

Benefits of the cloud plans include (up to) twice as fast load times, along with more site statistics, and because your site is mirrored across multiple devices, the ability to switch your site to another server in the event of a hardware failure.

But the key advantage of all cloud hosting schemes is scalability. If your site can’t cope with demand, you can scale up to eight cores and 8GB RAM with a click. There’s no waiting around for someone to process your order and no downtime while your web space is reallocated – you get the extra resources right away. 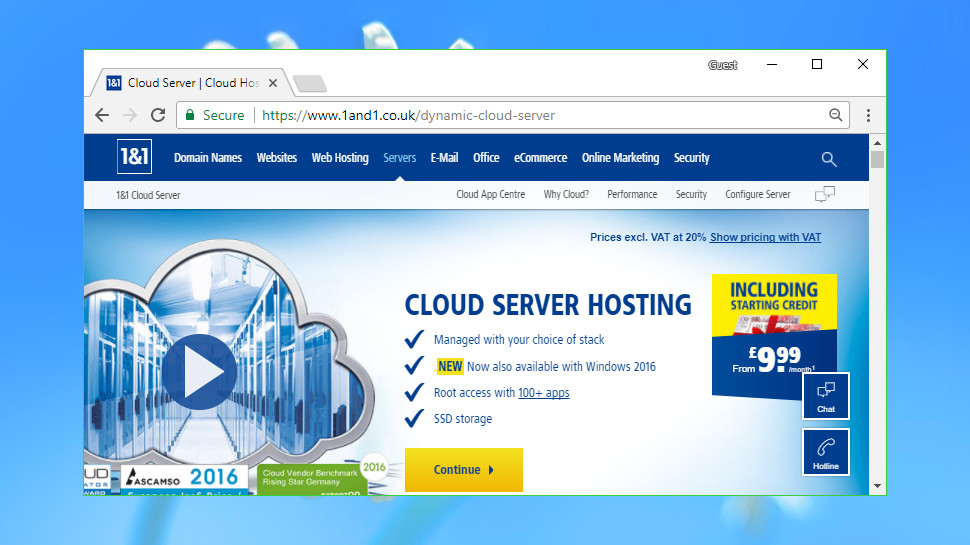 1&1 IONOS Cloud Server Hosting is a powerful range of products which combine dedicated server resources with the performance, flexibility and scalability of the best cloud hosting technologies.

All plans have decent specifications, giving you unlimited traffic and email accounts, a bundled SSL certificate, DDoS protection, $100 (£100 for UK)  starting credit for the first month and a choice of US and European data centers.

The highlight of the range is probably 1&1’s Cloud Hosting Flex package. Not only does this allow for adjusting cores, RAM and storage on demand, and adding up to 99 servers to the same contract, but billing is by the minute and you’re only charged for what you use.

Prices start at  $20.84 (£15.84 for UK) a month including the management fee. There’s no long-term contract and the first 30 days is free, giving you the chance to try before you buy.

At first glance, cloud hosting products seem to be divided into two clear groups: user-friendly but basic products from hosts like 1&1, and enterprise-level technology from Amazon, Microsoft, IBM and more, which is so complex that even experts might struggle to set it up.

Cloudways represents an interesting middle path. The company offers managed cloud hosting which is powered by your choice of the top providers – Amazon, Google, DigitalOcean, Kyup, Linode or Vultr are supported – and comes packed with features, yet is configured from a simple web console which is just as easy to use as the more basic competition.

Despite all this high-end functionality, Cloudways products are generally simple to operate, and prices start at a beginner-friendly $10 (£7.15) a month for one core, 1GB RAM, 25GB storage and 1TB of bandwidth. It’s all supremely configurable, and a free trial allows you to check out the product, with no credit card details required. Furthermore, a referral system is available, where both you and your friends can receive free hosting credits.

Founded in 2002, Bytemark is a UK-based cloud hosting company which has designed its own public platform using open source software.

This in-house experience brings some unusual advantages. Bytemark has developed its own hosting environment to set up a server, email and more. It covers everything from installing and managing PHP, MySQL, Perl and Ruby on Rails to helping you configure your firewall, spam rules and backups.

Experienced users can manage their account with a command line client, or even automate common tasks by integrating with Bytemark’s API.

As ever with cloud hosting, there’s plenty of flexibility. You can configure your servers with anything from 1 to 180GB RAM, 1 to 16 CPU cores, and 1 to 8 individual disks with either fast SSD or cheaper archive storage.

While cloud hosting schemes always involve pooling resources from multiple devices, most do their best to keep you away from the low-level details. You may be able to scale your plan by adding CPU cores, RAM or storage, for instance, but the console will present this to you as a single system.

DigitalOcean’s Droplets are based around similar resizable and customizable virtual machines, but that’s just the start – the technology has much more to offer.

For starters, the system supports Droplets of different types. If the standard plans aren’t enough – priced from $5 (£3.55) a month for one core, 1GB RAM and 25GB storage – Optimized Droplets aim to ramp up your performance by using the best Broadwell and Skylake CPUs, and providing more RAM and storage space.

Individual Droplets have more features than you might expect, including performance monitoring and alerts, snapshots and automatic system-level backups.

There are various interesting ways to work with your Droplets as a group, including setting up a cloud firewall, and using a load balancer to distribute incoming traffic across your infrastructure.

DigitalOcean’s transparent pricing is a highlight. You’re billed hourly, with monthly caps, ensuring you only pay for the resources you use. Many of the features come for free – monitoring, cloud firewall – while others follow very simple pricing rules. Snapshots cost $0.05 per gigabyte per month, for instance, while backups are priced at 20% of the cost of the virtual machine – easy.

If all you want to do is host a scalable WordPress site, this will probably be overkill, but developers, sysadmins and other more demanding users will appreciate the power and flexibility DigitalOcean offers. Browse the lengthy list of tutorials (which numbers 2,100+ at the time of writing) on the DigitalOcean site to find out more.