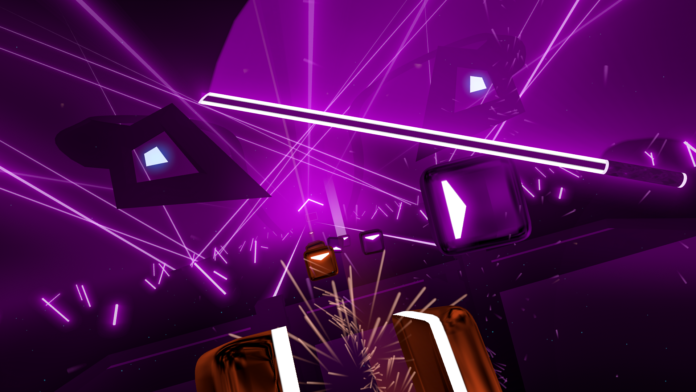 Meta’s Quest 2 VR headset is a great way for people to play games that can be physically demanding – so it’s no wonder that people are using the device to try and get fit.

The Quest 2 store is filled with sports games and fitness-focused experiences, all of which are vying for your attention. But how do you know which will become a part of your daily workout routine, and which will only be played once and then discarded –  like that Ring Fit Adventure kit you’ve forgotten all about for the Nintendo Switch?

To find an answer to your question we’ve tried a wide range of Quest 2’s library of fitness games. Thanks to our testing, we’ve determined which games are best for those of you looking to keep and get active using VR. Here they are.

Its addictive gameplay sees you slice red and blue blocks in time to popular music tracks, using dual laser swords; it’s like an aggressive version of Guitar Hero. You’re also forced to dodge around and under floating barriers that head your way.

As you ratchet up the difficulty, the note blocks will fly at you thick and fast. You’re sure to feel the burn throughout your whole body, but thanks to the great music selection Beat Saber offers, it’s easy to keep pushing yourself further and further so you can achieve your goals.

Traditional sports aren’t for everyone, so why would that be different in VR? If you’re looking for a fun fitness game to play using your Quest 2, you might want to try Dance Central over anything else on this list.

Dance Central takes you and your friends to your own private club where you can choose exactly which songs you dance along to. Thanks to its decently sized and diverse tracklist – with the option to purchase more songs for your library – you’re sure to find something you’ll love getting down to that’ll make you forget all about the exercise you’re getting in.

That said unless you really go for it with your dance moves, you might not find yourself working up too much of a sweat. After a while (especially on the harder difficulty level) you can start to feel the fatigue settle in –  but this is definitely one of the more casual Quest 2 fitness games on this list.

Ever wanted to feel like Hawkeye or Katniss Everdeen? Holopoint arms you with a simple bow and arrow as you try to clear through waves of targets that fire back at you as you destroy them – or if you don’t break them fast enough.

This mixture of upper body and lower body movement is sure to get your heart racing – an effect that is compounded by the need to aim and fire with speed to beat increasingly difficult levels.

Targets can appear anywhere so you’ll have to stay on your toes if you want to clear all 30 waves in its challenge mode and get the highest score possible.

What starts off as a fairly gentle warm-up quickly morphs into an intense Quest 2 workout that is sure to test your mental and physical skills.

We know what you’re thinking, how can a game all about shooting be good for your fitness? Well, from our tests, we actually found that Pistol Whip gave us a more intense workout than Beat Saber.

For one, you have to maintain a near-constant stance that keeps your arms up and ready to fire on enemies that come your way. You’ll need to move your arms swiftly to aim at foes or drop and re-raise them in a flash to reload mid-combat.

In areas filled with baddies, you’ll also find yourself having to move your whole body as swiftly as you can to dodge oncoming fire and keep your avatar alive.

The game’s on-rails motion can take some time to get used to – keeping this an experience best suited to those who don’t suffer extreme motion sickness – but if you can stomach it, Pistol Whip offers one of the best VR workouts out there.

Move over Nintendo Switch Sports, this family-friendly sports game for the Quest 2 is the best way to enjoy virtual sports from the comfort of your own home.

Sports Scramble allows players to enjoy games of bowling, tennis, and baseball in VR, but in has a few surprises in store. The game’s Scramble mode will see the balls, bats, and even courts morph at random mid-match.

One minute you’ll be playing regular tennis, the next you’ll be whacking a basketball over the net with a fish. While you can choose to play more traditional versions of the sports, opting to play with random elements gives Sports Scramble a lovably childish nature that we can’t get enough of.

You’ll just need to make sure you give yourself a suitably large play area since. As your equipment changes, so too will your positioning, and  it’s easy to walk into obstacles if you don’t give yourself enough room. Around 2m (6.5ft) in each direction should be enough.

If you aren’t a fan of heights, you might want to steer clear of this next sports game. Featuring stunning and dynamic environments, The Climb 2 is one of the best fitness games for the Quest 2; but even though the landscapes are virtual, it feels no less intimidating to see the drop below you.

While not as physically demanding as the real thing, The Climb 2 will still test your physical and mental resolve as you attempt to scale its challenging, obstacle-filled climbs. The mechanics are incredibly engaging, and while they can take a little getting used to (those that suffer from motion sickness may be left feeling woozy at first) the experience is worth it.

Word of warning though, you’ll want to make sure your VR space has a high ceiling that you can’t touch even when you jump. There are some sections where you’ll have to reach up and leap to grab the next handhold. On more than one occasion we’ve ended up bashing our Quest 2 controllers as we instinctively reach up as high as we can.

Sports don’t always have to be about achieving peak physical fitness, they can also help to facilitate engaging social interactions. That’s no less true of Walkabout Mini Golf.

Its online multiplayer mode works smoothly, and its excellently crafted courses serve as the perfect VR destination to head to if you want to meet up with friends and family online. Plus, thanks to its incredibly realistic controls you’re sure to hone your real-life mini-golfing skills by playing a few rounds in here.

You may not work up as much of a sweat as in some of these other entries, but if you’re looking for a relaxing way to get active using your Quest 2 – and want to do so with a friend – this is the sports game for you.