Most web hosting packages run on Linux servers, and it’s easy to see why: the operating system is fast, reliable, secure and free, with an impressive software ecosystem that includes some of the best web applications around.

For all these benefits, Linux won’t be the right setup for everyone. If your site is based on Microsoft technologies like ASP.NET or .NET, or you’re intending to run Exchange, Microsoft SQL Server or some other Microsoft stack product, you’ll need to choose a Windows plan.

There’s no cPanel, but something similar (like Plesk) will make it easy to view your website status, create email accounts, tweak settings and generally manage your plan.

Select a VPS or dedicated hosting plan and you’ll also be able to use Remote Desktop to manage the server from its own desktop.

Windows hosting has some issues. You won’t get the same choice of applications as with Linux. There’s less help available for troubleshooting apps like WordPress on the Windows platform. There are Microsoft licence fees to pay, too, so it’s a little more expensive than Linux plans.

Overall, though, if you need to take advantage of Microsoft technologies, Windows hosting can deliver a great service for a surprisingly low price. Read on for five top Windows hosting providers you might want to check out first. 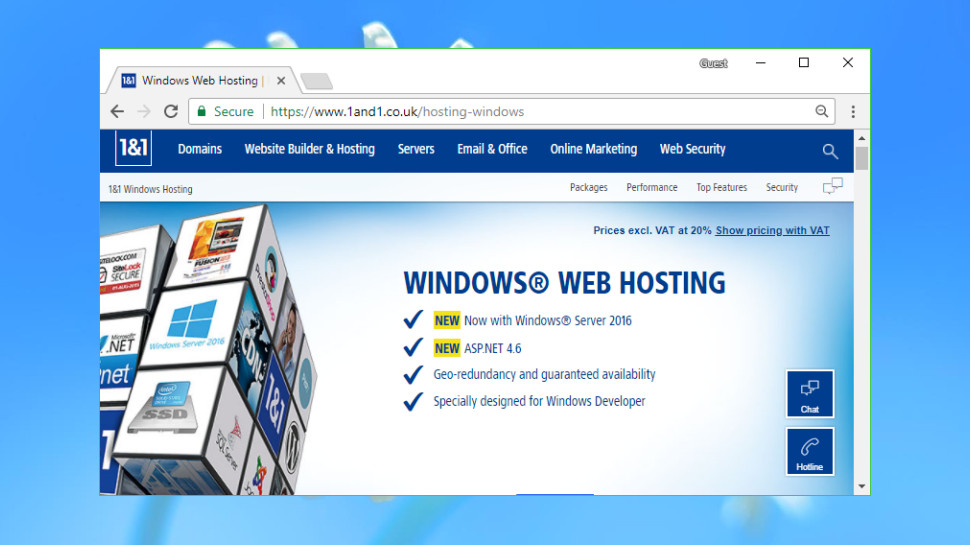 Windows hosting has a reputation for being costly, but 1&1 IONOS’s shared Windows range shows it doesn’t have to be that way.

Prices start at $1 (£1 for UK page) a month for the first year, $7.99 (£5 for UK page) afterwards, yet even the most basic plan is better specified than some of the Linux competition. You get 1 website, 100GB web space and unlimited bandwidth, along with 25 email accounts with 2GB storage per account, plus daily backups, 24/7 phone and email support, a free domain and an SSL certificate threw in.

Windows-specific features include five Microsoft SQL databases of up to 1GB each, ASP.NET 4.7, ASP.NET Ajax and MVC 3, 4 and 5. There’s support for SQL import, SSI and dedicated app pools, and your plan will be running on Windows Server 2019 (many hosts are still using 2012).

Ramping up to the top-of-the-range Pro Windows plan gets 100 databases (1GB SSD), 100 email accounts, a dedicated IP, regular malware scanning and an integrated Cloudflare-based CDN. Again, this is good value at only $1 (£1 for UK page) a month for the first six months, $10 (£7 for UK page) afterwards.

These are shared plans and don’t give you full control over the server, but more flexible VPS and dedicated plans are also available at very low prices, and opting for Windows instead of Linux will cost from an extra $14 (£10) a month.

Factor in the one-month trial and 1&1 IONOS could be a sensible choice for novices looking to try out Windows hosting with the minimum of risk. 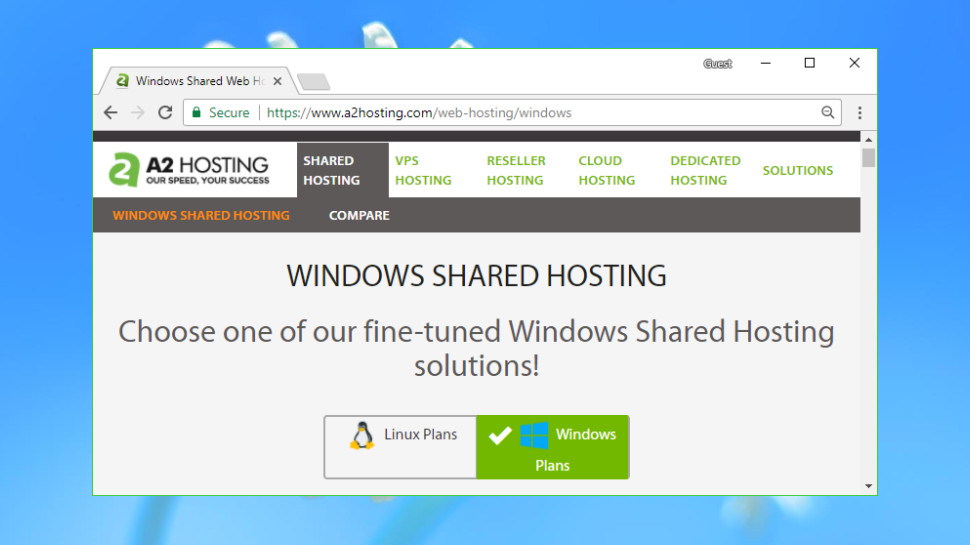 A2 Hosting is a capable provider with a huge range of plans covering everything from basic shared products, managed WordPress and email hosting, to reseller plans, cloud VPS and dedicated servers.

What you do get with the Swift plan is support for an array of current and legacy Microsoft products and standards: ASP.NET 2.x, 3.x and 4.x, classic ASP, .NET Core 2.2, ASP.NET MVC 4 or 5, IIS 8.5 and Silverlight 4 or 5. And if your needs are more cross-platform, there’s PHP 5.6, 7.0, 7.1 or 7.2 support, phpMyAdmin, and one-click installers for PrestaShop, WordPress, Drupal and more.

If shared hosting isn’t enough, A2 also provides managed Windows VPS plans. These are well specified and priced fairly from $32.99 (£25.99) a month initially, $49.99 (£39.39) on renewal, which represents decent value for the features and support you get.

While there are plenty of low-cost shared Windows hosting packages around, they’re not the best choice for everyone. We suspect that many users who need a Windows website will also require more speed and functionality than the average customer, and budget hosting may not be good enough.

Hostwinds‘ Windows VPS hosting offers no less than 10 plan configurations, making it much easier to find and purchase the precise level of service you need.

The baseline specification is impressive. Every plan offers free site migrations, SSD storage, and 1Gbps network connectivity (100Mbps is common with other plans). You also get the ability to use Windows Server 2008, 2012 or 2016, along with fast response times for any support issues (30 seconds for chat or phone, 5 minutes for tickets), and 99.999% uptime guaranteed overall.

The starter Tier 1 plan offers relatively limited resources, with one CPU core, 1GB RAM, 30GB disk space and 1TB traffic per month. But it’s also a good value at $9.89 (£7.6) a month for the first term, $10.99 (£8.4) on renewal. Those prices are for a monthly billing cycle, too – no lengthy contract required.

Optional extras are reasonably priced. You could add cloud backups for $1 (£0.70) a month, for instance, while spending $5 (£3.60) on basic server monitoring will see Hostwinds watch your system and automatically raise a support ticket if it goes down.

Put it all together and these seem well-designed hosting plans which are powerful, configurable, with excellent support and a generous 60-day money-back guarantee. If basic Windows hosting isn’t enough, Hostwinds could be worth a try. 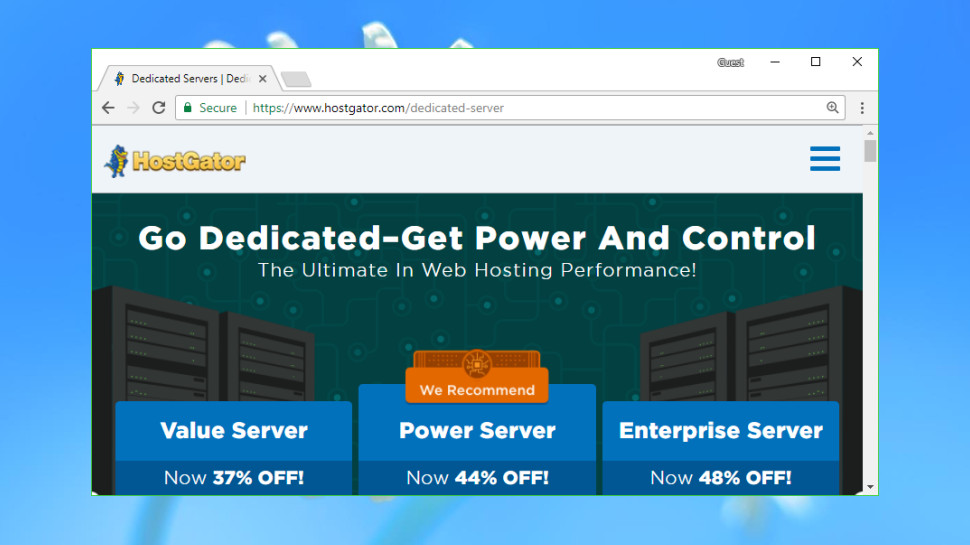 Many web hosts provide some level of Windows support, but it’s often limited to a specific set of products, such as dedicated servers. That could become an issue if you decide you’d like to upgrade or downgrade your hosting at a later date, so it makes sense to look for hosts which offer more flexibility.

HostGator has a range of Windows plans covering personal and business-friendly shared hosting, and ranging up to highly-specified dedicated servers with the power to run just about anything.

Most of these products are distinctly short on limits and restrictions. The starter Personal plan may only support one website, but you’re allowed unlimited subdomains, emails, MySQL and Microsoft SQL Server databases, and unmetered bandwidth and disk space. It’s priced from $2.64 (£2) a month if you sign up for the three-year plan, $6.95 (£5.3) on renewal, which is cheaper than the equivalent Linux plans of some providers.

HostGator’s dedicated plans are a little more up-to-date, though still lagging behind some of the competition, with Windows Server 2012 R2, IIS 8.5, SQL Server 2014 Express, and ASP.NET from 2.0 up to 4.6.

Headline prices are reasonable, with the Value Server plans starting from $119 (£85) a month, and occasional special deals as low as $79.99 (£57) for legacy servers. Be sure to carefully check the small print, though – you might have to sign up for three years to get these prices, and large introductory discounts mean that you could pay more than double on renewal.

The company’s Cloud VPS range hosts your webspace across multiple devices to improve performance and scalability, delivering what Liquid Web claims is the “fastest managed VPS Hosting on the planet”. All plans include features that might be chargeable extras elsewhere – unlimited sites, Gigabit transfer, Cloudflare CDN, DDoS attack protection, US or EU hosting – and run Windows Server 2012 or 2016, yet you can still get a capable setup for $59 (£48) a month.

Unusual touches include a choice of SQL Server versions. 2014 or 2016 Express come by default and you can add the Web Editions for $35 (£25) a month, but Standard and Enterprise editions are also available if you need them.

For even more control, you could opt for one of Liquid Web’s Private Cloud Servers, although these are primarily made for organizations considering the price. These give you all the power of a Cloud Dedicated Server but also allow for creating, managing and using custom VPS instances (separate virtual servers). You could set up a Windows VPS to run your ASP.NET site, for instance, but also create a Linux VPS instance to run WordPress, another for PrestaShop, maybe a third as a Windows development environment – it’s up to you.

Private Cloud Servers prices start from $1599 (£1261) a month with no long-term contract requirements, and no leap in costs after an initial discount expires.

Liquid Web may charge a Windows license fee on top of that, but you’ll only pay once per Cloud Server. This allows you to create as many Windows-based VPS instances as you need, at no extra cost.

Interestingly, if you remove all Windows instances then the license fee will no longer be charged, a handy money-saver for users who only need Windows support occasionally.

Whatever product you choose can be fully managed by Liquid Web’s excellent support team, another company highlight. The firm doesn’t just promise to keep your site up and running, there’s a commitment with a 100% uptime SLA (service level agreement), a strong sign of confidence in its services that you rarely see elsewhere.