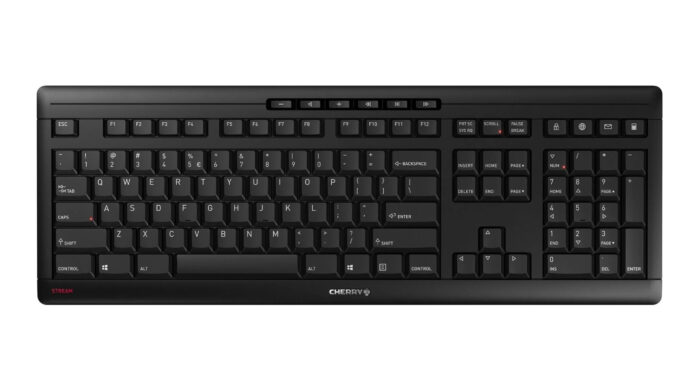 Best wireless keyboards for productivity and gaming in 2021

Only, they bring in new advantages to the table like impressive range and long battery life. Some of the gaming ones are even brilliant enough to offer customizable RGB lighting without it being much of a drain on battery life.

Live untethered (to your desk) and cable-free whether you’re all about gaming or attached to your job. The best wireless keyboards below are, in many ways, loads better than their wired counterparts.

Choosing the best peripherals isn’t just about finding the best-looking one. The Cherry Stream Desktop is proof of this, and while it might look like it time-traveled from the Aughts or the late 90s, this wireless keyboard is the most compelling choice out there overall.

Extremely affordable, comfortable to use, and easy to set up, this keyboard from Cherry is a pleasure to type on because of its incredibly responsive performance and satisfying tactile feedback. It’s a bit sparse on special features, but it also makes up for that with the wireless mouse it comes bundled with. Both utilize one USB wireless receiver, which means you’re not only saving money, you’re also hitting two birds with one single port.

Built like a tank
Best for gaming
Not the cheapest

By premium, we don’t just mean its price. Where do we even begin? The Razer BlackWidow V3 Pro comes with all the premium trimmings, from its build and impressive switches down to its multiple connectivity options, low latency connection, and deliciously plush wrist rest.

In other words, there’s much to love here to justify that admittedly higher price tag. Breaking its wireless feature and performance down, however, there are three modes of connection here: Razer HyperSpeed wireless, Bluetooth, and USB-C cable (if you’re in the mood to be old school). That’s not all; it also lets you pair up to three devices via Bluetooth, which means it can connect to up to five devices at the same time – a major boon to multitaskers. What’s even more impressive is that both Bluetooth and USB wireless connectivities are equally reliable in range and responsiveness. You can have your computer in one room and be typing in another, and you won’t notice the difference between these and a wired connection.

Under $50
Travel-friendly
Not rechargeable

We’ve been using the Logitech K380 as our go-to work keyboard for months now, and we can honestly say that it’s one of the best keyboards out there for writers, digital nomads, and folks who spend most of their time pounding away. But, even if you’re not always typing on your computer, the fact that it’s very cheaply priced for what it offers also makes it a fantastic choice for you.

Adding to its value, it also comes with features like multi-device connectivity (specifically, up to three) and multi-platform compatibility. You can even toggle from one device to another with just a press of a button for the ultimate productivity if you’re multitasking. That’s without mentioning its super sleek and portable form factor, which makes it not just travel-ready, but also travel-friendly. We only wish Logitech made it rechargeable, but with 24-month battery life, this missing piece is hardly a deal-breaker.

Logitech G’s G915 TKL Lightspeed keyboard is one of the best-looking keyboards we’ve ever used, touting a sleek and incredibly slim deck and even thinner floating keys. That’s without mentioning its cool volume wheel and unique round keys for connectivity and media controls.

It doesn’t just go by looks alone, however. Its performance and feature set are just as impressive, rocking an actuation distance of 1.5 mm, long wireless range, and low latency. Rounding those off is its onboard memory that lets you save two lighting and three macro profiles, a battery life rating of 40 hours when its RGB is at 100% brightness, and its Game Mode button that disables the Windows key. And, while it’s compact, it doesn’t completely abandon its special and arrow keys. In other words, what you’ve got here is a wireless keyboard that’s just as great for productivity as it is for gaming, whether you’re on the go or at your desk.

Despite its size, this new release from Razer more than punches above its weight, touting an incredibly robust build, vibrant RGB lighting, and satisfying tactile feedback. Go with Razer’s yellow switches, and you’ll also get a quieter typing experience without sacrificing your comfort. But, what’s truly impressive about this wireless keyboard is its connectivity. Offering both USB wireless and Bluetooth connections, it not only boasts an impressively long wireless range, but also zero discernable latency (much like its full-sized brother, the BlackWidow V3 Pro). That’s even when you’re in one room with the keyboard and the computer it’s connected to is in another. That’s already impressive in its own right, but given the competition, that’s really saying something.

Amazing tactile feedback
Thin and portable
Not for Windows

Who are we kidding? The best wireless keyboard for Apple’s Macs and MacBooks is the actual wireless keyboard Apple specifically designed for them. Now touting the company’s scissor switches, the Magic Keyboard is aptly named, as the experience of typing on it may be bordering a magical experience.

It’s true there’s not really a lot of features here. Very much an Apple product, this one focuses more on form and function, and not as much on features. There’s still much to love, however. It pairs incredibly easily with an Apple computer, and it’s among the thinnest and most compact keyboards we’ve ever had the pleasure of using. And, if you plan on investing in the new iMac 24-inch, you can even get it in the same shade (of which there are six on top of the usual silver). Unfortunately, you can only get these colors if you purchase the matching AIO, but here’s to hoping Apple will make them available for individual purchase.