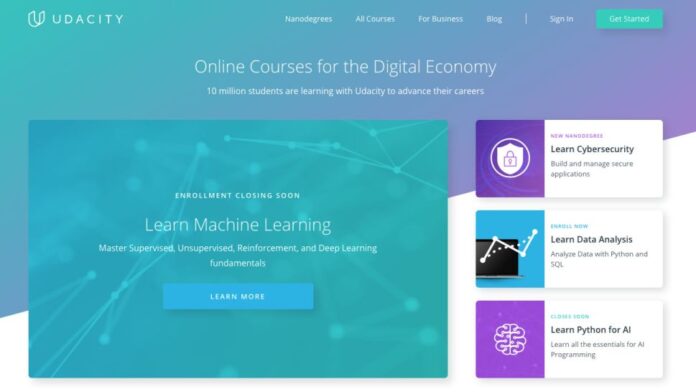 Python, JavaScript, Java, or C++ with a Nanodegree from Udacity

Whether you’ve been programming for a decade or have just entered the field, the most reliable way to advance your career is by learning new, marketable skills, but few working adults have the time to go back to a traditional college campus to master those skills. Udacity’s Nanodegree programs offer a fast and effective way to pick up a new programming language with hands-on, real-world learning guided by industry experts.

While Udacity’s Nanodegree programs are already offered for far less than courses at traditional universities, for a limited time, you can get the tech skills you need for 75% off. Use the code: TECHRADAR75

For the last decade, Udacity has made education accessible around the world. What began as an online learning experiment by Stanford professors Sebastian Thrun and Peter Norvig has grown into the go-to source for driven professionals and aspiring learners to advance their careers with new, marketable skills. Udacity’s Nanodegree programs are designed in partnership with industry leaders to prioritize the in-demand skills necessary to build and advance your career.

Udacity’s Nanodegree programs are 100% online and self-paced, designed to be completed with as little as ten hours a week. In a couple of months, you can pick up a new programming language, like Python, Javascript, Java, or C++ without ever stepping foot in a classroom. Udacity won’t waste your time with outdated textbooks and classes that are obsolete before you even graduate. Every course offered by Udacity is part of a constantly evolving curriculum designed in partnership with top-tier industry leaders with the singular goal of helping you master the skills you need.

The most popular of coding languages, it’s virtually impossible to be a software developer without using some JavaScript. JavaScript is essential to front-end web development with nearly all major sites, including Twitter, Facebook, and YouTube all relying on this versatile language. As a forgiving and flexible coding language, JavaScript works across all major browsers. While you may know the basics of JavaScript, there is almost certainly more to learn.

Udacity’s Intermediate JavaScript Programming Nanodegree program can help you do just that with as little as ten hours a week over the course of three months. This program will prepare you for a wide range of roles in web development, server-side application development, and desktop development.

Spread out over three courses, you will learn how to use object-oriented programming to build applications with reusable and maintainable blocks of code, gain a high-level understanding of functional programming, and get comfortable with reading, writing, and thinking in asynchronous patterns. You will apply your lessons to projects based in the real world, including building a Mars Rover dashboard using a real NASA API and building a single-player racing game.

According to Github, Python was the second most popular programming language in 2020, coming in just behind Javascript. This general-purpose coding language has applications in web development, data science, machine learning, and more. Python is incredibly versatile and favored by some of the biggest companies in the world, including Google.

With Udacity’s Intermediate Python Nanodegree program, you can master Python in just two months with just ten hours a week. You’ll work hands-on to free analyze data and build the backend of web applications. You will learn how to write, structure, and extend your code to support large systems at scale.

Each lesson will incorporate hands-on projects where you’ll get personalized feedback from Udacity’s network of more than 900 project reviewers, and mentors will be available around the clock to answer any questions you have along the way. Spread out over two courses, your projects will include creating a program that can inspect and query close approaches of asteroids, and building a meme generator that can import multiple types of data, resize images, and overlay data on said images.

Another essential coding language for any programmer to have, Java came in third most popular according to Github. Despite being over two decades old, Java has continued to evolve to the ever-changing digital landscape. Java is designed to look and feel like C and C++, but with as few implementation dependencies as possible. Put simply, Java allows you to write software on one platform and run it on virtually any other platform, making for extremely portable, high-performance applications.

With Udacity’s Java Programming Nanodegree program, you will elevate your Java skills to design, code, test, and deploy cutting-edge Java software. Spread out over just three months with as little as ten hours a week, students with little to no prior Java experience can position themselves for success as professional Java developers.

This program is divided up into three courses, each with its own hands-on project based on real-world scenarios. In your first course, you will design and implement an application for making hotel reservations using basic Java programming. The second course will move into advanced Java techniques in which you will apply concurrent programming to enhance a legacy web crawler, as well as build a method profiling tool to measure its efficiency. The third course will cover Java application deployment with a project focused on UdaSecurity, an existing GUI application for managing a home security system.

The high-performance coding language, C++ is used in some of the world’s most exciting engineering jobs. Whether you want to work in robotics, media platforms, or even video games, odds are you will need to have a strong background in C++. Although C++ is an older coding language, it remains one of the most popular programming languages and has been expanded significantly over the years to incorporate object-oriented, generic, and functional features.

Over four months with as little as ten hours a week, Udacity’s C++ Developer Nanodegree program will give you hands-on experience in five exciting projects. You will build a route planner using OpenStreetMap data, write a Linux system monitor with similar functionality to the widely used htop application, optimize a ChatBot project with memory management in mind, and build a multithreaded traffic simulator using a real urban map and state-of-the-art concurrency concepts.

Your final course in this program will be a capstone project in which you get to build your very own C++ application. Utilizing the skills you’ve gained from the previous courses, you will choose an application, design the architecture, and build a prototype. As with all of Udacity’s Nanodegree programs, you will have access to mentors 24/7 and its extensive network of project reviewers.

Marketable, focused education for even less

When enrolling in a Nanodegree program with Udacity, you can not only trust that every step of your curriculum has been guided by industry professionals but also trust that you will get results. Nearly 75% of Udacity graduates report favorable career outcomes and half report a pay increase of +33%*. Best of all, because Udacity’s programs focus only on the skills you want to learn, you won’t be paying for any extra credits.

While Udacity’s Nanodegree programs are already offered for far less than courses at traditional universities, for a limited time, you can get the tech skills you need for 75% off. Enroll in the Nanodegree program of your choice and increase your earning potential as you advance your career. Take advantage of this special flash sale by March 31st, 2021. Use the code: TECHRADAR75 and take the first step to a better future today.

*Based on a 2020 survey of Udacity graduates who signed up with the intention of advancing their career.