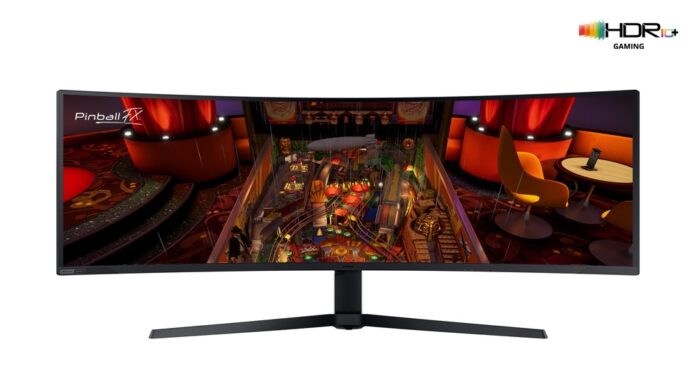 Samsung’s 2022 televisions and monitors will support its recently unveiled HDR10+ Gaming standard, the company announced. That means they’ll deliver a variety of features for gamers like variable refresh rates (VRR) at up to 120Hz and automatic HDR color correction on a game-by-game basis.

The standard will be used by Samsung’s 2022 Neo QLED lineup with the Q70 TV series and above, along with gaming monitors, the company said. It didn’t mention any models, but it showed a wide-screen gaming display (below) and what could be a 2022 Neo QLED TV with very slim bezels.

HDR10+ Gaming slipped under the radar when it was first announced, but it appears to be a move to counter Dolby Vision HDR for gaming found on Xbox Series X/S consoles. It provides a “consistent HDR gaming experience without the need for manual calibration across a variety of display technologies for various input sources, including consoles, PCs and more,” Samsung said.

The idea with HDR10+ Gaming is that you won’t need to use any manual settings, as the game engine itself automatically optimizes color calibration in real-time. It’s designed to deliver details in dark shadows and highlights, while configuring the display to a “true reference mode” so colors are displayed as intended by the developer. It also supports VRR at up to 120Hz along with tone mapping that won’t add any extra latency to the gaming signal.

As with HDR10+, however, the challenge for Samsung is getting developers to adopt the standard for games. Dolby Vision gaming is already available or is coming to over 100 games on Xbox Series X/S, so Samsung has some catching up to do. It did say that “several companies, including Saber Interactive, are expected to showcase their HDR10+ Gaming titles” at CES 2022 (if it takes place).

Samsung could make some headway with PC gaming, however, as Dolby Vision is only available on a handful of PC titles. To help pave the way for HDR10+ PC games, Samsung said that NVIDIA GeForce RTX 30 Series, RTX 20 Series and GTX 16 Series GPUs will support HDR10+ with drivers “scheduled for release in 2022.”