CyberiansTech
Home Projector Sony’s new 4K laser projector should tempt you away from a big... 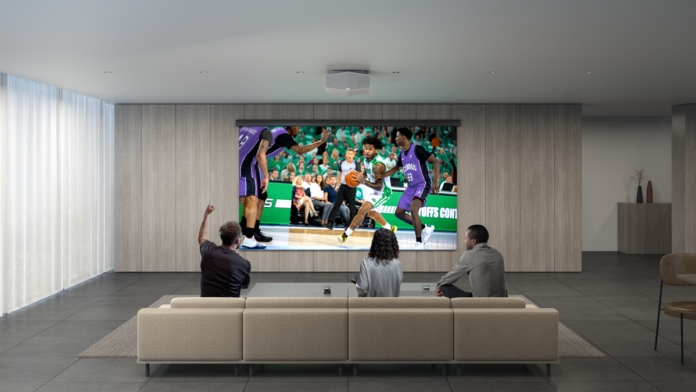 Sony has announced two new 4K laser projectors, one of which is as large and high-end as these things are generally expected to be, while the other is much smaller and more affordable than previous laser options, and makes 4K laser a real alternative to a huge-screen TV.

The Sony VPL-XW5000ES is the compact option that we’re especially interested in. Sony says it’s “30% smaller in size and 35% lighter in weight” than the Sony VPL-VW790ES model that these two projectors are effectively replacing, which means it’s going to be much easier to actually fit into a room, whether you want to ceiling-mount it or find a convenient shelf. Its exact dimensions are 18.1 x 7.9 x 18.6 inches / 460 x 200 x 472mm.

Sony also says it produces 2,000 lumens of brightness, but with a 30% reduction in energy use per lumen, so it’s more efficient (and so will hopefully run cooler and quieter) than previous laser options.

The Sony VPL-XW5000ES will cost $5,999 / £5,999 (AU pricing is tbc) when it releases in “summer 2022” – specifically July or August. That’s obviously still a very high price compared to what most people pay for a 4K TV, but it’s pretty much in line with the best 4K projectors, and – what really interests us – also makes it competitive with the best 85-inch TVs.

The likes of the Samsung QN95B cost more than this for an 85-inch model… and they’re obviously only 85 inches. This projector is made to go bigger – much bigger –for the same price.

For that extra cash you get a brighter 3,200-lumen output, a new 70mm lens that promises even sharper focus across the whole picture, and a ‘Live Colour Enhancer’ feature that’s designed to give more vivid colors where it can, while intelligently making sure that elements such as skin tone don’t become unrealistic.

Both models use the same “world’s-smallest” SXRD 0.61-inch panel for projection, with native 4K resolution. They also both include Sony’s X1 image processor, which has been a fixture in lots of highly-rated Sony TVs. Excellent motion processing and upscaling from HD are two of this processor’s hallmarks, but what’s maybe most exciting is its ‘HDR Remaster’ capabilities – it’s fantastic at taking SDR material and making it look HDR while keeping realism in the picture. For those with a library of HD Blu-rays, these could well be the best projectors available today.

And you can generally expect top-tier HDR performance from these projectors thanks to them being laser. Much like the best OLED TVs, laser projectors can go totally and genuinely black in areas that need it, meaning you get astounding contrast and range.

Finally, these models even promise to be great for gaming. At 4K 60Hz, Sony says you can expect around 20ms of lag, while in 2K 120Hz Sony says to expect 13ms, which is competitive with the best gaming TVs. The only downside is that you can’t do 4K 120Hz – but then gaming TVs don’t come in 120-inch sizes, so we’ll call it a draw.