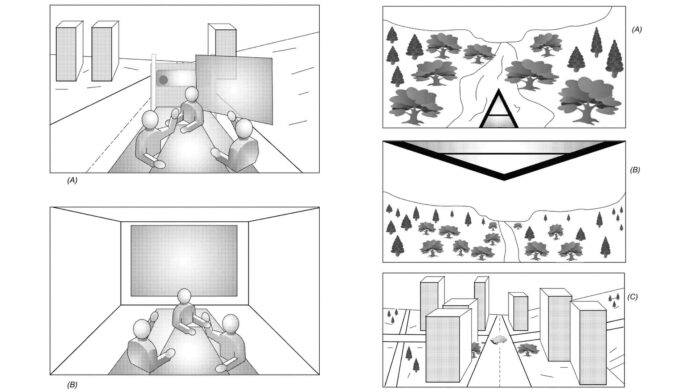 The Apple Car could be a VR entertainment system on wheels

A new Apple patent hints at how its VR headsets could one day spice up our travels in autonomous vehicles, while also helping to reduce motion sickness.

The released schematics reveal how a driverless car and a VR headset could work together to keep travelers entertained on their journeys (via PatentlyApple). VR headset wearers could be dropped into a game, or they could invite friends and celebrities to be their virtual travel companions.

On the more business-focused side, the patent also showed how users could attend a business meeting while on the move – on the back of a flatbed truck no less. Rather than being confined to a virtual meeting room, you’d be able to look out at passing scenery, so you’d be less likely to become disoriented and motion-sick.

Alternatively, the headset could mix up your method of transportation. For a more relaxing adventure, you could be treated to a boat ride down a river, while those after a more high-octane thrill could see zombies chase after their vehicle in a post-apocalyptic scenario.

And you wouldn’t just be treated to a visual spectacle. Apple has plans for you to be given a true 4D experience as the car’s HVAC system blows air in your face, the speakers play surround sound audio, and the seat jostles you using its own internal motors.

As with all patents, there’s no guarantee that we’ll ever see Apple bring these systems into an actual car, or the long-awaited Apple MR headset – but it certainly paints an interesting picture of what plans it could have for its long-awaited Apple Car.

It’s clear that Apple believes that we’ll one day do away with driver’s seats entirely, and it’s already thinking about what that means for travelers. Based on the patent, Apple seems keen to develop innovative new ways to keep passengers entertained and productive while on the move.

We’ll have to wait and see what Apple comes out with over the coming years (or more likely decades), but if it can convince passengers and lawmakers that removing a car’s steering wheel is a good idea, who knows what we could see it develop next.

Plus, with the patent’s mention of a flatbed truck implementing its VR systems, Apple could be envisioning a whole fleet of Apple tech-filled vehicles; autonomous Apple Plane, anyone?