The best graphics cards are a must for anyone doing anything beyond regular everyday computing. Whether it’s for gaming, video editing, or doing graphic design work, you need something to handle the graphical load. And, the integrated graphics inside lower-powered PCs and laptops just won’t do the trick.That’s where graphics cards come in. They’re designed to handle intensive graphical tasks so that your PC can keep up with your creative workload and gaming demands. That’s particularly true if you’re trying to get a faster refresh rate or higher resolution out of your setup.

Upgrade or build your PC with one of the best GPUs around. It’s the only way to truly get the most out of your computing experience, whether you want to play that AAA game that just came out, finish a video editing project, or mine Bitcoin.

How to choose the best graphic card for you?

After all, a high-end GPU like the Nvidia GeForce RTX 3080 may set you back quite a bit but, with that hefty price tag, the ability to keep up at 4K resolution. In general, AMD’s newest lineup of cards is going to run a little cheaper than Nvidia’s offerings.

But, when Nvidia released their newest GPUs, they dropped the price to be more competitive. So, the difference in price is not so stark, though it should still be a consideration. In fact, each company has a GPU that’s competitive for each level of gaming, whether it’s 1080p, 1440p, or 4K, at similar price points.

Where the performance between the companies differs is in ray tracing – new rendering technology that improves reflections, shadows, and more realistically mimics light. With AMD RDNA 2, the company is just getting started on implementing this new tech. Whereas Nvidia Ampere GPUs are not Nvidia’s first entry. In fact, the company has been at it longer so it’s better implemented.

And, while you won’t be able to swap the graphics card out on a gaming laptop, these same considerations apply. You might be able to get a cheaper one with an Nvidia GeForce RTX 3060 or splurge on one with an RTX 3080.

Is AMD no longer the king of great value GPUs? The Nvidia GeForce RTX 3060 Ti certainly threatens that claim with its price to performance ratio.

The newest arrival in the RTX 3000 line, this graphics card punches way above its weight class, delivering a performance that could rival that of the RTX 2080 Super while keeping its price tag incredibly affordable for most people. And, that’s with impressive ray tracing included. 1080p gaming has never been this good and this affordable.

However, with the next generation of Nvidia graphics cards, the price of 4K gaming has been cut nearly in half, thanks to the RTX 3080.

It continues what the RTX 3080 has started – to take 4K gaming into the mainstream arena – with its breathtaking 4K at 60fps performance while slashing a few hundred dollars off the steep 3090 prices. This is the best graphics card on the market right now, especially if you care about ray tracing.

You can’t beat the Nvidia GeForce RTX 3090 when it comes to performance. With a whopping 24GB of RAM, no game or, more importantly, heavy graphics project will suffer performance issues. In fact, you can even get some 8K performance at 60 fps out of the 3090.

It is an incredibly expensive unit, and quite large too, so it will probably be too much GPU for most users. The Nvidia GeForce RTX 3090 is, in essence, a replacement for the Titan so it’s meant more for the creative user tackling intensive 3D and video rendering than for the avid gamer. Even so, it comes with a massive reduction in price compared to the Titan, even if it’s still out of most people’s budget.

For rock-solid 1080p gaming, you can’t go wrong with the AMD Radeon RX 6600 XT. Not only is the card a great performer, but it doesn’t use a lot of power so you can install it in a system with a smaller PSU.

Because of its great thermal efficiency, you also don’t need a super-expensive water cooling system built into your PC. Unfortunately, it is a bit pricier than the Nvidia GeForce RTX 3060, its direct competition, and doesn’t come with ray tracing.

The RTX 3070, therefore, brings it to the mainstream for the first time, and that’s without you having to compromise on settings for most games. And did we mention the fact that this GPU is incredibly cheap? A cheap price tag plus 4K gaming on quality settings equals great value, and that’s why the RTX 3070 tops our list.

This Nvidia GeForce RTX 3060 Ti rival delivers a solid 1440p performance with ray tracing to boot. It comes at the right time as well, with 1440p gaming monitors’ growing popularity. Its price is a bit closer to the more powerful RTX 3070, but if you’re an AMD fan, it’s still an excellent contender.

This GPU delivers a solid 4K gaming performance and impressive ray tracing at 1440p while being a better value than its direct rival, the RTX 3070, thanks to its VRAM. Plus, AMD’s Smart Access Memory technology will make it even faster.

If you’re after the Nvidia GeForce RTX 3090, you’re going to want one with a cooler that’s more than powerful enough to handle the full brunt of the power on offer. The MSI GeForce RTX 3090 Gaming X Trio has the cooling power not only to handle this GPU at its stock settings but has enough oomph to overclock it to make it even more powerful.

For a GPU that already laughs in the face of all PC games at 4K, this extra power is just icing on the cake.

When Nvidia first revealed its Turing lineup, it was hard to find a model that didn’t cost an arm and a leg. Nonetheless, with the launch of the Nvidia GeForce GTX, 1660 Ti – especially the PNY XLR8 Gaming OC model – next-generation performance became accessible to everyone.

You won’t have access to 4K 60 fps gaming with this card, but it’s one of the best graphics cards for anyone still using a 1080p display, and it can handle most esports games well above 60fps. At that resolution, you’ll have trouble running into any title that it can’t handle.

We also make sure to log how much power it’s consuming and the temperatures it reaches under load, to make sure we can recommend it to people that may be concerned about high temperatures in their PCs.

Finally, we take a look at the features that each graphics card offers, though usually, these don’t really change generation-to-generation. However, the performance while enabling something like ray tracing definitely can change.

Generally, if you like ray tracing, Nvidia will probably have the edge for you and in the past, AMD was better for people on a budget. 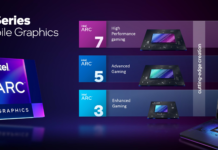