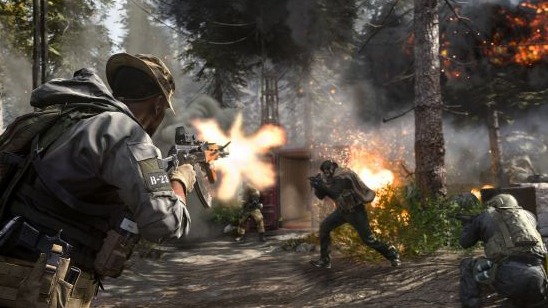 Publisher Activision Blizzard, responsible for the game this article refers to, is currently embroiled in ongoing litigation in regards to claims reporting a workplace culture that allegedly enabled acts of sexual harassment, abuse and discrimination. Read our Activision Blizzard lawsuit timeline of events for ongoing coverage of the events.

A new Call of Duty game is on the way, which shouldn’t be a huge surprise to anyone. With its reliable annual release schedule, Call of Duty has become a series with a pretty predictable place in the gaming calendar and that looks set to continue in 2022. 2023, on the other hand, could prove to be another matter.

Call of Duty 2022 is confirmed to be in development at Infinity Ward and we now know that it’s going to be a sequel to 2019’s Modern Warfare, effectively making it a reboot of 2009’s Modern Warfare 2.

But while news that a new Call of Duty is in development certainly isn’t a surprise, Microsoft’s planned acquisition of series publisher Activision Blizzard certainly has been, with the announcement raising questions over the Call of Duty series’ future on PlayStation.

Fortunately, Microsoft has stated in a recent blog post that it will “continue to make Call of Duty and other popular Activision Blizzard titles available on PlayStation through the term of any existing agreement with Activision. And we have committed to Sony that we will also make them available on PlayStation beyond the existing agreement and into the future so that Sony fans can continue to enjoy the games they love.”

Want to know more? Read on for everything we know about the new Call of Duty.

Currently, no release date or platforms have been confirmed for Call of Duty 2022 but, sometime in 2022 is at least a safe bet.

Typically Call of Duty games release in November but prominent Call of Duty leaker Tom Henderson claims he has heard “rumblings” that the new Call of Duty will instead release one month earlier, in October, with a reveal taking place “in the summer” and a “big” Warzone update coming soon after. Adding some credence to this, in a recent report on a potential delay to 2023’s Call of Duty release from Treyarch, Bloomberg referred to this year’s Call of Duty as “set to come out this fall”.

Henderson claims that Call of Duty 2022 is releasing earlier due to Call of Duty: Vanguard’s “poor sales performance”. While this, of course, remains a rumor, Henderson is a notable Call of Duty leaker, having previously accurately leaked information on the series. It’s possible, however, that even if this is the plan now, the game could see a delay further down the line.

While we can only speculate on the new Call of Duty’s release date, we can make more of an educated guess on what platforms the next entry in the series will release on. It’s almost certain that we’ll see Call of Duty 2022 land on PS5, Xbox Series X, Xbox Series S and PC, whether it will also land on PS4 and Xbox One is less certain, however (though we expect that it will).

The new Call of Duty’s release on PlayStation will come as a relief to many, following Microsoft’s acquisition of Activision – but it looks like the series will stay multi-platform for the foreseeable future (more on this below).

Will Microsoft’s acquisition of Activision Blizzard impact the new Call of Duty?

Following the announcement of Microsoft’s planned $69 billion acquisition of Activision Blizzard, there’s been uncertainty over what the takeover will mean for Call of Duty 2022 and for the series as a whole, with the main question being: will future Call of Duty games come to PlayStation?

In a blog post announcing the deal, Xbox head Phil Spencer said: “Activision Blizzard games are enjoyed on a variety of platforms and we plan to continue to support those communities moving forward”. But the ambiguous statement didn’t exactly confirm whether or not current Activision Blizzard franchises, like Call of Duty, will become Xbox exclusives at a later date.

Spencer then tweeted that he had “good calls” with leaders at Sony and had confirmed Microsoft’s “intent to honor all existing agreements upon acquisition of Activision Blizzard” as well as the company’s “desire to keep Call of Duty on PlayStation”. “Sony is an important part of our industry, and we value our relationship,” Spencer wrote.

Had good calls this week with leaders at Sony. I confirmed our intent to honor all existing agreements upon acquisition of Activision Blizzard and our desire to keep Call of Duty on PlayStation. Sony is an important part of our industry, and we value our relationship.January 20, 2022

However, this didn’t exactly instil confidence among Call of Duty PlayStation players, as many worried about what these “existing agreements” are. After all, Spencer didn’t explicitly say future Call of Duty games will be on PlayStation.

Thanks to a report by Bloomberg, however, we may at least know what the deal means for Call of Duty in the near future. Four anonymous insiders, who claim to have knowledge of the deal, told Bloomberg that the next three Call of Duty games are slated to release for PlayStation as well as Xbox consoles. The sources told Bloomberg that Activision had already committed to these releases before the acquisition and so Microsoft intends to honor it.

These three games are apparently the now-confirmed Modern Warfare 2 reboot (aka Call of Duty 2022), another Call of Duty game from Black Ops Cold War developer Treyarch (potentially delayed to 2024) and Call of Duty: Warzone 2 (the next iteration of the popular battle royale spinoff).

Further to that, a blog post published by Microsoft in February 2022 has offered more clarification and addressed Call of Duty specifically, saying that it will stay on PlayStation even beyond these existing agreements.

The post states, “to be clear, Microsoft will continue to make Call of Duty and other popular Activision Blizzard titles available on PlayStation through the term of any existing agreement with Activision. And we have committed to Sony that we will also make them available on PlayStation beyond the existing agreement and into the future so that Sony fans can continue to enjoy the games they love.”

That seems like good news for the future of Call of Duty on PlayStation. In fact, Microsoft goes even further in the post to say: “We are also interested in taking similar steps to support Nintendo’s successful platform. We believe this is the right thing for the industry, for gamers and for our business.”

Activision is reportedly planning to give the Call of Duty franchise a break in 2023, meaning Call of Duty 2022 might well be the last in the series until 2024.

The decision to break from the annual release cycle is because last year’s Call of Duty: Vanguard failed to meet Activision’s expectations, Bloomberg reports. While Vanguard was the best-selling game of 2021, its sales were still markedly lower than the previous year’s Black Ops Cold War.

If these reports are accurate, it will make 2023 the first year without a new Call of Duty in almost two decades. Apparently, Activision will fill the gap with continued support for Call of Duty 2022 and its free-to-play spinoff Warzone.

2022’s Call of Duty is allegedly also bringing a second free-to-play spinoff, titled DMZ, which will also help fill the gap between mainline releases. According to Tom Henderson, a freelance writer with a strong record of reporting on Call of Duty and Battlefield 2042 leaks, DMZ is inspired by games like Escape From Tarkov, which mixes multiplayer with AI enemies and a high-pressure loot game.

The DMZ is Call of Duty’s take of Escape From Tarkov/Hazard Zone.February 3, 2022

Activision hasn’t confirmed Bloomberg’s reporting. Instead, saying in a statement it has “an exciting slate of premium and free-to-play Call of Duty experiences for this year, next year and beyond.”

After confirming that Infinity Ward is the main development studio behind 2022’s Call of Duty, Activision Blizzard has now confirmed the rumors that the game will be a sequel to 2019’s Modern Warfare in a tweet from the official Call of Duty account with further elaboration in a blog post.

In the blog post, Activision confirms that the game will be developed by Infinity Ward at the same time as a new Warzone experience and they’ll be “designed together from the ground up” with a brand new engine powering both.

Let’s start with a look ahead:✅ COD 2022 is a sequel to MW 2019, and being designed with a new #Warzone experience (both led by @InfinityWard)✅ A massive evolution of BR, with an all-new playspace and new sandbox mode✅ A new engine powering both the new game and #WarzoneFebruary 11, 2022

Infinity Ward has confirmed that it’s the studio working on the 2022 Call of Duty release, tweeting in February 2022 to say: “A new generation of Call of Duty is coming soon. Stay frosty.”

A new generation of Call of Duty is coming soon.Stay frosty.February 3, 2022

Infinity Ward previously developed 2019’s Call of Duty: Modern Warfare, as well as the ongoing Call of Duty: Warzone. The studio hasn’t given any more solid details than that and in its recent financial reports, Activision has only revealed that the studio is “working on the most ambitious plan in franchise history, with industry-leading innovation and a broadly appealing franchise setting.” Now, of course, we know that the game will be a sequel to 2019’s Modern Warfare.

Another leak from Ralph, this time claiming that Call of Duty 2022 will have a mode similar to Rainbow Six Siege, where attackers will have to complete an objective within a time limit while defenders must stop them. Ralph claims that defenders can utilize “hidden locations, boobytraps and cameras” to slow down attackers, with destruction playing a major role in this mode.

Fellow leaker, Ralph, corroborated Henderson’s claims, claiming that the objective of the mode is to “accumulate loot within several separate maps, before successfully extracting”.

The mode currently in development by Infinity Ward for #ModernWarfareII is apparently more like Escape From Tarkov than Hazard Zone from what I’ve been told.It’s grittier and built from the ground up with this particular mode in mind. “It’s not an afterthought” – Current Dev.November 8, 2021

Brutal and gruesome?
Leaker Ralph has shared more allegedly details on Call of Duty 2022’s campaign mode – which will apparently be pretty brutal. Ralph claims that the new Call of Duty’s campaign will be “gritty and unrelenting”, with realistic gore and death animations that see characters gurgling and convulsing (among other things) before eventually dying.

In addition, Ralph claims the next entry in the series will include a new ‘Moral Compass’ system similar to Red Dead Redemption 2’s honor system, with certain decisions impacting the campaign.

Fighting Columbian drug cartels?
According to a report by VGC in 2021, the new Call of Duty’s campaign will see focus on “US special forces fighting a covert war against Columbian drug cartels”. VGC reports that the previously reported codename of ‘Project Cortez’ relates to the campaign premise, and is so called as it is the plotline to the 1994 film Clear and Present Danger, which has a villain called Colonel Félix Cortez.

The account doesn’t state where these rumors are from, however, so it’s entirely possible they are just speculation right now.

Bloomberg’s report corroborates Henderson’s claim from 2021 that the new Call of Duty will be a Modern Warfare 2 reboot, not to be confused with the Modern Warfare 2 campaign remastered that was released in 2020.

It looks like Call of Duty: 2022 is codenamed Project CortezIt’s expected to be a sequel to Modern Warfare 2019.September 13, 2021