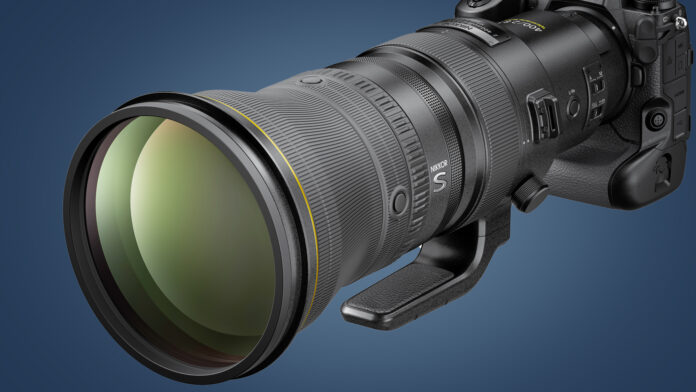 The camera phone wars may still be fierce, but an equally ferocious battle is brewing at the other end of the photographic spectrum – with the new Nikon Z 400mm f/2.8 TC VR S recently riding in on the back of the Nikon Z9 to battle Canon’s pro mirrorless cavalry.

While Canon’s RF 400mm f/2.8L IS USM is pretty much a direct copy of the camera giant’s equivalent DSLR lens, including the same optical formula, Nikon’s new super-telephoto prime has been designed from the bottom up for mirrorless cameras, which brings a few innovative features.

First, it has a built-in 1.4x teleconverter – this means that, rather than having to add your own and increase the size of your setup further, you can push its focal length up to 560mm (albeit with a narrower resulting aperture of f/4). It’s also compatible with the Nikon Z series’ 1.4x and 2x teleconverters, which means you can get even more reach for subjects on the distant horizon.

Elsewhere, there’s a ‘voice coil’ autofocus motor system, which Nikon has got slightly carried away with and dubbed Silky Swift Voice Coil Motor (VCM). This uses magnets rather than gears to move the lens elements, with the benefit apparently being silent operation – which is particularly handy for wildlife snapping. The slight downside of this system is that it’s so powerful that Nikon has advised against using it if you have “a pacemaker or another fitted heart medical device”.

Nikon says the Z 400mm f/2.8 TC VR S is also the first Z lens to use its new ‘Meso Amorphous Coat’, which apparently offers its best-ever anti-reflection performance. We’ll have to wait to test that ourselves, but the promised 5.5-stop vibration reduction (which you also get when shooting with the built-in teleconverter) certainly sounds like it’ll be a great combo with the Nikon Z9’s in-body stabilization.

At that $13,999 / £13,499 / AU$22,999 price, which the Nikon Z 400mm f/2.8 TC VR S will be available for in March, this certainly isn’t a lens for the average photographer. But it is an interesting example of what the camera giants can do with the latest mirrorless mounts, whose shorter flange distances (the distance between the lens mount and sensor) allow them to make innovative new lens designs.

Nikon’s Z-mount is, on paper, the most versatile full-frame lens mount around because it combines the largest diameter mount (55mm) with the shortest flange distance (16mm). This creates a large possible angle of incidence, making it theoretically easier to create very high-performing lenses.

That’s exactly what Nikon is doing now, with the Z 400mm f/2.8 TC VR S expected to be followed soon by 600mm and 800mm super-telephoto primes. While it isn’t possible to make definitive statements about a lens from official sample photos, the shots below using the combination of a Z 400mm f/2.8 TC VR S and Nikon Z (by photographers Roie Galitz and Matthias Hangst) really do show what’s possible with the latest mirrorless camera tech.

You can click on the link below each one to peek at the incredible sharpness, detail, and shallow depth-of-field that’s possible with the full-frame super-telephoto, with the resulting compression completely obliterating the background to bring your eye to the subject. We’re very much looking forward to testing the Z 400mm f/2.8 TC VR S with the Nikon Z9 soon, but for now here are some stunning sample shots.