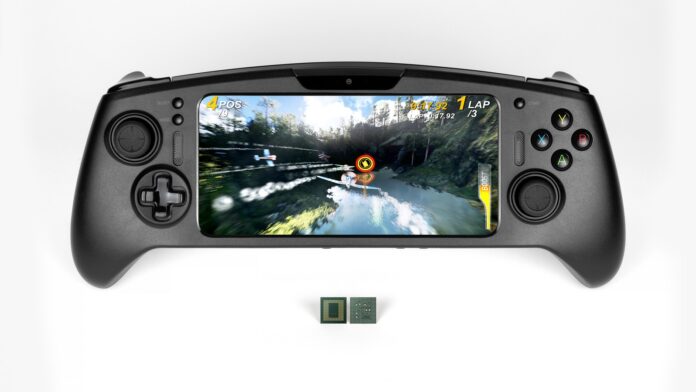 In the years since the Nintendo Switch reawakened the desire for a mobile gaming console, other devices have emerged to meet the demand of consumers. But the next one to come out – a joint project between Qualcomm and Razer – won’t even be sold to consumers.

Instead, the Snapdragon G3x Handheld Developer Kit, as it’s called, is a working console meant for developers to experiment with making mobile games beyond smartphones. It’s a pre-platform of sorts, meant to get developers (and potentially, game studios) used to a new class of console before they arrive on the market.

No, not pocket desktop consoles like the delayed Steam Deck – the Snapdragon G3X, as its title implies, runs the Snapdragon G3x Gen 1, the first of an entirely new line of Qualcomm chipsets dedicated to gaming (not coincidentally following the same naming convention as the just-announced Snapdragon 8 Gen 1).

In other words, the consoles Qualcomm is priming the gaming industry to cater to would be focused on mobile gaming. Presumably, these consoles would run the same apps you’d find in the Google Play Store or Apple App Store, but with souped-up specs and dedicated analog thumbsticks and buttons that would leave touch controls behind and displays unobstructed.

There have been plenty of false starts for mobile console gaming over the years, like the Nvidia Shield Portable system, and outside the Nintendo Switch, none have lasted long. This has partially been due to the ubiquity of smartphones, which have inadvertently lowered the bar: why spend a lot more money on something that plays the same games as the phone you already own? Why encumber yourself with another device that needs updating and charging?

To Qualcomm, this seems like a natural progression of mobile gaming, and the company has a vested interest in seeing a transition to dedicated consoles – namely, so its new Snapdragon G3x chipsets can power them.

That’s the reason the chipmaker seemed so blasé when asked during a background briefing if the Snapdragon G3x would come to market. If a manufacturer came along wanting to take their fully-realized concept and make consumer devices, Qualcomm may be interested in collaborating – but even if a different console debuted first, the chipmaker is happy to sell them the silicon they’ve already tested and implemented in a finished device.

So what is the Snapdragon G3x Handheld?

The Snapdragon G3x Handheld Developer Kit is, essentially, a supercharged smartphone gaming platform with a dedicated controller built around it.

This isn’t exactly a new concept given the all-in-one Steam Deck and Nvidia Shield Portable before it (among others) – it’s just applying those to mobile gaming. But unlike previous phone gaming setups that are either add-ons for specific models like the Kunai Gamepad for the Asus ROG 5 or wrap-around controllers like the Backbone and Razer Kishi, the Snapdragon G3x Handheld doesn’t serve as a phone at all.

There’s a good amount of phone DNA in the Snapdragon G3x Handheld, though: a 6.65-inch Full HD Plus OLED display with 10-bit HDR and a 120Hz refresh rate, 5MP 1080p webcam, and Android operating system all feel inherited from phones. Plus, it has mobile connectivity, allowing players to take the console on the go and play anywhere they could with a phone.

But there are some novel things that Qualcomm is bringing from mobile gaming to consoles, too. While we don’t have much information on the Snapdragon G3x Gen 1 chipset powering the G3x Handheld, the company claims the silicon will power advanced haptics and other extras – which should elevate the gaming experience on the console above how it feels to play on a phone.

Its Adreno GPU will also have updateable drivers – and while Qualcomm’s flagship chips have been able to download updates from the Play Store to their Adreno GPUs since last year’s flagship Snapdragon 865, per Android Authority, that required manufacturers to customize and publish the updates for their devices. A mobile gaming console manufacturer would conceivably get to these updates faster.

The hardware is more suited for gaming, too – which is likely all Razer’s influence, from the angled controller grips, buttons, and thumbsticks to the air-cooling system that intakes cool air from the console’s back and expels hot air out the top. (Ideally, this will keep the G3x Handheld from overheating and losing frames, which can happen with less powerful or poorly-cooled phones.)

Crucially, it also has a USB-C port at the top to output 4K HDR and up to 144Hz to a linked TV or monitor, allowing it to power play on a big screen a la the Nintendo Switch’s dock – but beating that console to the 4K punch. The port can also output to an ‘XR viewer’ (like augmented reality glasses), which Qualcomm believes will take off in the coming years.

The G3x Handheld also has 4-way speakers, a 1080p webcam for streaming, and mics at the center and top of the device. At least one version connects to sub-6 and mmWave 5G, too, allowing for the fastest possible mobile gaming, along with WiFi 6E.

This all makes the G3X sound like an impressive way to spruce up your mobile gaming for those who have extra cash to spare. What makes the console stand out above other peripherals is the software provided by AKSys Games Localization, which auto-maps on-screen controls to buttons and thumbsticks.

If you’ve played with phone gaming peripherals before, you know how audacious this claim is: no matter how slick your controller design, it’s worthless if you can’t get button presses to sync up with on-screen touch controls. If Qualcomm and Razer can pull this off, it could make the G3x Handheld and standalone mobile gaming consoles as a whole attractive enough to justify the expense and hassle.

The Snapdragon G3x Handheld certainly seems like an odd device to announce publicly, but only from a consumer perspective. Qualcomm wants game developers and potential console producers to believe that this product niche is not just possible, but inevitable. The company is betting an entirely new chipset line on it.

So who woulda mobile console be for? Qualcomm and Razer see modern gamers as nomadic, switching between platforms even to play the same games. The G3x Handheld serves gamers-on-the-go as it can play already-popular mobile games on the device, but also host games streamed from the cloud given its mobile connectivity.

As a developer-focused device, the G3x Handheld has the freedom to offer plenty of features that might be trimmed away in a consumer-facing console – the aforementioned XR glasses compatibility is a good example given its sparse adoption thus far.

But ultimately, the G3x Handheld is a harbinger, at least according to Qualcomm and Razer: mobile gaming made up 52% of the $175 billion made by the global gaming industry last year, and it’s only growing larger (by comparison, PC made up 21% and console 28%). Mobile gaming will continue to evolve, and the G3x Handheld is one way that device makers could introduce new ways to serve an ever-growing market.