CyberiansTech
Home Tech The Best VR Headsets 2019: Which Headset Offers The Most Immersion For...

Now that VR Headsets proven to be a mainstream form of entertainment – not just an overpriced tech fad for early adopters – there are lots of different ways to get your home decked out for the best VR headset.

But the problem is that picking a VR headset isn’t easy, especially now that there are more and more headsets hitting the streets like the new Valve Index and HTC’s Vive Cosmos, slated for a mid-to-late 2019 release. With many offering different experiences, different hardware, different requirements and a lot of fantastic deals, it confuses matters even more.

The good news for those serious about getting the best VR headset is that premium headsets that are built specifically for PC gaming are now much more affordable thanks to permanent price drops. The bad news is that these discounts make it even trickier to choose the best VR headset that’s right for you.

In addition to price drops, more advanced VR headsets have come to the fore, like the HTC Vive Pro. On the flip side, of course, are the mobile headsets, namely the Samsung Gear VR and Google Daydream View.

Then there’s a whole new category of standalone VR headsets. The Oculus Go led the charge, and in September Facebook unveiled and subsequently released its successor, Oculus Quest that offers six degrees of freedom tracking.

The VR space got even more of a shakeup after CES 2019, with HTV teasing the HTC Vive Cosmos, a wired VR headset that is also expected to work with your mobile at some point too. This could be a headset that transcends the wired and wireless space and makes VR more accessible than ever.

But it’s too early for the Cosmos, so let’s stick with the VR headsets you can get your hands on – and head into – right now.

Which VR headset should you buy?

Check below for in-depth explanations of our choices for the best VR headset available now, but honestly, price and platform will make most of the decision for you – there aren’t any headsets for console gamers besides PlayStation VR and, if you need a standalone headset, you’re basically stuck with the Oculus Quest.

But despite being limited in some categories, VR is making huge strides forward in terms of both performance and price thanks to some permanent price cuts have brought the so-called traditional VR headsets more closely in line with one another.

At the moment, the four best on the market – the Valve Index, HTC Vive, Oculus Quest and PlayStation VR – are unsurprisingly the most expensive of all the mainstream VR headset offerings, but there are some less expensive options if you’d rather dip your toes into VR before spending your entire paycheck.

Each headset has its own unique strengths and weaknesses, and if you’re not aware of these before you buy, it could be a very costly mistake to make. But that’s exactly why we put this guide together. 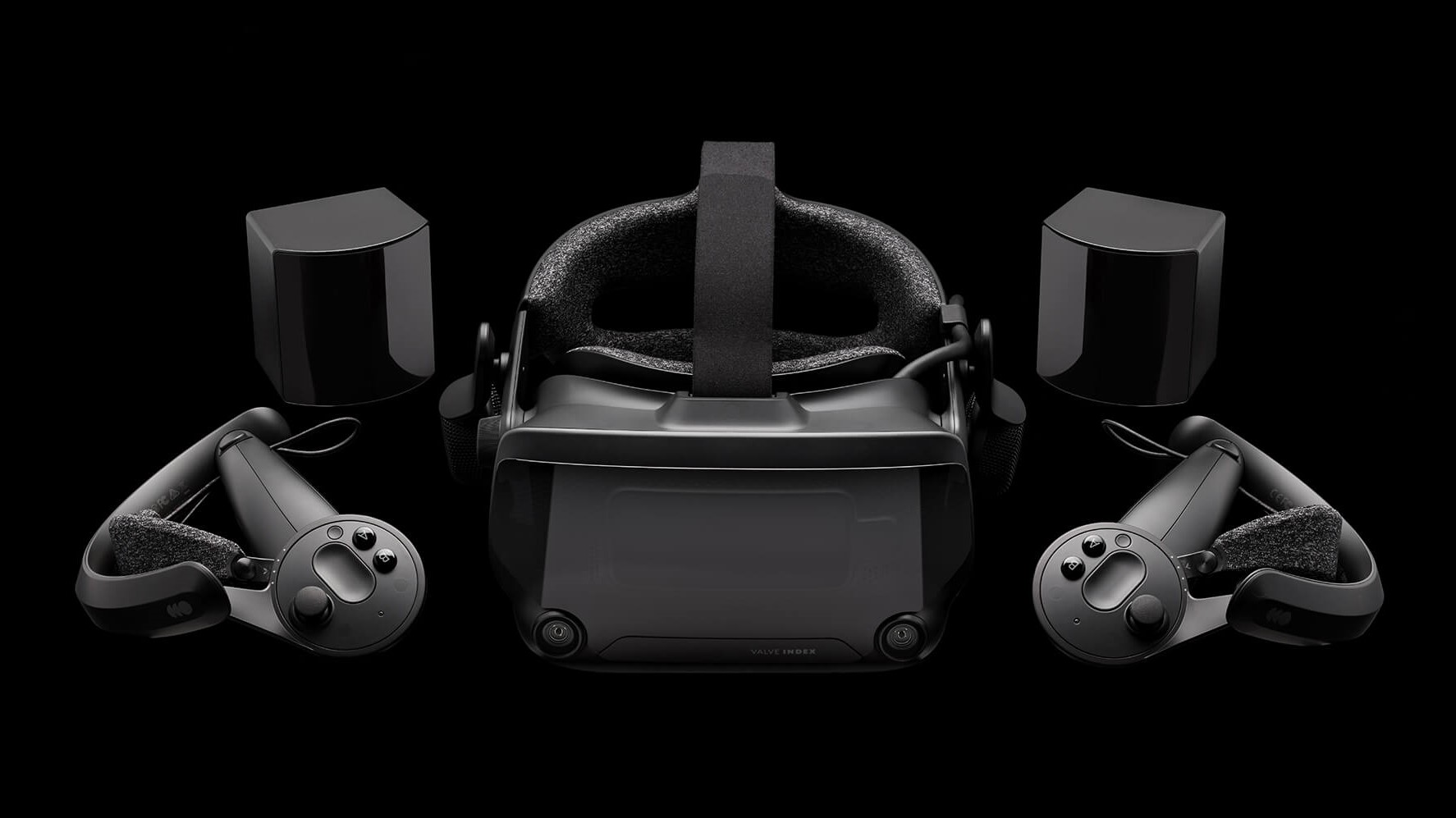 There’s little doubt that the Valve Index is the next-generation VR headset people have been clamoring for: it has an ultra-crisp display that runs fairly well even with older GPUs, a wider field of view, a higher refresh rate and Valve’s ‘knuckle’ controllers, which can track the movement of every finger.

Around the house, there’s no doubt the Valve Index will be our default VR headset going forward. It’s a significant upgrade to the HTC Vive and runs much smoother than the Vive Pro, a powerful VR headset that really struggled to deliver on the promise of high-end, room-scale VR.

And yet, while the Valve Index is the best VR headsets yet released, it’s brought some of VR’s most annoying aspects along for the ride: Setting it up can be painful, updates can cause connection issues, and you may find a new error the next time you go to use it. But, if you can look past those issues, this is a really good VR headset. Its higher-resolution screen and better refresh rate allowed us to use it for longer periods of time without discomfort, and the Index Controllers are a real step up from the ones that ship with the Vive.

It’s expensive, yes, but for the gamers who want next-level VR, the Valve Index is the only way to go. 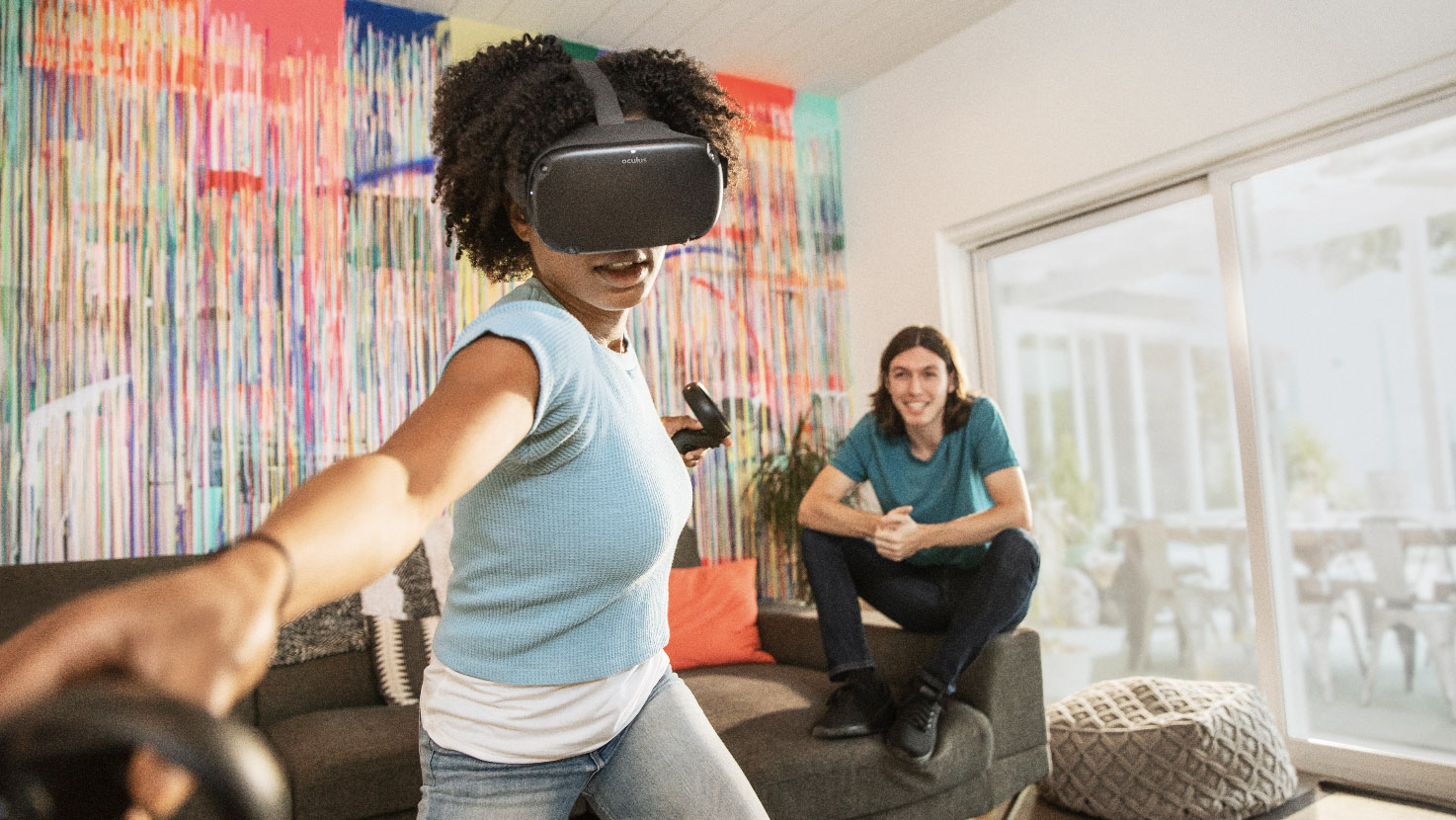 If you’re sitting at home and have the equipment to run it, there’s no better option than the Valve Index. But if you’re the kind of person who doesn’t want to be bound by cables or sunk by the debt of building a gaming PC and a $999 VR headset, the Oculus Quest is a stellar alternative.

Simply put, Oculus Quest signals a new age for virtual reality, one that doesn’t need a smartphone or PC to run excellent experiences. It has an OLED display panel with 1440 x 1600 per eye resolution and is powered by a Snapdragon 835 processor.

Unlike other headsets that require additional equipment, external sensors or a lengthy set-up process, once the Quest is charged up you can be up-and-running within a few minutes thanks to an easy set-up within the Oculus mobile app. Even better, if you have Oculus games in your library already, some can even be played on the Oculus Quest – though, that’s not always the case.

Oculus Quest isn’t perfect, however – in addition to some minor light leakage through the bottom (right where your nose is), Oculus says you can expect the Quest to last 2 to 3 hours after a full charge, depending on whether you’re watching media or playing games. That means you’ll probably have to charge the Quest in between sessions – which can be a hassle if you forget. That said, for those looking for a standalone, it’s the best option on our list. 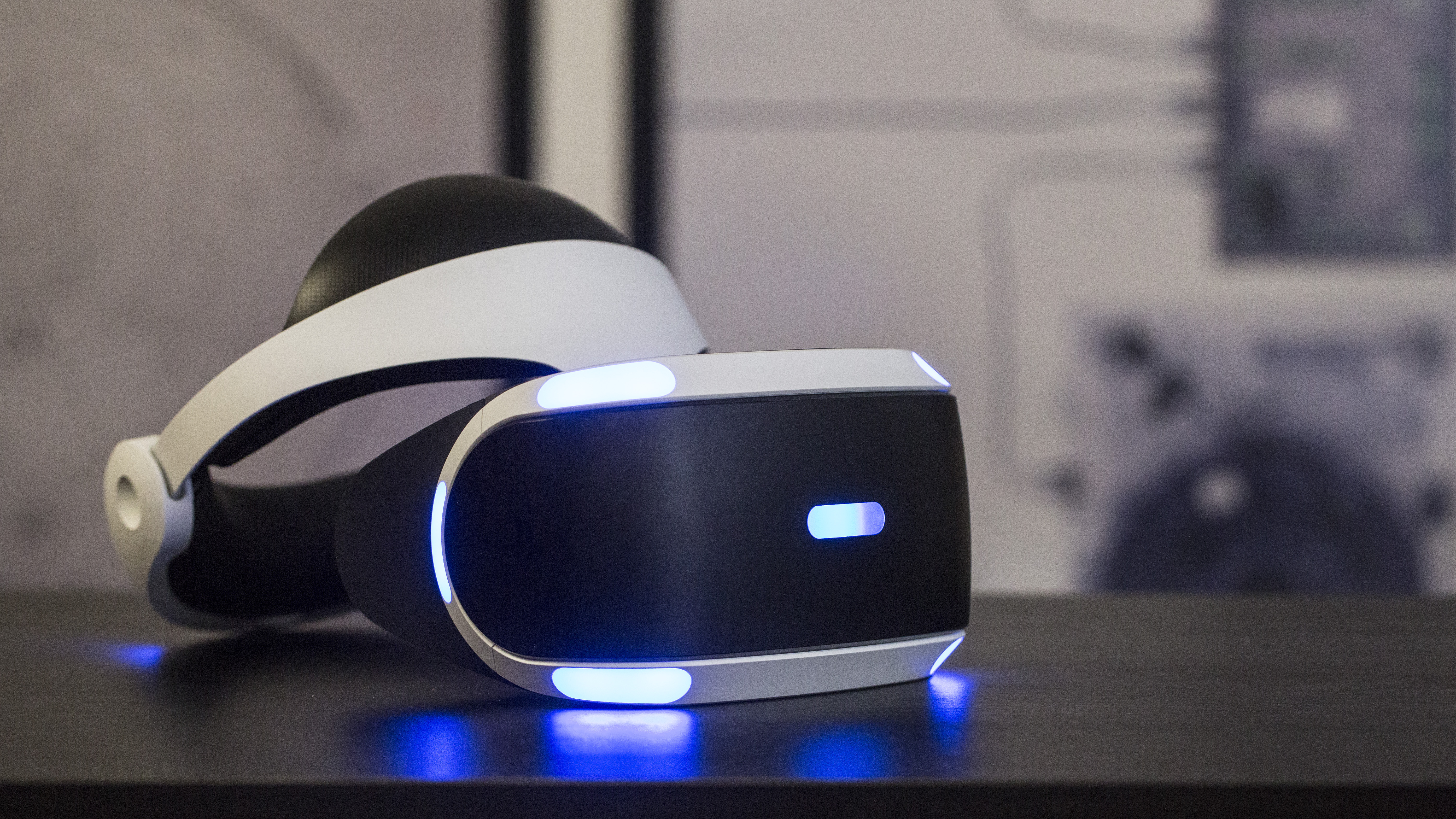 There’s no getting around the fact that in order to run either the HTC Vive, HTC Vive Pro or the Oculus Rift you need a pretty high-end gaming PC, which is not an insignificant investment for most people.

That’s not the case with Sony’s PlayStation VR, which requires little more than a PS4 console to run.

Considering the sizable difference in power between the PS4 and PC, the PlayStation VR is a surprisingly competent VR headset. Its refresh rate is responsive, and we’ve had no issues with the reliability of its head-tracking.

Thanks to Sony’s backing, the collection of PlayStation VR games is also impressive. There were dozens available at launch, and many more have followed over its first year on sale.

Sony has addressed one of our biggest objections with the PlayStation VR – that its accessories are sold separately – by offering a variety of packs and bundles with devices like the PlayStation Camera included. However, PlayStation Move controllers, while included in some bundles, aren’t in everyone.

While you have to be aware of the additional cost involved, depending on what bundle you opt for, recent price cuts have made the PlayStation VR even more affordable. It may not be the best VR headset, but the PSVR is certainly making a strong case to users. 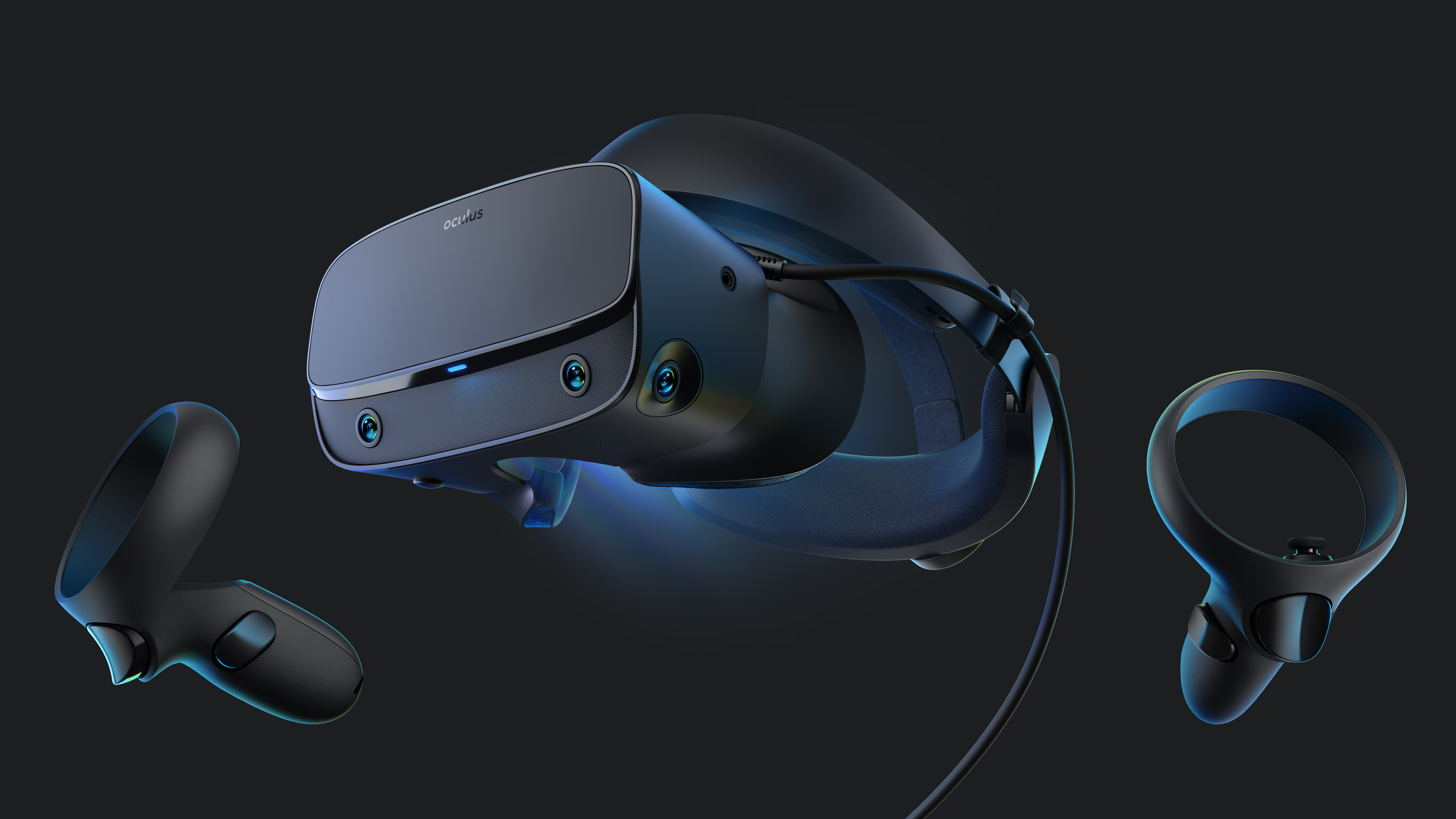 Virtual reality has come on leaps and bounds since Oculus founder (and controversial VR poster boy) Palmer Luckey first introduced the world to the Oculus Rift back in 2012. Now owned by Facebook, the Oculus Rift S should represent the next leap forward for the company’s high-end, PC-based virtual reality experiences – but, unfortunately, it’s more of a baby-step.

Like the Oculus Rift, the Rift S works in tandem with a PC to deliver virtual reality experiences. It connects to your PC over a USB 3.0 port and a DisplayPort connection and is tethered to the machine by a lengthy cable that’s more than enough to accommodate the ‘room-scale’ experiences that Rift S is capable of delivering. It’s more limiting in terms of free movement than the superb wireless Oculus Quest, but the trade-off here is that, by being powered by your PC, it’s capable of powering more detailed and dynamic experiences.

In many key respects, it betters the original Oculus Rift. It’s easier to set up, potentially more comfortable to wear, has a much more robust games library than it did at launch, and an improved resolution. But, unfortunately, Oculus has had to sacrifice greater audio and refresh rate to do that. 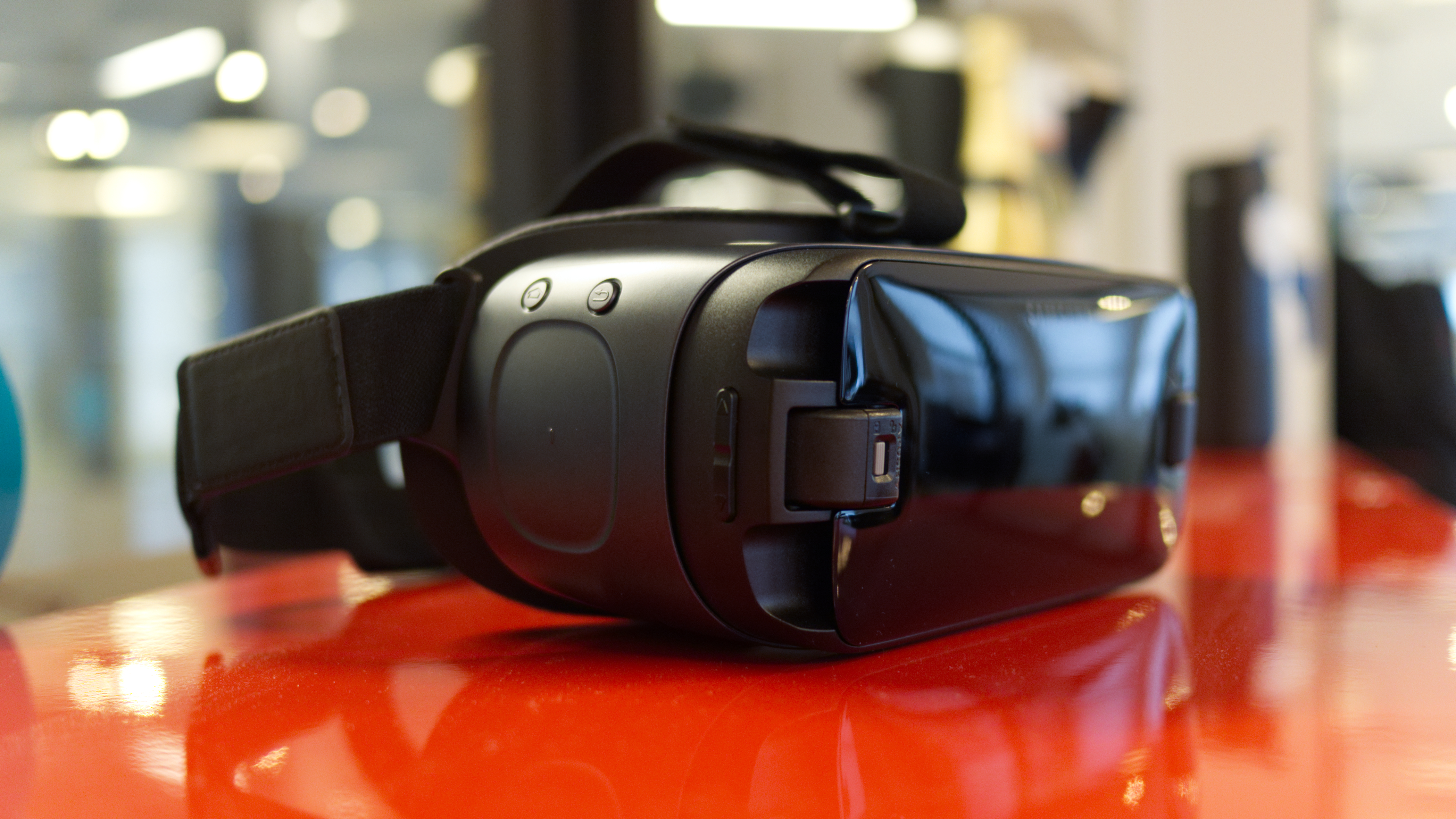 Samsung Gear VR has always been a respectable smartphone-powered VR headset, but now that it has a motion controller, it might be the best VR headset option for mobile users.

In addition to the new controller, the updated Gear VR is lighter and more streamlined than before and features a USB-C connector that connects directly to a Samsung Galaxy phone.

The included motion controller has hints of the HTC Vive controller design, with a touchpad and trigger button, which aren’t bad things. It’s with the controller that the Gear VR really comes into its own, allowing you to interact with the VR worlds in front of you in a way previously impossible without it.

Of course, being powered by a smartphone, the headset’s performance is entirely tied to the phone you’ve slotted in, though in our experience this isn’t a problem considering the power within Samsung’s higher-end handsets. However, if you’re using an older Galaxy phone, your experience could be noticeably affected.

Since Oculus launched the Oculus Go standalone headset, the question of where smartphone-powered devices like Gear VR fit in only becomes more relevant. But since the Oculus Go and Samsung Gear VR share an app and game library, you can expect support for the Gear VR to continue for quite some time. 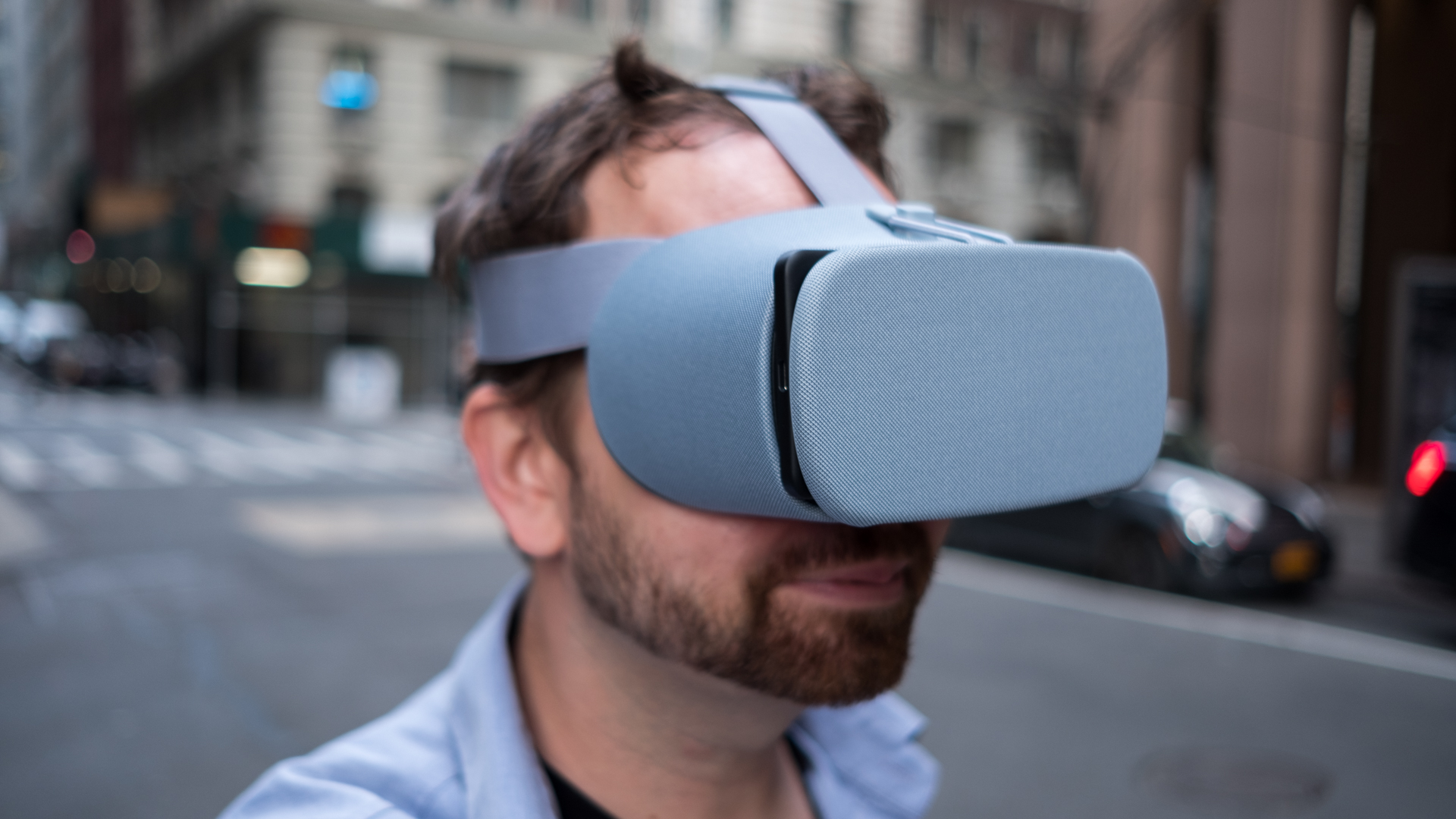 If you own an Android phone (that’s not necessarily a Galaxy) and want to get into VR without spending a fortune on a headset and computer set up, then consider the Google Daydream View (2017) a viable option.

What makes this headset compelling is its price; it’s less than $100 / £100, and a recent discount through some retailers has made it even cheaper, at least for the time being.

It’s also an easy headset for just about anyone to use. Not only does it just installing an app on your phone, but once you’re inside the VR world, navigating to and fro is easy with the included controller.

You won’t get the deeply immersive worlds of a higher-end, PC-powered VR headset with the Google Daydream View, but you will get a device that’s made of a nice material, works with many of the best Android phones, and, did we mention how inexpensive it is?

The content on offer isn’t very compelling – there’s not a ton to draw you back for multiple play sessions – but it is varied and offers a little something for everyone.

This isn’t the best VR headset on the market, by far, but it is an easy way to get into VR for Android phone owners. And that, really, could be all you need to know.

iPhone, laptops, the Apple Watch, and more in 2021

The skills leaders need to survive in the age of AI