CyberiansTech
Home Tech 5G in the UK: Everything you Need to Know

5G in the UK is here! Or, at least, it is in a few places, and we know when it will be in many more, which is half the battle.

The 5G networks in the UK are launching in a very staggered manner, as some have been available since May 2019, and others will only be available November 2019 or later. Even with networks that have launched, the networks aren’t available nationwide, and on top of that most phones don’t support 5G yet, so most people can’t take advantage of the new, super-speedy connectivity yet.

Thankfully we’ve got all the information you need to ensure a smooth transition onto the 5G superhighway. So grab your phone, buckle up and prepare to merge into the fast lane.

If you’re not interested in the nitty-gritty and already have your heart set on a 5G phone and plan, we’ve collected the best 5G deals in the UK for you.

EE was the first network to launch 5G in the UK on May 30, 2019, and it’s since been joined by Vodafone, which turned on its service on July 3. For now, these are your only two real options for 5G in the UK.

Three technically offers a 5G network as of August 19, 2019, but only for home broadband, and only in parts of London – it will, however, expand to phones at some point before the year is out.

We’re still waiting for O2 to roll out it’s 5G offering, but its network is set to go live in October. Meanwhile, BT (which will use EE’s network) has confirmed it will launch 5G this autumn.

Whichever network you opt for you will need a new 5G phone and in most cases a new 5G contract to take advantage of it, as well as needing to live or work in an area that has 5G coverage.

Initially you can get EE 5G in six cities in the UK, with London, Edinburgh, Cardiff, Belfast, Birmingham and Manchester the lucky recipients, but the network has committed to rolling out 5G to 10 more cities before the end of the year.

However, at launch EE’s 5G coverage does not reach all areas of every city. We’ve tested it out in London, and found that it’s not consistent. In areas where 5G is available though, we’re consistently getting speeds of around 200Mbps (versus around 15-20Mbps on 4G devices).

EE has five 5G smartphones for you to choose. The cheapest is the Oppo Reno 5G, the priciest are the Samsung Galaxy S10 5G and LG V50 ThinQ 5G, while the OnePlus 7 Pro 5G and Huawei Mate 20 X 5G sit in the middle of the group.

You can also pre-order the Samsung Galaxy Note 10 Plus 5G at the time of writing.

We got our hands on the OnePlus 7 Pro 5G on launch day and have been testing out the speed of EE’s shiny new network.

While top speeds of over 1Gbps are quoted, in reality, we’ve seen speeds more consistently around the 200-400Mbps threshold – still comfortably faster than average 4G speeds.

The fastest 5G speed we’ve managed to achieve in London is 550Mbps, and in that location, we downloaded an hour-long, 1GB, high-quality video from Amazon Prime in 43 seconds.

So how much is EE asking for the first taste of 5G in the UK?

Vodafone is the second carrier to launch its 5G network in the UK, which went live on July 3, 2019.

Vodafone 5G is now live in 15 locations, which includes the 7 launch cites of London, Glasgow, Manchester, Liverpool, Birmingham, Cardiff and Bristol, which have now been joined by another eight in Birkenhead, Bolton, Gatwick, Lancaster, Newbury, Plymouth, Stoke-on-Trent and Wolverhampton.

It’s not done there though, as Vodafone has also promised to bring 5G to a further seven locations before the year is out. The lucky locations are: Blackpool, Bournemouth, Guildford, Portsmouth, Reading, Southampton and Warrington.

So far, Vodafone has three 5G smartphones on offer, with the Xiaomi Mi Mix 3 5G, Samsung Galaxy S10 5G and Huawei Mate 20 X 5G all available to buy now. The Samsung Galaxy Note 10 Plus 5G is also up for pre-order.

So how much is Vodafone asking for its 5G services?

Three launched its 5G network on August 19, 2019. However, initially, it’s only offering 5G home broadband, with its mobile 5G proposition arriving later in the year.

Three currently only offers 5G in parts of London, however, it says it will launch 5G in 24 additional towns and cities around the UK by the end of the year.

Three also claims that it aims to provide 5G coverage to 80% of its network traffic in three years.

Three already sells the Huawei Mate 20 X 5G, despite not having a live 5G mobile network yet. It will additionally be stocking the Samsung Galaxy Note 10 Plus 5G when that phone launches, and plans to sell the Samsung Galaxy S10 5G and Xiaomi Mi Mix 3 5G.

Three plans to offer 5G at no extra cost. Of course, 5G handsets are expensive in their very nature, with Three’s only current offering, the Huawei Mate 20 X 5G, starting at £48 per month at the time of writing.

All O2 has confirmed so far is that it will launch its 5G network in October 2019.

O2 has confirmed its 5G network will initially go live in London, Cardiff, Edinburgh, Belfast, Leeds and Slough, and the carrier has said it plans to have 5G live in 20 cities and towns before the end of 2019. The additional 14 locations include:

It also said it plans to spread its 5G network to 50 locations by summer 2020, which would include Milton Keynes, Birmingham and Brighton.

However, it’s worth noting that the first areas in cities O2 will bring 5G to will be social hubs like sports stadiums, shopping malls, transport hubs such as train stations, and music venues, and it suggested that it could be several years before there’s dense residential penetration.

Previously, O2 had said it would stock the Huawei Mate 20 X 5G, but it now appears that won’t be the case, at least initially, due to Huawei’s ongoing issues in the US.

Wondering what a 5G phone on O2 will cost you? You can see current offers below – though note that this is for a 4G plan (you’ll be able to move to a 5G one once the service is available).

Sky Mobile has confirmed its 5G network launches in November, but we don’t know exactly when just yet.

Since Sky Mobile uses O2’s network, it will launch in exactly the same cities – Cardiff, London, Edinburgh, Belfast, Slough, and Leeds. There’s no word on expansion plans for now, though.

Sky Mobile will be ranging the Samsung Galaxy S10 5G, Samsung Galaxy Note 10 Plus 5G, and the Huawei Mate 20 X 5G initially, and again there’s no word on what other smartphones will be available. 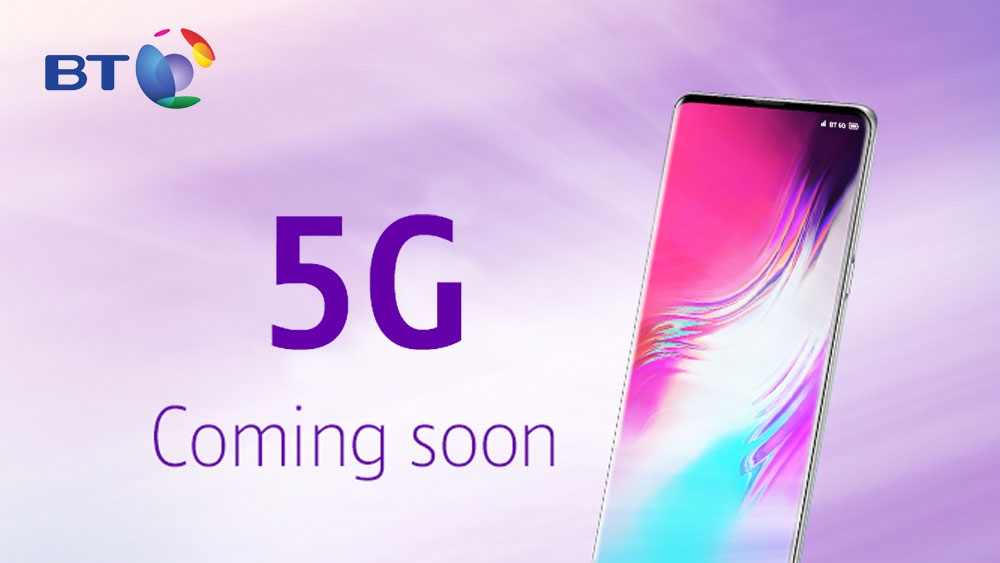 BT has confirmed that it will launch its 5G offering this autumn, but there’s no exact date just yet.

BT 5G will be using EE’s network, so it will be available where EE’s 5G coverage is. That means you’re likely to get coverage in London, Edinburgh, Cardiff, Belfast, Birmingham and Manchester at the very least, from launch.

BT hasn’t announced which 5G phones it will be ranging.

BT hasn’t announced how much its 5G plans will cost.

The Best gaming keyboard in 2021