It could be said that 5G is no longer a ‘new’ thing, as some countries have had 5G networks for months now, but most of the world still hasn’t been graced by its presence, and as the networks slowly roll out, so do the 5G phones you’ll need to make use of the fast speeds.

It won’t take long though for 5G smartphones to take over, as during CES 2019 at the start of the year, smartphone chip-maker Qualcomm said it expects to see over 30 5G devices launched in 2019, with most of those being smartphones.

It looks like Qualcomm might be right – new 5G phones keep getting launched, and although they’re nowhere as popular as 4G phones still, 5G users at least have a choice of new phones to whet their appetite.

With that in mind we’ve listed all the various confirmed and rumored 5G phones we’re expecting to see over the coming months and years.

You’ll find everything we know about these phones below, including when and where they’re likely to launch, and we’ll be constantly updating our 5G phones list with all the latest information.

As well as 5G connectivity, the phone has a 6.7-inch QHD+ screen, a 4,500mAh battery, a top-end chipset, 8GB of RAM, and four rear cameras, consisting of a 16MP ultra-wide lens, a 12MP variable aperture lens, a 12MP telephoto lens and a 3D depth-sensing camera.

The Galaxy S10 5G also has a dual-lens front-facing camera (cut into the screen, so there’s no notch and minimal bezel), and 256GB of storage. 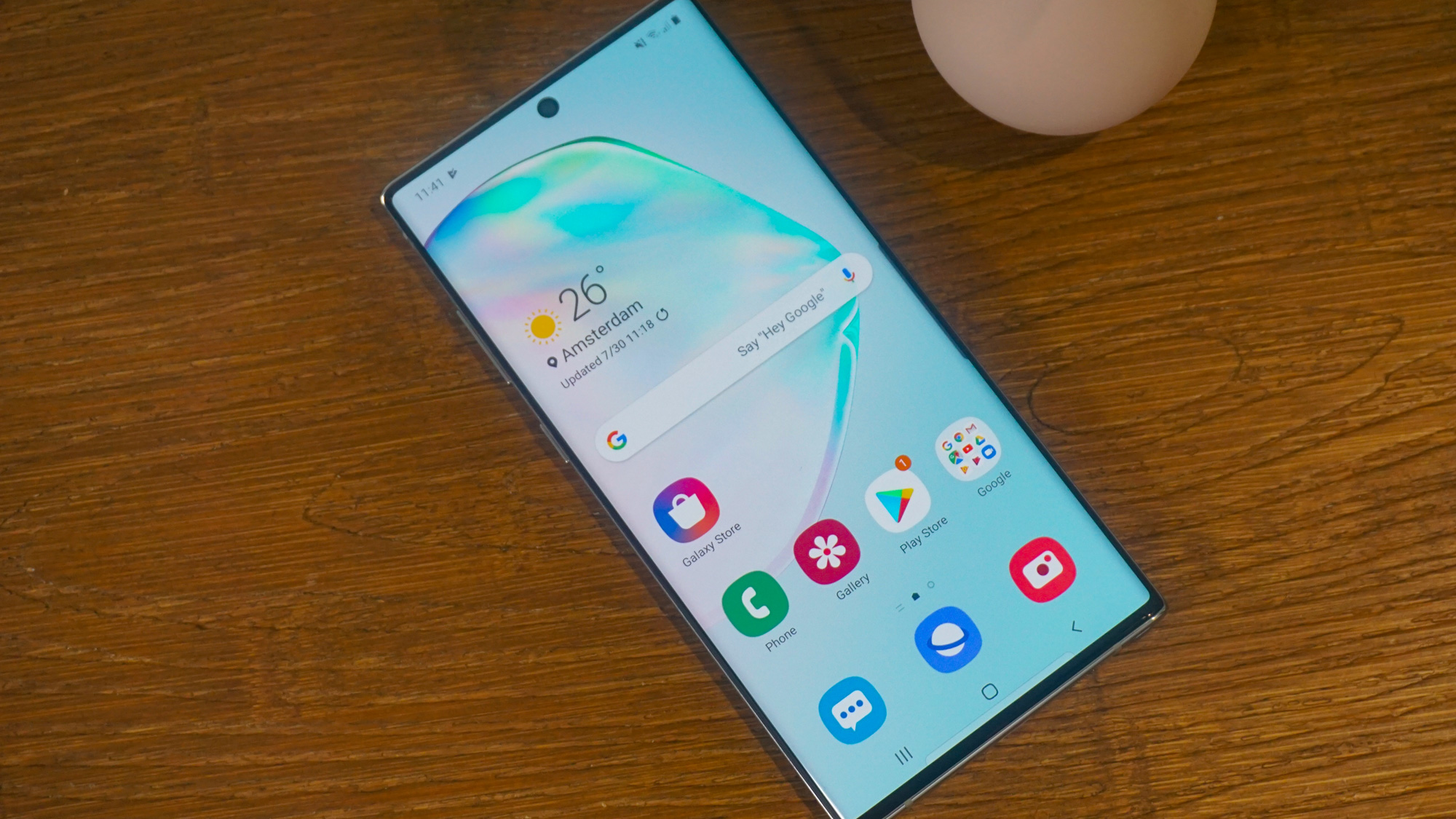 When OnePlus launched the OnePlus 7 and OnePlus 7 Pro, it also announced a 5G version of the latter phone, which is exactly the same in all regards (except that it can connect to 5G networks as well as 4G).

That means the OnePlus 7 Pro 5G has a curved all-screen AMOLED display, novel pop-up selfie camera, Snapdragon 855 chipset, and 90Hz screen refresh rate. It will set you back quite a bit too – in the UK, for example, it starts at £59 per month on contract, where it’s currently only sold by EE.

Motorola was the first in the world to sell a 5G phone. Well, sort of anyway, as what it actually sells is the Moto Z3 (a 4G handset from 2018) paired with a new 5G Moto Mod, which adds 5G connectivity to the phone.

At the time of writing this is only available in the US and only on Verizon (which only currently has a 5G network in a few places), so it’s limited, but technically available.

The Moto Z3 and Moto Mod combined actually also undercut most other 5G handsets, though of course the phone itself is also more dated. The initial 5G service available on the phone is a mixed bag too.

The Moto Z4 is a similar story to the Moto Z3 in that it supports 5G but only with a Moto Mod. It launched on June 13 in the US.

Huawei announced the Huawei Mate X at MWC 2019 – a phone that not only supports 5G, but also folds.

It essentially has three screens, with one big 8-inch OLED display that can be folded in half, leaving you with a smaller screen on each side of the handset, one of which is 6.6 inches and the other 6.4.

We don’t know when we’re going to be able to get our hands on the device, as Huawei has postponed its release date – the latest rumors say somewhere between September and November, but we’ll keep you updated.

That means it’s a phone with a huge 7.2-inch screen and triple-lens camera setup, however it’s set to have a smaller battery capacity at 4,200mAh. That’s still a large power pack, but it doesn’t compare to the 4G phone’s 5,000mAh.

This was expected to release alongside 5G networks, but Huawei’s Android problems saw it delayed, as many UK networks dropped the company’s phones from their 5G launch rosters. However, it is now available on EE, Vodafone and Three.

Additionally, Huawei has revealed that it is “considering” making a 5G version of the upcoming Huawei Mate 30.

There’s also both an 8MP standard lens and a 5MP wide-angle one on the front of the phone.

The LG V50 ThinQ also has a 4,000mAh battery, and it should be built to last, as it’s both IP68-certified (for dust and water-resistance) and sports military-grade drop protection. There’s also an optional second screen attachment in the form of the LG DualScreen.

The Xiaomi Mi Mix 3 was launched a while ago, and while the standard version doesn’t support 5G, a 5G model has now been launched too.

A big highlight though could be the price, as at €599 (around £520 / $680 / AU$950) it could undercut most of the first wave of 5G handsets. It’s currently available from Vodafone in the UK, starting at £50 per month with £99 upfront. It’s not clear whether there will be US or Australian availability.

The Oppo Reno 5G has arrived in Australia for AU$1,499 outright, or you can you get it on contract through Telstra. In the UK it’s available on EE.

Apple will of course eventually launch a 5G phone, but it’s not going to be one of the first companies to do so.

As of August 2019, the latest news on that front is that Apple is likely using Qualcomm for 5G modems. Apparently, it was using Intel, but the company has abandoned plans for 5G modems after reportedly missing deadlines.

While we might be waiting a while, the good news is that whenever Apple launches its 5G iPhone it’s likely to be globally available, since iPhones are sold in most countries.

Given that Huawei has launched a 5G phone it’s not overly surprising to hear that Honor is working on one too, given that this is a sub-brand of the company.

The latest news on that front comes from an interview with Honor’s president, who said the phone is coming in the fourth quarter of 2019 and that it will be cheaper than Huawei’s 5G phones.

As well as the Mi Mix 3 5G, it looks like Xiaomi will launch a 5G phone under its Black Shark banner and it will probably land this year according to Black Shark’s VP. This seemingly won’t be the Black Shark 3 though, as it will apparently land before that phone, so it might be a 5G version of the Black Shark 2, but that’s not yet confirmed.

Set to supposedly land in Europe at some point, this phone has already launched in China and has a Snapdragon 855 chipset, an in-screen fingerprint scanner, and a trio of rear cameras, namely a 48MP standard lens, a 20MP wide-angle lens and an 8MP telephoto lens.

There’s also a 20MP front camera, a 6.47-inch FHD+ AMOLED screen with a notch, 6GB of RAM, a 4,000mAh battery and 128GB of storage. Pricing and exact availability is still to be confirmed.

Vivo is also known to be working on a 5G phone thought to be called the Vivo iQOO Pro 5G, but as yet we don’t know much about it. The company has also teased that the Vivo Nex 3 will support 5G.

We wouldn’t count on either phone being widely available though, since most Vivo handsets aren’t.

Sony has confirmed that it will make a 5G phone, but only when the tech rolls out. The company hasn’t got more specific than that yet.

However, there are rumors that it could be a foldable phone called the Sony Xperia F. This would apparently have a 21:9 screen and a clamshell design.

The foldable Royole FlexPai launched globally during CES 2019 at the start of 2019, and while it’s not 5G enabled right now, a software update later in the year will unlock support for the fifth generation of network.

You can buy the FlexPai now, however it’s expensive and we found during our hands on time with the phone that the software needs some serious polish before we’d be able to think about recommending it as a viable everyday device.

We’ve heard a rumor that Samsung has a third 5G phone in the works, in the form of the Samsung Galaxy A90, which will be the brand’s – and perhaps the world’s – first affordable 5G phone.

We don’t know much about the handset other than that, and at the moment it’s only a rumor, but we’d expect affordable 5G phone to hit the market by the end of 2019 or beginning of 2020.

Mobile or Wi-Fi does not harm health