A year after Doom: Eternal debuted, we’ve seen a lot more about the sequel to the much-loved 2016 reboot. The new game looks even faster, more frenetic, and more gore-filled than its predecessor – which you can discover when Doom: Eternal comes out on November 22, 2019.

Few franchises embody the FPS genre quite like Doom. Packed to the seams with blood, hellfire, shotguns, and even more blood, id Software’s ultra-violent shooter has earned legions of fans since its first game in 1993: pitching a nameless marine against hordes of demons unleashed from hell.

Now, two years after a 2016 reboot brought the franchise successfully to modern consoles, we have a word of a direct sequel: Doom Eternal. The sequel will have the single-player mode continuing where the first game left off: DoomGuy has been teleported to an unknown location and it’s up to them to save a demon-invaded Earth.

[Update: Bethesda has released a new trailer for Doom Eternal’s multiplayer Battle Mode. Check it out below. ] 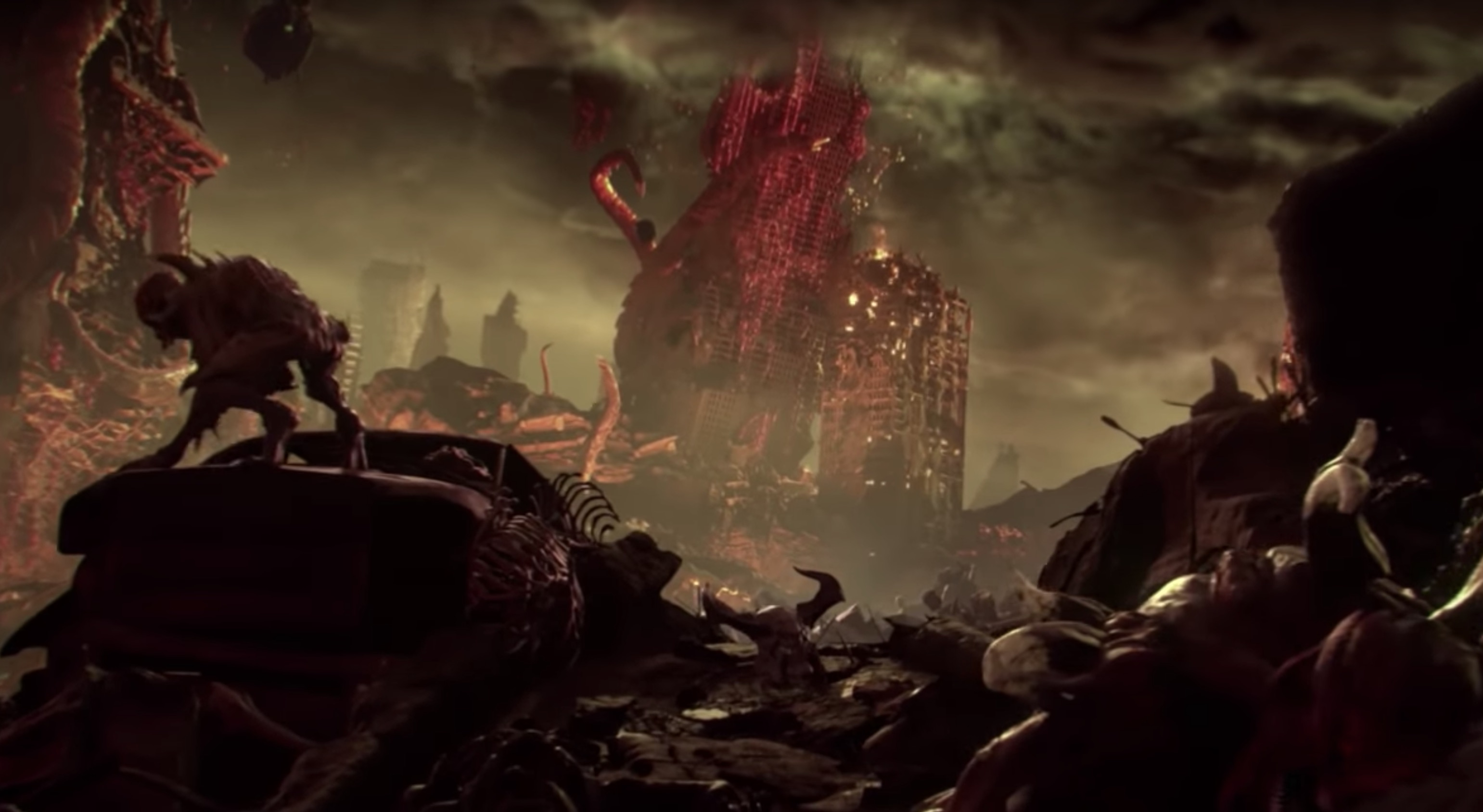 At E3 2019, Bethesda officially announced that Doom Eternal will release on November 22, 2019 for PS4, Xbox One, Nintendo Switch, Google Stadia and PC.

Check it out below:

E3 2019
Bethesda’s E3 2019 keynote included a big, bad trailer with even more incredible action, giving us a little more info on the story to come in Doom: Eternal. Y’know, so it’s not just guns and gore.

Bethesda also revealed Battle Mode, a 2-demons-vs-1-Doomguy versus mode for 3 players. Even if they don’t introduce a multiplayer mode, this is a neat little addition to shake up the carnage.

You can check out the gameplay trailer below:

E3 2018
Doom Eternal’s E3 2018 trailer had everything we love about the series, dialled up to 11. Get a glimpse of its apocalyptic vision of Earth, with a suitably thumping soundtrack and some jacked-up demons staring down the barrel of a shotgun.

Doom Eternal’s battle mode will have six unique maps at launch, each designed to allow the Doomslayer and demons to partake in a hellish game of cat and mouse. These arenas include portals, monkey bars and jump pads to make play as dynamic as possible – and fun obviously.

But what demons are available for you to play as? At launch, there will be five playable demons: the Revenant, Pain Elemental, Mancubus, Marauder and Arch-vile. Each demon has its own particular abilities, strengths and weaknesses to harness against the Doomslayer. While some are more hard-hitting, others focus on stealth.

id Software emphasises that it’s important for the playable demons to work together to best the Doomslayer, as a demon alone is an easy target for the BFG.

When it comes to the Doomslayer themselves, you’ll be fully-loaded with all mods available. Like in the single-player campaign, you will need to manage spawning demons as well as resources – not to mention your player foes.

As the demons it is your job to kill the Doomslayer to win, while the Doomslayer has a harder task at hand. The Doomslayer must kill both playable demons, but this is where it gets tricky: When you kill one demon, they have the chance to respawn after a certain amount of time if you don’t kill the other within that time limit. If a demon does respawn, it will do so with half health.

Between rounds, players will be able to upgrade their demons and Doomslayer to make things a bit more difficult – like it wasn’t already,

From what we’ve seen, battle mode certainly looks like it will be a blast and we can’t wait to get our hands on it. 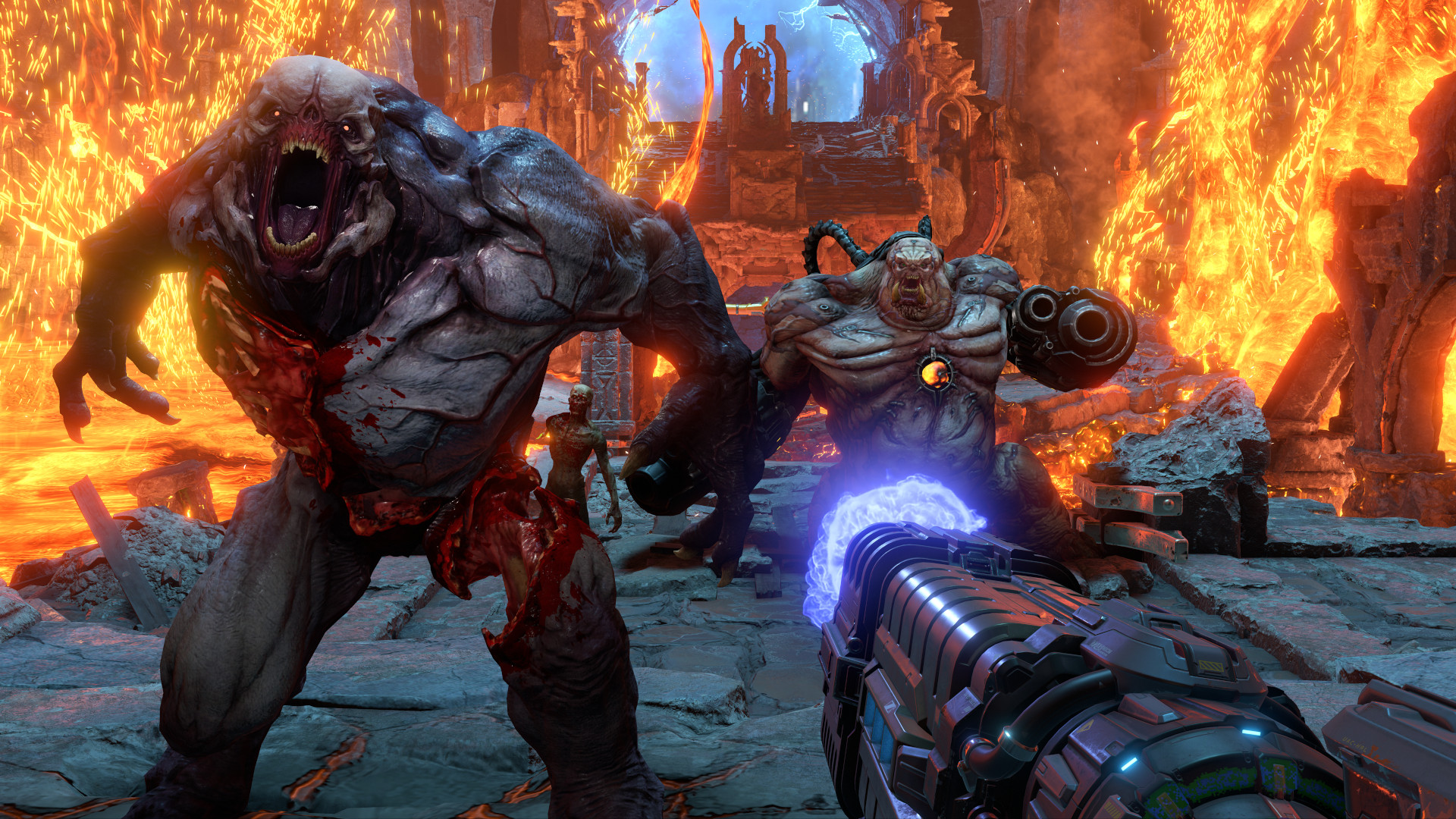 Stadia launch title
Google is entering the gaming fray via its new streaming service, Stadia, and it’s bringing Doom Eternal with it. The iD shooter will be a launch title for Google Stadia. It will allow you to stream the game at maximum PC gaming graphic quality levels in 4K resolution and at 60fps to any screen capable of running the Chrome browser, or connecting to a Chromecast dongle, with apparently little latency. It’s not yet certain how much it will cost to access Doom Eternal through Stadia, or when the service will launch beyond a vague “2019” window.

Slayer 2.0
The team has created the most powerful Doom Slayer we’ve seen yet, with enhanced armor and an arsenal of badass new equipment, including a shoulder-mounted cannon with flamethrower, an extendable blade, and a new dash ability. In addition, there’s an upgraded selection of guns and mods to play with, such as the Super Shotgun’s new Meat Hook attachments which pulls you into the face of enemies.

A host of new demons (and returning favorites)
Doom Eternal will see the return of classic demons such as the Pain Elemental, Archvile and Arachnotron, alongside an array of brand-new demons like the Doom Hunter and the corrupted Marauders.

Invasion
An all-new Invasion mode allows other players to invade your campaign as a demon. Likewise, you can join the demon horde yourself and invade other players’ campaigns – either alone or as part of a hunting party.

Or will we see a VR version?
The last Doom came to the HTC Vive and Playstation VR last year, albeit with some clunky navigation issues and a comparatively stripped-back three-hour story. The upcoming sequel is the perfect opportunity to build on that foundation and make a VR experience deserving of the legendary IP.

Could we see it on the Switch?
Seeing a bloodthirsty rampage like Doom Eternal on Nintendo’s family-friendly Switch seems like an odd match, but Bethesda has confirmed Doom Eternal will indeed be coming to the Nintendo Switch.

Keep checking back here for all the latest Doom Eternal news.

What is a Cisco Certified Network Professional Job?

Once Upon a Tower Tips Advanced Strategies