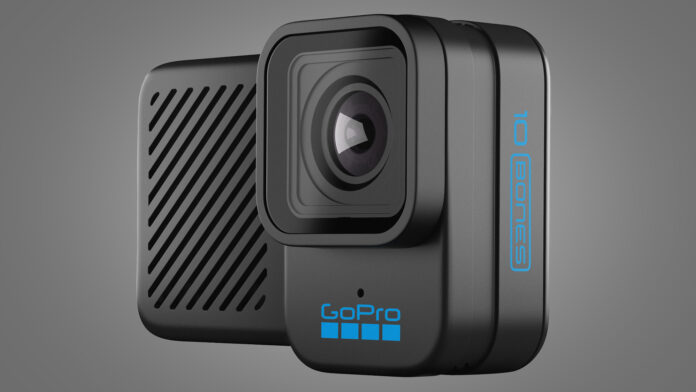 GoPro has built its lightest-ever action camera for FPV (first-person view) drones in the form of the Hero 10 Black Bones – a stripped-down version of its flagship Hero that weighs only 56g.

The Hero 10 Black Bones is the camera that FPV pilots have been crying out for (although it’s currently only available in the US), thanks to its combination of Hero 10 Black image quality and that super-lightweight body.

This means it can be mounted on small, agile FPV drones that are in the 3-inch class (or above, with that measurement referring to the propellor size), which are usually too small for traditional GoPros.

Naturally, GoPro has had to cut corners to achieve that weight, with the result that the Hero 10 Black Bones is lighter than a pair of Airpods Pros in their case. Unlike the standard Hero 10 Black it has no display, battery, speaker, GPS, or metal enclosure, with the camera coming with a plastic, well-ventilated shell instead.

The idea is that FPV pilots can plug one of the best action cameras into their existing drone setups without the unnecessary weight of those extra parts, while benefitting from the 5.3K/60p video quality and stabilization that have made GoPros so popular among FPV pilots.

Many FPV pilots actually turn off GoPro’s excellent HyperSmooth stabilization, and iron out any wobbles in post-production using ReelSteady, which GoPro acquired in March 2020. With this in mind, GoPro has now folded ReelSteady into its revamped GoPro Player desktop software (now called GoPro Player + ReelSteady), and includes a license for it with the Hero 10 Black Bones.

Further good news for FPV pilots is that the Hero 10 Black Bones retains its sibling’s replaceable lens covers, which means you swap in ND (neutral density) filters when needed. These are often used by FPV drone pilots in bright conditions to help maintain ideal shutter speeds for video.

The new action cam can be mounted on drones using a single screw, or by using the bundled adapter for GoPro mounts. There are two buttons on the camera itself, and it can also be controlled using the Quik app, GoPro’s The Remote accessory, a drone’s transmitter, or QR Codes generated by GoPro Labs (software that lets you test experimental GoPro features).

The only downsides of the GoPro Hero 10 Black Bones are that it’s currently US-only and also pretty pricey. GoPro told us that it “does not have a date yet for international availability”, which suggests that a global launch is at least possible. If you’re in the US, you can buy it now for $399.99 (if you get it with a one-year GoPro Subscription), or $499.99 without a Subscription.

Considering that the Bones version of the Hero 10 Black lacks so much of its sibling’s hardware (including a screen and battery), that price tag seems quite steep. But right now that’s the price you’ll have to pay for what is likely the best FPV drone camera around.

Analysis: GoPro returns to the skies

Four years ago, GoPro had to discontinue its ill-fated Karma drone – so why has it returned to aerial videography? The Hero 10 Black Bones is certainly more niche than the Karma, but it’s a more sensible launch that’s likely to prove popular with the growing FPV drone community.

Until now, FPV drone fliers have effectively been reverse-engineering recent GoPro models to create what are known as ‘naked GoPros’ for their small, speedy drones. This is because FPV drones need to be as small and light as possible to achieve the dynamic shots that are increasingly going viral on social media.

Recently, we’ve seen FPV drone videos of Tesla’s new Gigafactory and a bowling alley widely shared on Twitter and Facebook, and those kinds of videos are the ideal match for GoPro’s action-oriented brand and video style.

GoPro previously launched a compact version of its flagship action camera in the form of the cube-shaped Session in 2016. This proved popular with FPV drone fans, so the Hero 10 Black Bones can be seen as its natural successor – albeit with a more niche appeal and, for now, US-only availability.

Given its lack of a screen, battery, GPS or GoPro’s trademark rugged build quality, it’s a shame that the Hero 10 Black Bones isn’t a little more affordable. But given how long FPV drone pilots have been asking for a stripped-down Hero camera, it will still likely fly off the shelves in the US.