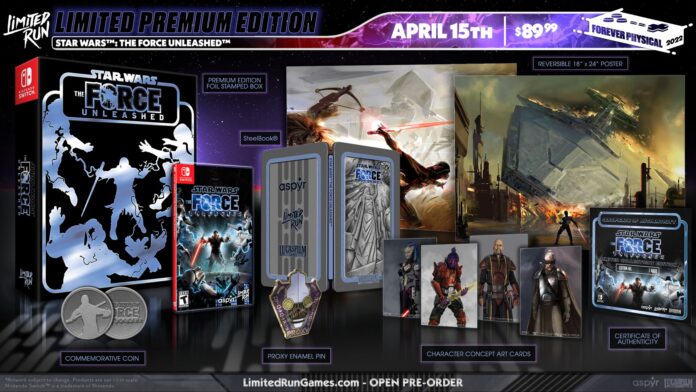 Lightsaber beat ‘em up Star Wars: The Force Unleashed will release on Nintendo Switch later this month and receive a limited-run physical printing, including a hefty collector’s edition.

The Force Unleashed Nintendo Switch port was first announced by developer Aspyr as a digital release, but video game distributor Limited Run Games has unveiled a physical version that will only be available in restricted numbers. A standard box copy will be available, alongside two special editions.

The Premium Edition includes art cards, a reversible poster, a coin, an enamel pin of holodroid character Proxy, and a steelbook case. That’ll set you back a cool $89.99 – about £69 / AU$120.

But the master edition is the main event. It includes all the goodies of the premium edition, plus a miniature replica of protagonist Starkiller’s lightsaber hilt, a model holocron (those glowing palm-sized cubes that people in the Star Wars universe use to store information), as well as a hardcover strategy guide. The beast will cost you a tidy $174.99 – about £133 / AU$232.

The physical versions of the game will only be available to buy until May 29 this year. They’ll go up for pre-order on April 15, ahead of the game’s release on April 20.

If you were obsessed with the Force Unleashed when it was released back in 2008, you might be taken by this huge, limited-printing master edition. But $175 is a lot of dosh to spend on a nearly 15-year-old game, even if it does come with a model lightsaber. Whoever picks up this box must really love the story of Galen Malek.

The upcoming Star Wars: The Force Unleashed Nintendo Switch port won’t only introduce collectible accouterments. A few new gameplay novelties will take advantage of the console’s Joy-Con motion controls. You’ll be able to unleash a Force Push by waving the left Joy-Con, or throw your lightsaber by wiggling the right. Bring the two controllers together to unleash a storm of Force Lightning, and throw them apart to send the poor stormtroopers flying.

Additionally, a Duel mode will let you battle another player in 1 vs.1 local multiplayer fights. The mode was originally included in the Wii version of The Force Unleashed but didn’t make its way to other versions of the game.