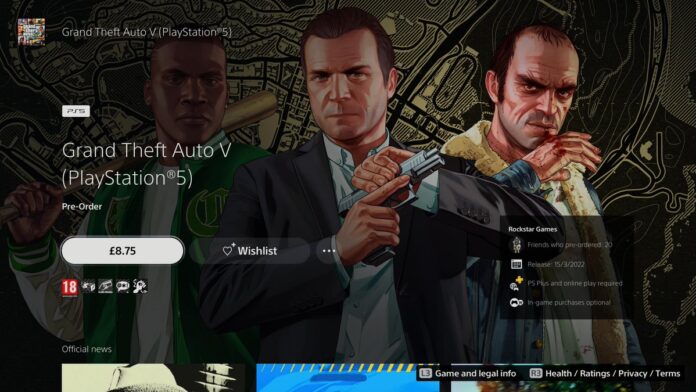 The next-gen remaster of GTA 5 will release with a massive discount on PS5, bringing the game’s price down to half that of its Xbox Series X version.

That means PS5 users can nab the game at a 75% discount in the three months after it launches on March 15, while Xbox Series X/S players will only get a 50% release discount.

PS5 players get another leg-up, too. Anyone who has played GTA 5 multiplayer on PS4 can claim the PS5 version of GTA Online for free until June 14. Xbox players get no such offer, so will have to purchase it, or the full game, again to play on their next-gen system.

While the 50% discount for Xbox Series X drops GTA 5 to an affordable level, the 75% launch day reduction on PS5 will reduce it to must-buy territory for many Rockster obsessives. $10 for a next-gen game (even a remastered one that originally released nearly 10 years ago) is a great price.

It’s little surprise that GTA 5’s price tag has been slashed to such an extent. This is the second time Rockstar has ported the game to a new generation of consoles, having re-released it on PS4 and Xbox One in 2014, and porting it to PC in 2015. Despite its continued popularity, GTA 5 is an old game that may struggle to command the impressive sales it once did. A massive launch discount is Rockstar’s way of seeding it into the new generation.

But this latest remaster isn’t without its perks. GTA 5’s PS5 and Xbox Series X/S graphics options will let you choose between three modes to cater to your system. Fidelity offers ray-tracing and 4K resolution, although is locked at 30fps, Performance maintains 60fps and 4K resolutions, while Performance RT combines the two modes for an even middle-ground between graphical fidelity and high framerates.