Update: the Samsung Galaxy Watch Active 2 might land on August 5. We also now have a much better idea of what to expect from it, including the possible battery and screen size, and the colors it might come in.

Now, here’s the weird thing – Samsung has often released a new smartwatch in August of each year, but the last 12 months have proven different as it released the Galaxy Watch Active in February around six months after the original Galaxy Watch.

We had expected Samsung to offer two lines of watches; one with top-end features and a high price tag, the other a little slimmed down but still offering lots for anyone who doesn’t want to spend as much.

That idea may have gone out the window though with lots of leaks and rumors suggesting we’ll be seeing the Samsung Galaxy Watch Active 2 around six months after the original was released.

It seems August 7 or August 5 may be the big day where we’ll hear about Samsung’s next smartwatch, and below we’re going to talk you through everything we know about it so far.

Samsung’s original Galaxy Watch Active was announced in February 2019 alongside the Galaxy S10 smartphone line, so often we wouldn’t expect to see a follow-up product until a full year later.

Rumors suggest we’ll be seeing it much before then though, with multiple sources claiming it will be introduced alongside the Galaxy Note 10 on August 7. That’s at Samsung’s own Unpacked event, where we may also get a glimpse of the company’s Galaxy Tab S6 tablet.

In fact, it might even arrive slightly earlier than that, as a leaked image shows the date August 5 on the screen, suggesting an announcement then.

If that is the case, we will likely see Samsung release the watch to retailers – and therefore wrists – before the end of August this year.

There’s no guarantee that will be the case though, as it would make more sense for Samsung to introduce a new variant of its standard Galaxy Watch first. We’d initially expected that to be called the Samsung Galaxy Watch 2, but we won’t know anything for certain until August 7.

If you’re going to know about one leak of the Galaxy Watch Active 2, you’ll likely want to see the leaked press image that you can see below.

It comes from Android Headlines and shows a device that looks remarkably similar to the original Galaxy Watch Active. You can see the two buttons on the right edge and a circular screen that lacks a rotating bezel.

There are a few little differences from the original Galaxy Watch Active that the eagle-eyed among you may have spotted. The power button has a red ring around it on this edition, which we assume is a way of distinguishing it from the original device in a similar way to what Apple did on the crown of its Apple Watch 3.

The leaked image also seems to show a leather strap rather than a silicone one, but considering this is a sporty watch we’d assume there will be a silicone option for your wrist as well.

This isn’t the first time we’ve seen that leaked design either. The video below from SamMobile shows the same design, lending credence to both leaks and meaning these may both prove accurate come launch day.

The SamMobile video does come with some extra detail though, where the sources the site spoke to claimed that an LTE version of the watch will be available at launch.

That’s a feature the company didn’t see fit to include on the original Galaxy Watch Active, so you were restricted to Wi-Fi to be able to connect to the internet on your device.

Although it’s difficult to tell from the photos, it seems the Galaxy Watch Active 2 may also come in two different sizes. Those are said to be 40mm and 44mm, which is a change from the original that only launched in 40mm.

It’s not as big as the 46mm version of the Galaxy Watch, but it’s still a step up that may make this a more appropriate device for those with larger wrists without alienating anyone looking for a smaller device.

SamMobile also claims that the watch will have a 1.4-inch or 1.2-inch screen, depending on the body size you choose, and that both will be 360 x 360 Super AMOLED displays. The battery meanwhile will apparently be 340mAh or 247mAh for the large and small sizes respectively

Supposedly the Galaxy Watch Active 2 will also have a ‘Touch Bezel’, which will let you run your finger around the edge of the screen to cycle through menus.

The chipset meanwhile is apparently an Exynos 9110 (the same as its predecessor), and it will apparently be paired with 4GB of storage and 1.5GB of RAM (if you opt for the LTE model), or 768MB of RAM if you go for the Bluetooth-only one.

Away from the design, it’s expected the Galaxy Watch Active 2 will come with some top-end features that are currently only available on the Apple Watch and a few other smaller name devices.

One of those is an ECG monitor that was first reported by SamMobile and later backed up by sources speaking to Wareable.

That would mark the first time Samsung has introduced the tech to a smartwatch, which was first included on a consumer product in the Apple Watch 4 late last year.

An electrocardiogram (ECG) is a test that can detect an irregular heartbeat, which can be a sign of a variety of different heart problems including atrial fibrillation.

According to Wareable’s report, the feature will be included on the watch but you shouldn’t expect to be able to use it at launch. It’s thought the company won’t be able to activate the feature until early 2020, and it may be a long wait for other markets too.

That same report also gives more evidence of there being an LTE version alongside a Wi-Fi only variant and a third Under Amour-branded variant as well. According to the report, it’ll come with more fitness features, but exactly what those will be are currently unclear.

Before we see the new smartwatch from Samsung, we’ve had a think about what we’d like to see the company bring to its next-gen smartwatch.

One of the ways Samsung has slimmed down the Galaxy Watch for its Active model is by losing the rotating bezel. That’s all well and good, but it’s one of the few features that make Samsung’s top-end watch unique.

Maybe Samsung can find a way to keep this easy to use the functionality on the watch without the need for a super thick bezel. Perhaps a display that stretches to the edge and works in a similar way when you drag your finger around the outside.

We don’t know exactly how that’ll work on the Galaxy Watch Active, but we’d like to see Samsung play around with a few ideas for its next smartwatch.

This is a simple one and something we brought up in our review of the original Galaxy Watch Active. It just simply needs more storage so you can fill it full of more apps and music.

Currently, you’re restricted to 4GB of data on the Galaxy Watch Active, so we’d love to see the company double that up to 8GB or perhaps – if it can find a way – squeeze in 16GB.

Another simple fix here considering the original Galaxy Watch was capable of an LTE connection if you spent a bit extra, but we’d like to see the Galaxy Watch Active 2 introduce mobile internet.

This way you’d be able to keep using your watch even when your phone isn’t around, which is a big deal for anyone who wants to use it when out running. 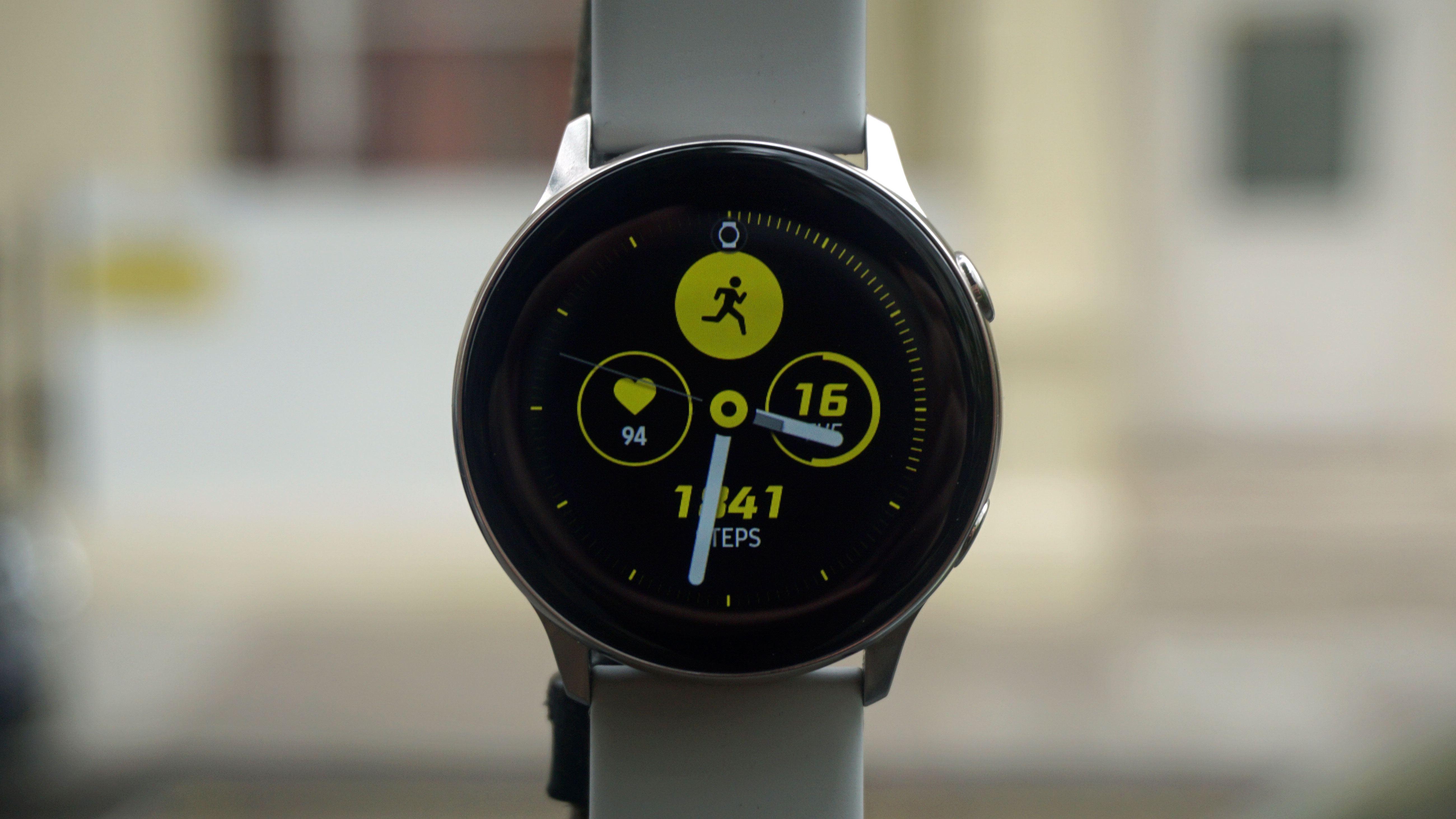 Bixby is nowhere near as useful as Google Assistant or Siri are on competing smartwatches, so we’d like to see the company step-up its voice assistant game in the coming months.

It’d be nice to hear about some new exclusive features for the Galaxy Watch line too.

It debuted on the Apple Watch 4, and while it’s not a feature you’ll use every day it feels like it’s nearly a must-have on a top-end smartwatch.

Alternatives like the Amazfit Verge 2 and Withings Move ECG will soon offer the feature too, so we’d love to see Samsung embrace the idea of an electrocardiogram on your wrist with its next smartwatch.

The original Samsung Galaxy Watch Active came in four colors; black, silver, rose gold and Sea Green. That last one is a shade that’s nearing dark blue when you see it in person, and we’d like to see Samsung get a bit more experimental with its color options for the next watch.

Considering this is the cheaper alternative to the premium Samsung Galaxy Watch line, we’d love to see the company embrace that more and offer a variety of design choices with perhaps even bolder color options for people to choose from.