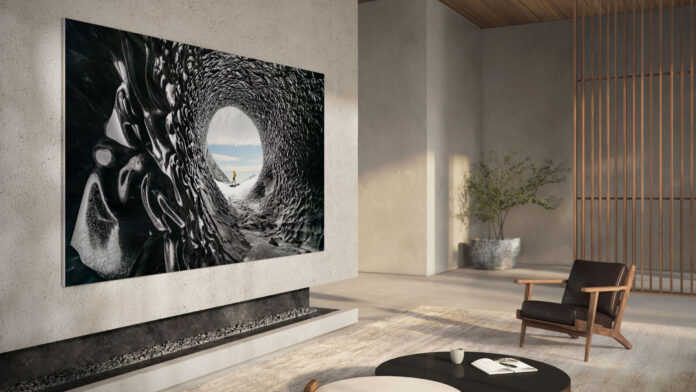 We’re well into 2022, and a brand new line-up of Samsung TVs is upon us. The South Korean brand has introduced new 4K and 8K QLEDs and its first OLED TV in close to a decade that uses Samsung Display’s QLED-OLED tech.According to new information, these TVs should be available starting at the end of March and early April, with a global rollout following shortly. New this year are updated versions of the award-winning Samsung QN900A and Samsung QN90A QLED TVs and a few roll-over models from last year like The Premiere projector, The Terrace outdoor TV and The Serif.

We’re hopeful about Samsung’s TV output for 2022, then, given that 2021 was a pretty stellar year for the brand. 2021 saw the launch of the stunningly impressive (albeit very expensive) Samsung Neo QN800 8K QLED TV, alongside new 4K beauties like the mini-LED-infused QN95A Neo QLED 4K TV.

Read on to find out more about Samsung’s 2022 line-up of TVs and the new tech that’ll hopefully set the brand apart from the competition – and, if you’re in the market for a new panel and don’t want to wait, we’ll cover the best Samsung TVs you can buy today.

Samsung’s new MicroLED TV is set to be its flagship panel for 2022, and how could it not be? Announced at CES 2022, the brand’s line-up of MicroLED TVs come in three sizes: 89-inch, 101-inch and an enormous 110-inch. Samsung has been understandably boisterous about its new tech, too, calling MicroLED “the pinnacle of display technology”.

So, what is MicroLED? The name can be taken quite literally, as Samsung’s MicroLED TVs will be packed with 25 million micrometer-sized LEDs, all of which individually produce color and light. Paired with support for 20-bit greyscale depth, and this is a TV that has potential to go above and beyond the HDR standards of today.

As for features, we know that Samsung’s Micro-LED TV sports a 4K picture and 120Hz refresh rate, is equipped with four HDMI ports and supports Dolby Atmos immersive sound. A pretty standard feature set for a high-end 4K TV, then – and yes, you can expect Samsung’s Micro-LED TV to launch with a steep price tag. For those of you on a stricter budget, Samsung will also have much more affordable TVs in its 2022 repertoire.

Samsung is carrying on its Neo QLED efforts in 2022. Understandable, considering the brand’s 2021 line-up of Neo QLED TVs were some of the best released that year, including the aforementioned Samsung QN95A Neo QLED 4K TV.

We still don’t have prices, unfortunately, but we do know that all six Neo QLED models will launch on April 8 in Europe. No US release dates have been confirmed as of yet, but it’s likely we’ll know more on that front as we approach the pre-order live date on March 16.

In terms of specs, Samsung is making improvements to its bespoke Neo Quantum Processor, with advanced contrast mapping via the BLU (back-light unit). This essentially means that you’ll have greater control over the TV’s brightness levels, allowing you to fine tune your TV’s brightness and get your picture looking just right.

Samsung isn’t stopping there with its 2022 Neo QLEDs, however. New Shape Adaptive Light technology controls the “shape” of the light coming from individual Quantum Mini LEDs, essentially enhancing the accuracy of objects on the screen, allowing for a more realistic picture than ever before.

Another interesting advancement is Samsung’s Real Depth Enhancer, a technology that attempts to analyze the distance between objects on screen and create a sense of depth for a realistic picture. Throw in an EyeComfort mode – which automatically adjusts screen brightness in a similar way to blue light filters found on monitors and phones – and Samsung’s 2022 Neo QLEDs seem to be packed to the gills with new features.

It’s not just visuals that are seeing an upgrade with the new QLEDs, though, as sound is potentially getting a major buff, too. Samsung’s Object Tracking Sound is being improved with OTS Pro, which should produce a powerful surround sound when paired with the TVs’ up-firing speakers.

Samsung QN700B 8K Neo QLED TV (55, 65, 75 inch): The smallest available 8K QLED TV from Samsung comes in the form of the 55-inch QN700B. It’s going to be the most affordable way to get an 8K TV from Samsung – but some would argue that the benefits of 8K at that size might not be enough to justify the price differential.

Samsung has confirmed three new Lifestyle TVs coming in 2022. These more bespoke displays certainly aren’t for everyone, but if you like the idea of your TV being displayed like a picture in a gallery, they might be well worth looking into. If you can stomach the likely high price tags, that is.

The Frame: 2022’s The Frame is aimed at customers who want their TV to double up as a focal point in their home. This new version features an anti-glare, matte display panel that emulates viewing a picture in a gallery environment when you’re not watching TV.The Frame also comes in a wide range of sizes, from 32 inches to 85 inches.

The Serif: This 2022 Samsung Lifestyle TV features a matte frame to accompany its matte display – the same that’s featured on The Frame. Details are slim for The Serif right now, but we do know that Samsung is adding a new 65-inch variant to its line-up.

The Sero: While we weren’t impressed with the original The Sero Lifestyle TV and felt  it was a tad gimmicky, 2022’s new Multi View mode could finally help this vertical-capable TV stand out from its counterparts. This mode will allow users to engage in multiple tasks at once, such as watching the next big Netflix show while looking up news online.

The new Smart Hub sidebar allows for quick and easy transitioning between different viewing modes for media, gaming and ambient entertainment. A new Watch Together app will also let friends and family video chat and watch content from the source TV, no matter where they are.

Plus, an enhanced Smart Calibration feature offers two modes of picture optimization. The Basic mode readies your TV for general viewing in roughly 30 seconds. However, the more interesting Professional mode fully optimizes the screen, and should ensure you’re viewing or gaming with the best  picture quality possible. The process does take around 10 minutes, however, so here’s hoping the extended wait is worth the results.

Rounding out the currently announced Smart Hub additions is a new NFT Platform allowing for the discovery, purchase and selling of digital goods. It remains to be seen how well this feature will be received – or even how committed Samsung will be to it – considering the extremely divisive nature of NFTs in general.

Perhaps one of the more interesting features coming to Samsung TVs in 2022 is the new Gaming Hub, which could see them compete with some of the very best TVs for gaming on the market right now, including the LG C1.

Gaming Hub combines a number of game streaming services into one platform, including Nvidia GeForce Now, Utomik, Google Stadia and hopefully Amazon Luna in the future. Think of this as like a streaming stick but for game streaming apps instead of media.

What’s the best Samsung TV you can buy today?

We don’t know when the first of Samsung’s 2022 TVs will be released, but we can expect to see various deals and discounts for many TVs in its 2021 line-up as we lurch further into the year.

There are many 2021 Samsung TVs that are still worth buying, many of which are featured in our best 4K TV and best 8K TV buying guides. However, if you’re in the market for one of the best Samsung TVs right now, none shine brighter than the Samsung QN95A Neo QLED 4K TV.

This stunning television is arguably the culmination of everything the Korean brand has achieved over the years with its displays, featuring mini-LED technology for a stunningly colorful and accurate picture quality. Its success is the likely reason Samsung is forging ahead with mini-LED tech, given the improvements coming that we’ve highlighted above.