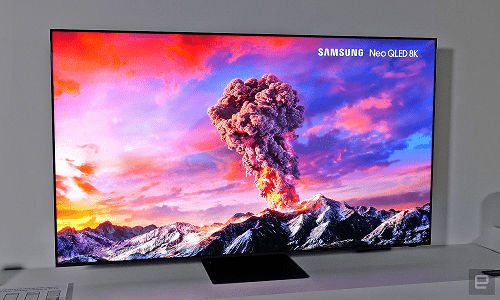 While Samsung announced all of its new 2022 TVs back at CES, due to the pandemic we haven’t been able to check them out in person until now. And even though Samsung didn’t bring all of its 30-plus new sets to its flagship store in New York, from what I saw there’s a lot to like about Samsung’s latest big-screen lineup.

The centerpiece of Samsung’s portfolio is, without a doubt, the new QN900B, the centerpiece of the company’s Neo QLED 8K family. For 2022, Samsung has added 14-bit HDR mapping (up from 12-bit mapping on last year’s models) to improve picture detail in both bright and dark scenes. When combined with that massive 7,680 x 4,320 resolution, the TV looks seriously sharp.

But the most promising upgrades might be the changes Samsung made behind the glass, including an updated Neural Quantum processor the company says can analyze the content being shown to further optimize image quality. As for audio, the QN900B also gets a new 90W 6.2.4 channel speaker setup featuring Dolby Atmos with Object Tracking Sound Pro. This allows the TV to tweak sounds and voices based on where they appear on screen, adding an extra level of immersion.

As a gamer, I really like that in addition to improved support for game streaming services like Google Stadia and NVIDIA GeForce Now built into Samsung’s Gaming Hub, the QN900B (along with the 4K QN95B and QN90B) also gets one HDMI 2.1 port that supports refresh rates of up to 144Hz (up from 120Hz). Meanwhile, all of Samsung’s new TVs from the Q80B and up will come standard with four HDMI 2.1 ports that support 120Hz inputs. That means you won’t need to constantly mess with your cables to make sure you’re getting the best possible image quality for your Xbox Series X, PS5, or any gaming PCs you might have connected to the TV. That’s a big quality of life upgrade compared to my two-year-old TV that only has a single port that supports 120Hz inputs.

I also want to mention the QN900B’s design, which features practically non-existent bezels. Particularly with its slimmer base, the TV really gives the impression that the whole thing is floating in mid-air. Samsung even tweaked the sides of the TV’s bezels with a brushed metal finish and patterned cut-outs, which looks slick but not distracting. Sadly, with the smallest 65-inch model starting at a whopping $5,000, Samsung’s latest 8K TVs aren’t cheap. Thankfully, if you don’t care about 8K (which is very understandable), Samsung’s Neo QLED 4K QN85B starts at just $1,500 for a 55-inch model.

However, I think the S95B (which starts at $2,200 for a 55-inch model) is Samsung’s most interesting TV for 2022. Not only is it the company’s first new OLED TV in almost a decade, it also features Quantum Dot technology and a new sub-pixel architecture that delivers some truly impressive colors. Unlike traditional OLED displays, Samsung got rid of the traditional white sub-pixel and instead uses blue sub-pixels as the main source of illumination. And when paired with the same Neural Quantum Processor used in the QN900B, the S95B delivers better brightness than traditional OLEDs without washing out colors or reducing saturation. Honestly, the richness and vibrancy of this display is jaw-dropping, and I actually stopped in my tracks the first time I walked past it.

Now, it’s important to remember that the S95B still isn’t as bright as one of Samsung’s QLED sets, so for people watching TV in a room with lots of windows or tons of ambient light, something like the 4K QN90B would probably be a better option. And while the S95B (which starts at $2,199.99 for a 55-inch model) does get four HDMI ports that support 120Hz inputs, sizes top out at just 65 inches compared to 85 inches for most of Samsung’s QLED sets.

Finally, when it comes to Samsung’s Frame TVs (which starts at $1,000 for a 43-inch model), the big change for 2022 is a new matte finish that reduces reflections and helps the set do an even better job of disguising itself as art when you’re not watching it. To me, the matte finish gave things like brush strokes in paintings an extra level of texture, resulting in a more lifelike appearance. That said, there is a downside because the anti-reflective coating slightly reduces how much light gets through the TV’s front glass. Thankfully, Samsung easily remedied that by increasing the 2022 Frame’s overall brightness, both in art mode and when showing content.

But perhaps my big takeaway after seeing Samsung’s new TV lineup is that it feels like there’s more choice than ever before when it comes to picking your perfect set. If you want a super high-res TV with excellent brightness that will look great even in bright rooms with lots of windows, there’s the QN900B. Alternatively, if you want brilliant colors and deep inky blacks, the S95B represents a welcome return for Samsung to the OLED TV space, which is a market its cross-country rival LG has dominated in recent years. And if you prefer a TV with a more subdued design that might blend in better with your decor, there’s the Frame and its updated matte finish.

All of Samsung’s new 2022 TVs are available for pre-order today, with devices expected to begin shipping out sometime later this month. 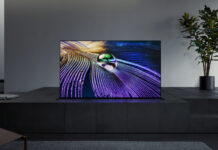 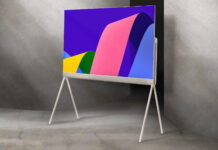 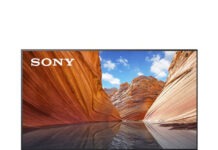