CyberiansTech
Home Tech Can I use a tablet as a replacement for my smartphone? 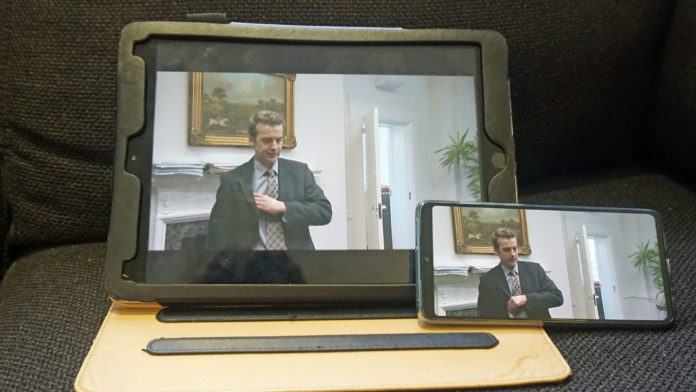 Can I use a tablet as a replacement for my smartphone?

There are two pieces of tech that are arguably vital for a connected existence in the modern world; smartphones are part of our daily routine, as a tool to communicate with the wider world (as well as serving as a portable entertainment device), while for many, a laptop or computer is crucial for work.

Tablets are meant to fit both these tasks – they’re portable like smartphones and share the same operating systems, but they’re large enough to comfortably run word processors and spreadsheets like a computer.

But can you actually use a tablet as a replacement for a smartphone? To find out I locked my smartphone away and spent a few days using my iPad (2017) as my only form of portable tech.

When I’m commuting, I always use my phone to stream music or podcasts on Spotify, but since my tablet had to go in my bag rather than my pocket, my headphone cable couldn’t reach it. So, I walked to work in silence, sans tunes, and sans casts.

I say silent, but my music would normally allow me to ignore the horrible sounds of London’s Euston Road, so I swapping my smartphone for a tablet made me more in-tune with my surroundings – which wasn’t a good thing.

Taking the London Underground was a whole different story, however – while previously I’d squinted at ebooks or Netflix shows on my phone, with a tablet I had a portable cinema on my lap, and I made sure to make the most of it.

I always loaded up the tablet with the best Netflix shows I could find (which were always longer than my commute, annoyingly), and since people often bring laptops onto the tube I felt no shame having my moderate-sized handheld.

Ditching my laptop in order to work on an iPad felt like a real trial by fire, as it’s a very different beast to a laptop.

Typing on the iPad’s on-screen keyboard took a while to get used to, as when I touch-typed on it like I would a laptop keyboard, I’d often lose letters in words or accidentally swipe down on keys, selecting symbols instead of letters.

You definitely can’t use tablet keyboards in the same way as physical ones, although my tablet typing pace definitely got closer to my usual keyboard-enabled speed after a while.

The iPad was a blessing when it came to working in different places though – it’s always a chore having to assemble and boot up a chunky laptop when working on the go, but with the iPad I could whip it out and have it running in a matter of seconds.

I also really enjoyed the lack of distraction brought about my ditching the smartphone – the absence of a gadget to fiddle with and browse on meant I was more focused on work and less likely to lose large chunks of time to doing nothing.

The biggest issue with using a tablet as a phone, is that a tablet isn’t exactly a portable texting and calling device  and while that’s certainly true, who really needs to text and call nowadays?

All my communication is done through WhatsApp, emails, Slack, video calls and actual human face-to-face interaction, and I’d estimate that I only make or receive one phone call a week.

That’s not a lot, and after my tablet-exclusive time I didn’t have a single missed call or text, which shows how unimportant these phone features have become to me (of course I had WhatsApp calls and messages, but I rarely if ever dip into my phone contract).

Using a tablet did reduce my communication in one major way, as the inability to whip out my phone and scroll through apps meant I spent a lot less time on social media – but I’d say that’s actually a good thing, and I spent more time on non-phone activities and real-life conversations.

I’m a big mobile gamer, and have been known to disappear into a quick game from time to time of something light like a puzzle game or sometimes heavier fare, like PUBG Mobile.

Having an iPad didn’t change that, but it was like playing a HD remaster of a childhood classic – the bigger screen made games play quicker, look better, and feel more immersive.

For the few days my tablet was my only piece of portable tech, I probably played more games than I usually would on my phone, because the experience was more like playing on a console with a big TV screen.

The iPad was superior for all kinds of media too – as I’ve already said it was like having a portable theatre for watching content at all times of day, so much so that sometimes I’d stay in bed to watch Netflix instead of making my way to the living room TV (I have a very active lifestyle, I know).

Similarly audio quality was great – I love using my smartphone as a speaker when I’m cooking, cleaning or showering, and the audio quality on my iPad was better that on most phones I’ve used.

What did I miss?

I quickly got used to not having a phone, but there were a few things I did miss about my smartphone.

I’ve recently got into smartphone photography, but the iPad (2017)’s 8MP camera and its massive footprint didn’t exactly lend itself to taking photos.

Flicking through social media, games and work apps while in bed wasn’t very easy with a tablet that weighed double that of a phone, and I dropped it on my head multiple times while trying to have a leisurely browse.

Some apps that work great on phones aren’t optimized for tablets either, and they looked pretty horrible with tiny windows on a massive screen.

Overall though, I quickly forgot what it was like to use such a small and dainty device like a smartphone as my regular handset, as my tablet all but consumed my life, and its lack of portability meant I spent way less time looking at screens and way more time staring into the distance instead.

I’d really recommend putting down your phone once in a while to see if a tablet is good for you – of course that’s a big ask, what with the price of tablets, but if you’re looking for an upgrade from your old phone, maybe a tablet is the way to go.

The iPhone 11 Pro is Apple’s best video phone, but it’s far behind the...

Best Turntables 2019: The Best Record Players for any Budget

No Man’s Sky Beyond Update 2019: Everything You Need to Know