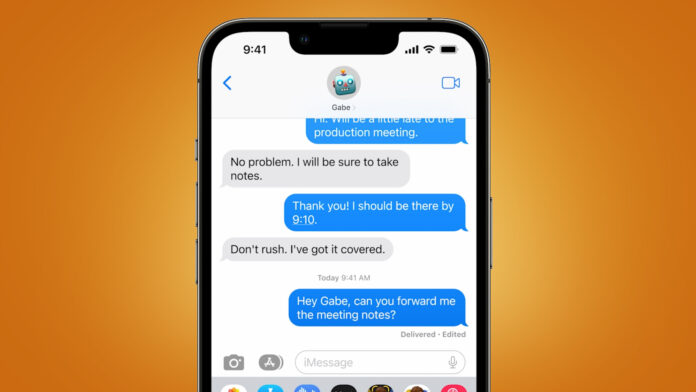 The WWDC 2022 keynote is over and it’s delivered some big, exciting software changes to our Apple gadgets, plus some new hardware in the form of the MacBook Air (M2, 2022).

But hidden among the headliners were some support acts that you may have missed in the noise. Now the dust’s settled on a WWDC 2022, it’s time to shine a light on those unsung announcements that could well be more important to you than Apple’s bigger announcements.

Here are our ten favorite things that went a little under the radar during Apple’s long presentation, but didn’t escape our trusty searchlight.

Recently experienced the head-in-hands regret of sending a text to the wrong person in your iPhone’s Messages app? Apple can’t help you now, but it will in the future thanks to some handy Messages updates in iOS 16.

When iOS 16 arrives later this year, you’ll be able to edit or unsend a message after you’ve tapped that fateful arrow icon. You’ll need to be fairly quick, as the option will only be available for up to 15 minutes after you’ve sent a message, but it could be a lifeline. After all, we pretty much use Gmail’s ‘undo send’ feature on a daily basis.

In a slightly controversial move, Apple’s new watchOS 9 software will only be supported by Apple Watch Series 4 models or later – which means it’s effectively killed the Apple Watch Series 3, a product that’s still currently on sale.

The Series 3 came out in 2017, so it’s certainly showing its age. But it is one of the Watches that supports Apple Fitness and, until now, represented an affordable way to get the Apple Watch experience. Not now, though – that honor now falls to the Apple Watch SE, as we’d highly recommend avoiding the Series 3 given its surprising lack of support for watchOS 9.

If you often stare with dismay at how bland your iPhone lock screen is, fear not –Apple is finally planning to let you jazz it up in iOS 16, which will be out in public beta from July. Apple’s “biggest update ever to the lock screen” will let you customize the clock’s font and add Apple Watch-style widgets.

These widgets will give you glanceable info like calendar events and the weather, and you’ll also be able to create several custom lock screens that you can swipe between. Android owners may roll their eyes as this ‘innovation’, but it’s a big new piece of personalization for the iPhone.

The built-in webcams on Apple’s Macs have often felt like afterthoughts, but Apple has just announced a workaround – you’ll soon be able to use your iPhone as a wireless Mac webcam instead. The new Continuity Camera feature in macOS Ventura, which is coming in late 2022, will automatically detect your iPhone and let you use it as a camera for any macOS video conferencing app without any cables.

That might sound like a slightly underwhelming stopgap, but Apple’s built some pretty cool features into Continuity Camera. Alongside the usual Portrait Mode and Center Stage, for blurring the background and keeping you in the middle of the frame, there’s Studio Light (think a virtual ring light) and a Desk View that somehow creates an overhead view of your desk from the iPhone’s ultra-wide camera.

5. Your Apple Watch will quietly judge how efficiently run

The Apple Watch has always lacked some of the more advanced fitness-tracking features found in some of its rivals, but the incoming watchOS 9 is going some way towards fixing that. Beyond some new watch faces and improved notifications, one of its most interesting updates are its new running form metrics.

Using some machine learning wizardry, watchOS 9 will be able to gather data on three running metrics – vertical oscillation, stride length and ground contact time – to help you improve your efficiency and inch towards some PBs. All of these will be served up in watchOS 9 (supported by the Apple Watch Series 4 and above) in some handy new Workout Views. We’ll reluctantly accept its advice if it powers us to fun run victory.

It looked like WWDC 2022 had left Apple TV owners completely empty-handed when it came to software gifts, but buried in the smallprint of some developer notes were some details about tvOS 16.

Unfortunately, the update looks like the Apple equivalent of a new pair of socks, with minor details about improvements to cross-device connectivity and boosted smart home support. Still, these may turn out to be more exciting than they look once developers get stuck into tvOS 16, with one improvement describing second-screen info on your iPhone or iPad as your watch your main TV. All very promising, as long as Apple is more committed to the Apple TV platform than it appears.

7. The Apple Home app has finally been rebuilt

Yes, Apple is supporting the new smart home standard Matter, which we saw talked up at Google IO 2022, but perhaps more important is that’s finally redesigned the underwhelming Home app in iOS 16.

This update, which apparently rebuilds the Home app from the ground up, looks like a much more modern (and usable) hub for your smart home tech. There are categories at the top for things like lights, security and climate, and below that is live info for all of them, including feeds from up to four security cameras. Now all we need is smart home tech that lives up to this glossy promise.

8. CarPlay wants to take over your entire dashboard

Apple’s CarPlay software is a fine way to level up your car’s infotainment experience, but its ambitions apparently don’t stop there – at WWDC 2022, Apple demoed a next-gen version of CarPlay that takes over the entire dashboard, including features like the speedometer, temperature controls and more.

Like an in-car version of your iPhone’s homescreen, you’ll be able to customize the look of different gauges and choose widgets to give you glanceable info for the weather or music. The downside? It won’t be here till later in 2023, and we suspect some car makers might be a bit resistant to its dashboard takeover ambitions.

9. iPhones will scan your ears for better Airpods sound

Apple’s iPhones can certainly take a mean photo, but their front cameras will also soon be used for a slightly more unusual purpose – scanning your ears. Why? So they can create Personalized Spatial Audio for a “more precise and immersive listening experience”, of course.

The scanning will be done by Apple’s TrueDepth camera, which means you’ll need an iPhone X or later to take advantage of the feature. And while Apple hasn’t yet stated which headphones will support the 3D effect, we reckon the AirPods Pro, AirPods 3 and AirPods Max are prime candidates given Apple’s familiarity with their inner workings. The only question is, how protective are you about your ear data?

10. The end of passwords is nigh

Some welcome news if your online security is still built on the dubious foundations of that one ‘unbreakable’ password you came up with in 2006 – Apple has joined Google and Microsoft in supporting the password-less authentication standard detailed by the FIDO alliance, giving a Safari demo of its ‘passkeys’ at WWDC 2022.

Rather than using passwords, the idea is that you’ll use your iPhone’s more modern identification features like Touch ID or Face ID to log into your favorite web services. According to Apple, Passkeys can’t be phished as they never leave your devices, or leaked as they’re not stored on a web server. Does the end of passwords also mean the end of password managers, though?