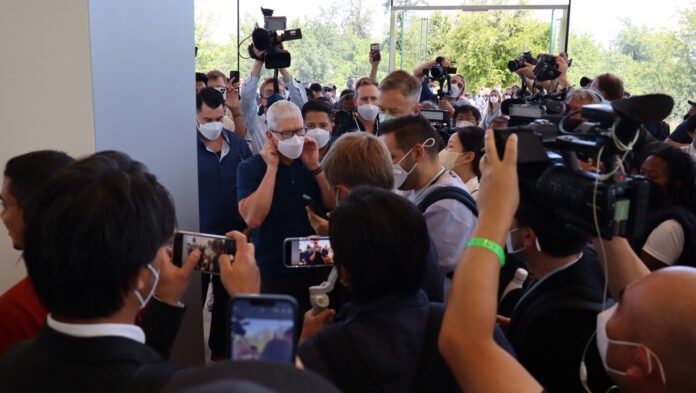 Where the heck is my Apple Glasses in 2022

Sitting under the warm California sun, slowly melting into my spare wooden folding chair as I listened to Apple’s WWDC 2022 keynote, I thought, “This’ll all be worth it when Tim Cook dons those sweet, sweet Apple Glasses.”

But he never did. The Apple CEO and his assorted executives who walked us through all the new iOS 16, iPadOS 16, watchOS 9, macOS Venture, sOS (oh, wait, I made that one up) updates didn’t unveil or tease Apple augmented or mixed reality glasses.

They didn’t introduce the rumored realityOS platform. The glasses and any code that might support them were a complete no-show. I don’t think there was a single significant mention of AR or VR.

Don’t get me wrong. I enjoyed the WWDC 2022 keynote. It was a true firehouse of information that we are all still picking through.

Many of the rumors, like new lock and notification screens in iOS 16 and the powerful M2 and new MacBook Air came true. Of course, they did, right? The rumors were so strong and pervasive that their arrival was all but foretold.

There’s also talk of more immersive headgear that, a la Meta Quest, would offer outside-in VR experiences that allow you to be aware of the outside world but mostly living in virtual reality bliss.

In the run-up to WWDC, the drumbeat of rumors regarding some kind of impending Apple AR/VR announcement grew louder.

Just this week, The New York Times ran an extensive piece full of “people with knowledge of the matter” that seemed to indicate we might get a whiff of Apple Glass at WWDC.

To be clear, the story never came out and said we’d see a headset or even a development platform to support it, but announcements were supposed to offer potential app support for the future headset.

I know that I came into the keynote believing that while we would not see a functioning or touchable headset, Cook would unveil the realityOS development platform to give coders a long runway to prepare for the hardware.

I expected an Apple Glass sizzle real with an in-person Tim Cook holding up the goggle-like frames at the end of his talk.

Leaving aside the rumors that led me down this garden path, I’ve paid close attention to Cook’s own words. During a 2018 earnings call, Cook said, “I see AR as being profound.”

I don’t think that’s changed and no one doubts Apple is hard at work on AR and VR hardware. So what happened?

Some industry watchers I spoke to believe the entire Apple Glass and/or realityOS section was pulled from the keynote at the last minute. People said similar things when the glasses didn’t show up at Apple’s spring event where it unveiled its new silicon and Mac Studio.

This notion, though, paints Apple as capricious and, even, uncertain. The Apple I know is methodical and curates every single experience, whether it’s a product you own or an event it’s running.

The WWDC 2022 keynote wasn’t even a live presentation. After briefly appearing on stage to welcome the baking crowd, Cook stepped off and a pre-recorded 90-minute-plus video took over. How do you make last-minute changes to a presentation like that?

Still, I can’t quite shake the disappointment I feel at the lack of that one more thing, that shiny moment that elevates an Apple event above all others.

Apple might still talk privately with developers about realityOS and Apple Glass (WWDC runs through the week), but the opportunity to excite consumers (or businesses) is gone for another year.

I don’t see Apple introducing a new platform mid-year, and definitely not outside a developer event. After all, Apple Glass can’t win without killer apps and content. The New York Times says Apple is talking to people like director Jon Favreau about bringing eye-popping content to Apple Glass, but none of that will work without the apps and interfaces to support it.

For that, you need developers and for developers you need WWDC. Guess we’ll have to wait until WWDC 2023.