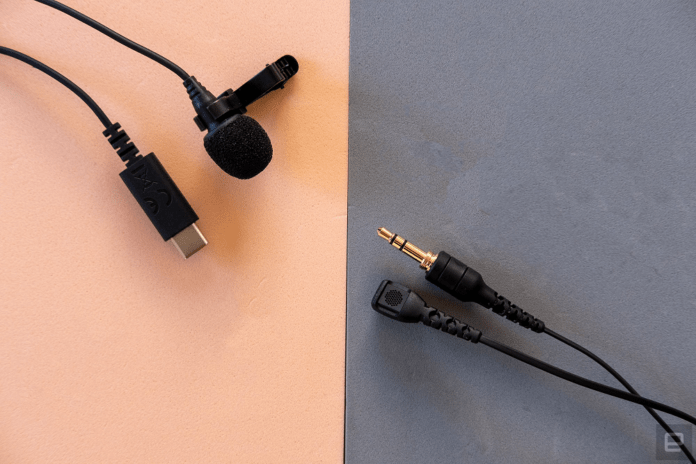 If you consider yourself a mobile creator and you’re not using some sort of dedicated microphone, you might be holding yourself back. We’re not judging, but your audience likely is. Audio, especially dialog, is often overlooked but nothing screams amateur more than subpar sound. There are many, many options for the home or office/studio, but there are a surprising amount of mobile-specific (or at least, mobile-friendly) solutions out there to elevate your on-the-go recordings be that for social, a jam session, making movies, podcasting and beyond.

What “the best mic for your iPhone or Android” is will vary depending on the task you need it for. If you want to record a TikTok or a Podcast or even a jam session, all have slightly different needs but the selection below covers most bases (and maybe even a few you didn’t think of yet) for recording high-quality sound with little more than a phone.

This guide is all about recording on the go, free from the constraints of a studio or office, but also far away from luxuries like power outlets, acoustically friendly rooms and a full-size PC. As such there are two styles of microphone that really shine here: Lavalier (lapel) and shotgun. We’ll be covering a few other types, too, but between those, most tasks are covered.

We’ll also show you how you can use the USB mics you may already have with your phone and even ways to connect heavy-duty studio classics (XLR) to your humble handset, but all that will be through accessories. For now, let’s start with the classic clip mics.

The obvious benefit of a lapel mic is size. Their small profile makes them perfect for presenting to the camera with the flexibility to move around while maintaining consistent audio quality. If you’re a budding TikTok or YouTube creator it’s definitely worth having one of these in your bag.

The main trade-off, however, is that they’re only good for recording the person they’re attached to. If you have two people talking and only one is wearing the mic, you’ll only get good audio for one half of the conversation, so for multi-person recordings you’ll need a mic for each guest and a way to record them at the same time, so costs can go up quickly.

Fortunately, lapel mics have become a very competitive market with good, viable options costing as little as $14.95. For an absolute bargain with a long cord and some connectivity accessories, the Boya BY M1 is hard to argue with. But, while these budget choices are great value, if you want something that should either last longer, is more versatile or just sounds better it’s worth paying a little bit more.

Rode’s Lavalier II is a slick-looking low-profile lavalier that sounds great. At $95, it’s somewhere in the sweet spot between budget and higher-end options. It’s easy to recommend the Lavalier II just on its sound alone, but it comes with a rugged case and a good selection of accessories. For even more flexibility you can pair this with Rode’s AI Micro interface ($79) which provides easy connection to an iPhone or Android (or even PCs) and adds support for a second mic – perfect for recording podcasts or interviews.

At $60 Sennheiser’s XS (USB-C) lav mic is fairly affordable, sounds great and plugs right into your phone (or laptop) without needing an adapter. This not only makes it convenient but reduces the overall cost as you don’t need a headphone adapter for your phone. What’s more, the XS has a 2-meter long cable which gives you plenty of scope for movement or framing.

A word on wireless systems

Recently there has been an explosion in mobile-friendly wireless systems but there are two we really like. The first is Rode’s Wireless GO II. Arguably the original defined this category, but the second generation improves on it with two wireless transmitters making this podcast and interview friendly. The Wireless GO II is also incredibly versatile as it doubles as a standalone recorder, can be mounted in a camera cold shoe and even has its own “reporter” mic adapter. Oh, and you can make any 3.5mm mic (including the lavaliers above) wireless by plugging it into one of the receivers.

The second is the Mikme Pocket. This Austrian-designed wireless pack is a high-end lavalier mic system designed to be particularly mobile-friendly. There’s a comprehensive app for both video and audio recording and internal storage so you won’t ever experience dropouts. It also means you can enjoy a practically infinite range. At $399 it’s a higher spend, but if high-quality audio and near-infinite range are what you need then this is the one.

So we’ve already touched on this with the AI Micro, which is an adapter of sorts. One of the first things you might bump up against when dealing with mobile audio accessories is TRRS vs TRS connectors. Simply put, 3.5mm TRS is what you might know as the age-old classic headphone connector while TRRS became common for its support for headsets and inline mics. You can easily tell them apart as TRS connectors have two black bands on them while a TRRS has three.

For you, the budding creator, it can be a bit of an annoyance as many 3.5mm lavaliers are going to be TRS and won’t work when plugged into your phone’s headphone adapter. Sometimes your lavalier might include what you need in the box, but otherwise, you’ll want to pick up a TRS to TRRS adapter like this. Of course, some smartphone-specific mics have TRRS connectors already – for those, you’ll want a cable that goes the other way should you want to use it with other devices like a DSLR.

You may be more familiar with shotgun mics when it comes to video. It’s the style of microphone most often found atop a DSLR or mirrorless camera, but they make great companions for other portable devices too, your phone included.

The benefit of a shotgun is that they tend to be highly directional, which makes them perfect for podcasts, recording instruments, foley sounds and much, much more.

For us mobile recordists, another benefit is that they tend to be light and portable, perfect for slipping into a backpack or even a laptop bag. Even better, there are some great mobile-specific options.

You shouldn’t buy a mic just because of how it looks, but the MKE 400 from Sennheiser ($200) definitely makes its rivals look wimpy. More important than aesthetics, though, is how it sounds and the MKE 400 records very cleanly without obvious coloration to the audio. What’s more, the battery-powered mic won’t steal power from your phone or camera, and with three gain levels to choose from you can boost things when needed, or avoid clipping on louder subjects. The MKE 400 also comes with both TRS and TRRS cables for compatibility with a variety of devices.

The MKE 400’s physical gain controls and high pass filter (unlike the other two below that are updated via an app) take the stress out of worrying if your audio source moves or changes volume as you can adjust that on the fly. If you’re a musician looking to record loud drums and then softer vocals on the move, for example, these tactile gain settings are a massive plus.

When we tested the VideoMic GO II we were surprised at just how good it sounded right out of the box. At $150 it rivals many desktop microphones that cost three times the price. You’ll need a companion app to change settings, otherwise this performs well across the board.

Not to be confused with the older MV88 that plugged directly into a Lightning port, the MV88+ is a diminutive shotgun mic made with the smartphone in mind. Often sold as a vlogging kit ($249) with a tripod and phone grip, the MV88+ has modular cables for connecting directly to Androids and iPhones.

Mobile-specific mics are great, but there’s nothing stopping you from using the mic you might already have (if it’s somewhat portable). You’ll definitely need to do a little dance with some adapters, but that’s half the fun. Below are a couple of recommendations for “regular” microphones that pair well with a phone and then the cables and adapters that you’ll need to get setup.

Arguably, there are few microphones that are could be described as “mobile-friendly” than the HypeMic from Apogee. While it looks like a regular handheld mic, it’s actually deceivingly small, making it very light and portable. It also comes with cables to directly connect it to iPhones and Android handsets — no adapters needed. Don’t let the small size deceive you though, the HypeMic has a big trick up its sleeve: a built-in analog compressor for professional-sounding vocals. Whether you record podcasts, vocals or instruments there’s a setting on the HypeMic just for you. At $349 it’s a little on the spendy side, but you get a very versatile device that’s just as useful for the desktop too.

This dynamic mic is a favorite with podcasters, with many production companies using it as their standard mic to send out to remote guests thanks to its excellent quality to value performance. The Q2U features both USB and XLR connectivity making it versatile for both desktop and mobile applications, but it’s the former we’re interested in here as that’s what allows you to connect it to your phone with nothing more than a USB cable and an adapter (see below).

What’s more, the Q2U is solid enough to endure a little bit of rough and tumble, so will happily live in the bottom of your backpack ready for when you need it. Meanwhile, the handheld design is versatile enough it can turn its hand to singing/instruments, podcasts, interviews and more.

You may not be familiar with the name, but Tula snuck into our hearts with its versatile, vintage inspired debut microphone. From a mobile perspective, the Tula connects to Androids directly over USB-C or iPhones with the right USB-C to Lightning cable (more on this below) or a USB “camera kit” adapter. What makes the Tula special is that it’s also a desktop mic and portable recorder with lavalier input and 8GB of storage and even features noise cancellation – perfect for cutting down on outside background sounds. With the Tula you could theoretically have one mic for home, mobile and standalone recording.

If you already have a stash of XLR mics or really do need a studio condenser mic with phantom power then the iRig Pre 2 is a portable interface that will feed any XLR mic into your phone. It runs off two AA batteries which it uses to supply phantom power when needed and won’t drain your phone. There’s also a headphone port for monitoring, gain controls and LEDs to help prevent clipping.

A word on cables

Connecting USB microphones directly to phones is rarely as simple as just one cable, although that’s starting to become more common. In general, Android makes this simpler, but also, thanks to the wide range of manufacturers and software versions you can’t always guarantee things will work smoothly.

The iPhone is a whole other situation. USB microphones have a good chance of working via the USB camera kit we mentioned earlier, but that’s still inelegant sometimes. Frustratingly, some USB-C to Lightning cables will play nice with microphones, but sadly most will not – including Apple’s own. One confirmed option is this cable from Fiio or this generic alternative. These are inexpensive enough that it’s worth having a couple around if you work with audio a lot (they of course can also be used to charge your phone as a bonus).