Xiaomi is gearing up to introduce the Redmi Note 8 series on August 29 at an event in China. The new lineup will follow the company’s Redmi Note 7 series which was launched early this year on February 28 in India. Redmi followed it with the Note 7S which was announced on May 20. And now, Xiaomi is all set to unveil the next generation of its much popular Note series.

Xiaomi has also managed to ship over 20 million units of the Redmi Note 7 series globally which is a feat in itself. We found the Redmi Note 7 Pro to be Xiaomi’s most refreshing upgrade to the lineup in a long time, as we noted in our review. The Note 7 series set a benchmark in the smartphone markets around the world and it’s up to Xiaomi now to one up themselves.

The mobile phone turf has seen a lot of developments in the past quarter or so with consumers eyeing features like pop-up camera, in-display fingerprint sensor and multiple cameras under various budget segments.

Having said that, Redmi Note series is a pretty important lineup for the Chinese electronics maker which is why it is doubling down on making the phones feature rich. 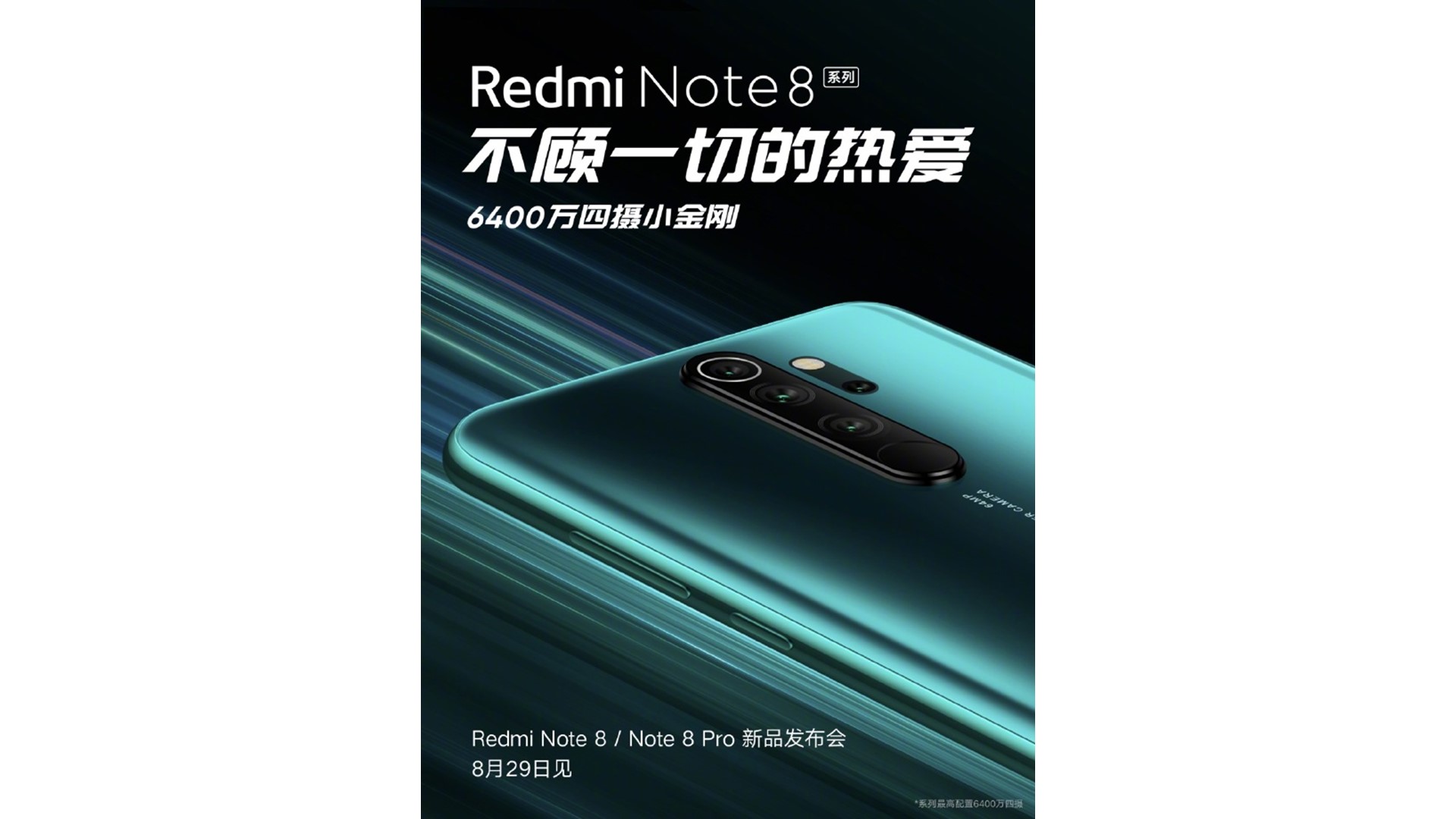 Xiaomi had recently revealed that it was developing a phone with Samsung’s Bright GW1 64MP camera sensor and that it would be launched soon.

Now its confirmed that the phone in question is none other than the Redmi Note 8 series which will have a 64MP quad camera setup on the rear.

Xiaomi has confirmed via Chinese social networking site Weibo that it is going to unveil the next generation of Redmi Note series on August 29. Previously, Xiaomi CEO Lei Jun had hinted that the two phones in the series will be making an appearance during the August 29 event where the company will also take wraps off of its much awaited Redmi TV.

The event will be held in China and we can expect Xiaomi to announce atleast three new products– Redmi Note 8, Redmi Note 8 Pro and Redmi TV.

Xiaomi’s Redmi Note series has almost always offered a great value for money smartphone with more premium features and design upgrades as seen on the Redmi Note 7 series. Considering that the Redmi Note 7 and its Pro version were priced starting at Rs 9,999 ($140) and Rs 13,999 ($195) respectively, we expect the Redmi Note 8 series to maintain the price of base variant for its regular Note 8.

While Xiaomi hasn’t spilled many beans on the upcoming Redmi Note 8 series, we know that the Pro version in the lineup will definitely have a 64MP camera in addition to three more sensors. So, its a 64MP quad camera setup we are looking at for the Redmi Note 8 Pro.

However, we’re note too sure if the same Samsung G1 64MP sensor will also find a home on the regular Note 8.

From the invite that appeared on Weibo, we can see three cameras along with a fingerprint sensor housed in a single vertical module. A camera sensor and flash are positioned just adjacent to the main camera module.

Some rumours have also indicated that the Redmi Note 8 will support 18W fast charging, but apart from that, there isn’t a piece of solid information available on the specifications of the Redmi Note 8 series just yet.

Having said that, we expect the rumour mill to deliver some key details on the upcoming phones as we near the launch date.