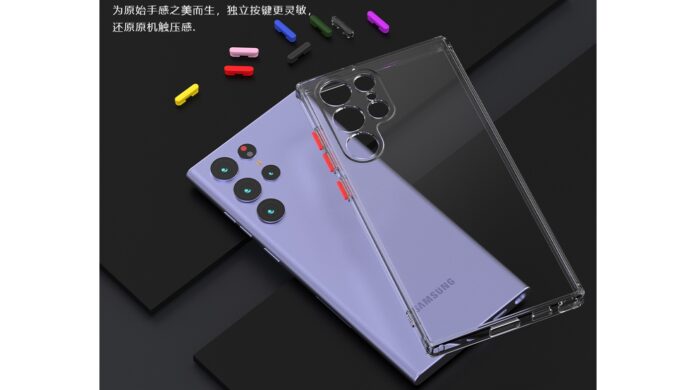 The design of the Samsung Galaxy S22 Ultra has been extensively leaked now, with even case makers getting in on the act, and the latest selection of images do a good job of showing off the likely look.

Shared by @UniverseIce (a leaker with a solid track record) the images below show the Samsung Galaxy S22 Ultra in (and out of) a transparent case. The phone is shown in a purple shade – so that might be one of the colors that the Galaxy S22 Ultra will be sold in.

Beyond the color, you’ll note the curved edges, the Samsung logo, and on the bottom edge you can make out an S Pen slot, while on the left side there are volume and power buttons.

The camera though is arguably the most notable design feature. It includes four lenses, a flash and a laser autofocus sensor, with everything except the flash jutting out of the back of the phone.

The design here exactly lines up with what we’ve seen before, and while some early leaks suggested the Galaxy S22 Ultra’s camera might be housed in a block rather than the individual lenses sticking out, it looks increasingly like the design shown above is actually what we’ll get, with every recent leak showing this.

We would of course take this with a pinch of salt though, as it’s not clear where these images were sourced, and even if they’ve come straight from a case maker it’s still possible that they’re based on leaks rather than inside information.

Opinion: a change, but not for the better

The new camera design shown on these unofficial Samsung Galaxy S22 Ultra images is quite a change from the setup Samsung used on the Galaxy S21 Ultra. That has a rectangular metal camera block housing the lenses, and the color of this provides a contrast with the rest of the back.

Here, not only do you not get the contrast, but the lenses arguably look a bit more awkward, and potentially more vulnerable to damage.

It also seems slightly odd that the rest of the Samsung Galaxy S22 range – from what we’ve seen so far – appears to stick with the old camera design.

Changing the design could make sense, given that Samsung has used similar camera blocks for a couple of years now, but we’re just not sold on the specific way it’s seemingly been changed here – or the fact that only model appears to have a new camera design.