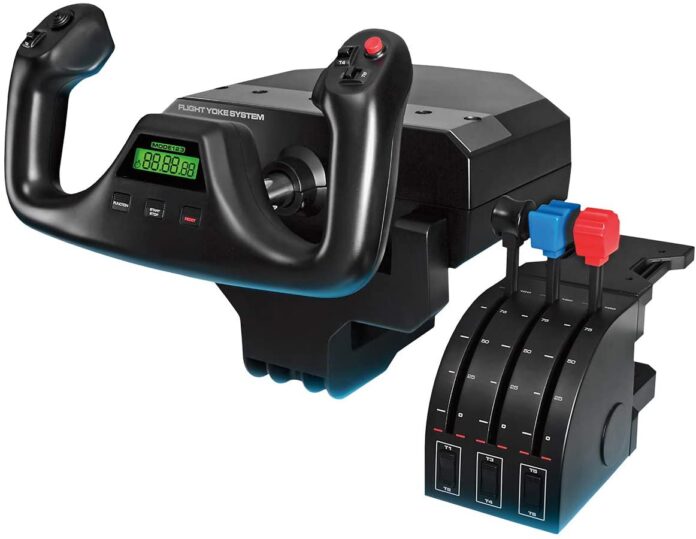 The latest entry in the Microsoft Flight Simulator series has been out on PC for a while now, but it’s also recently launched on Xbox Series X/S, giving console players a chance to see what all the fuss is about. Not to mention it’s also available for Xbox Game Pass subscribers to download and try out at no extra cost. We’ve already run through what to do first in Microsoft Flight Simulator, but what gear should you do it with?

Microsoft Flight Simulator uses the tech giant’s Azure AI to faithfully render the entire planet, and while textures certainly look a little crusty if you’re very low to the ground, the view from high above is simply breathtaking to behold, especially as the game also simulates real-world weather conditions and day/night cycles in real-time.

But you’ve noticed the word ‘Simulator’ in the game’s title, meaning that whether or not you’re familiar with it, you’re likely aware that a controller or mouse and keyboard setup might not give you the most accurate or hands-on control schemes available. This is especially true as Microsoft Flight Simulator supports peripherals such as flight sticks.

As such, we’ve put together a buying guide of the best peripherals and accessories you can buy to help you immerse yourself in Microsoft Flight Simulator as much as possible. Whether you’re on the long haul from Charles de Gaulle to Salt Lake City, or just having a cheeky gander at Angkor Wat, the following peripherals will help you get there in style.

An affordable, accessible option for starting out

If you’re just getting into peripherals, the Logitech G Saitek Pro is a great place to start. For such a robust joystick with loads of options, it’s relatively affordable, and the vast majority of its controls can be fully customized to your liking.

While its affordability does result in a somewhat cheap build, we can’t help but love the Saitek Pro’s design, which is a fairly accurate rendition of a pilot’s flight stick and throttle controls.

The yoke joystick feels great to use, providing smooth elevation that feels much more accurate than what an analog stick could offer in this type of game. The included throttle controls only add to the immersion, too, and they work fully with Microsoft Flight Simulator’s in-game planes.

An Xbox-compatible flight stick at an affordable price

Great build quality
Detachable base
Affordable
Not the most robust option

If you’re after a no-nonsense, but still quite a robust joystick for Microsoft Flight Simulator, then the Thrustmaster T-Flight Hotas One is a fantastic option, especially as it’s compatible with both Xbox Series X/S consoles as well as PC.

The Hotas One is comprised of the main joystick, a throttle, and a detachable base, allowing you to position the peripheral to your liking. Plus, the fact that this is an official flight stick means there should be little to no compatibility issues if you’re playing on console.

Looking for an all-in-one Microsoft Flight Simulator package? This FCS Flight Pack from Thrustmaster might be the right option for you. It’s an expensive pack, but for your money you’re getting the Thrustmaster T.16000M FCS flight stick, alongside pedals and throttle for a fully-featured flying experience.

The throttle and pedals’ SMART slide rail system means that controls are incredibly smooth, making it easier to perform tricky maneuvers while you’re in the air.

On top of that, you’ve also got Thrustmaster’s TARGET software which lets you completely customize your setup’s controls to your liking, allowing for an experience as robust as it is smooth.

If you’ve got money to spare, then Honeycomb’s range of flight sim peripherals might be for you. These high-quality accessories command eye-watering prices, but they’re billed as the best flight sim controllers on PC, and it’s easy to see why with that exhaustive feature set.

The Alpha Flight Controls feature a 180-degree yoke as the centerpiece, with no dead zone allowing for extremely smooth control. The panel is also rife with extra buttons, such as an 8-way hat switch, horizontal and vertical rocker switches alongside other buttons, including one for push-to-talk functions.

Throw in customizable, adjustable backlighting on the cockpit and you’ve got a seriously luxurious flight stick on your hands. It looks and feels amazing, just be aware you might need to break the bank in order to get your hands on one.

Originally made in partnership with Ace Combat 7: Skies Unknown, this special edition Thrustmaster Hotas flight stick will still serve you well in Microsoft Flight Simulator, thanks to its range of great feedback features.

Comprised of a flight stick and throttle, this Thrustmaster Hotas peripheral features a slick, all-black design and an ergonomic build. The stick’s haptic functionality will also provide real-time physical feedback to your in-game actions, making for a stick that could bump the immersion up if you’re on a particularly long and turbulent flight.