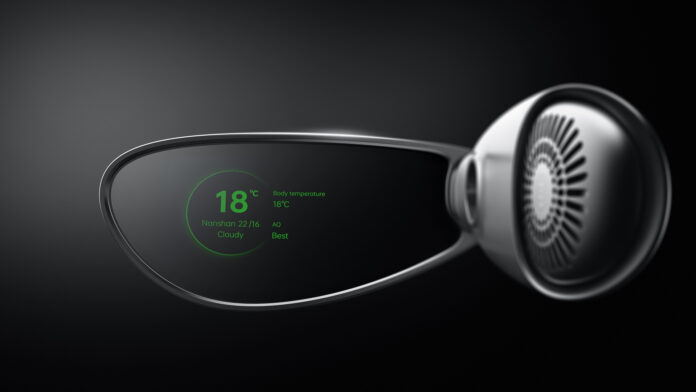 At Oppo’s annual Inno Day, where it shows off its new tech advancements (or ‘Inno’ vations), we’ve seen two key announcements – one regards mobile photography, which you can read about here, and the other is about the new Oppo Air Glass.

The Oppo Air Glass is the next version of the company’s head-mounted smart glasses – the company calls them ‘assisted reality’ specs, so they help you with everyday tasks, and examples touted include directions when you’re cycling and automatic language translation.

We don’t imagine Oppo Air Glass models will adorn the head of half the population come summer, as while they’re an interesting product we can’t quite work out why someone would buy them (and they don’t seem to be going on sale globally anyway).

However, these aren’t the only smart specs we’ve been hearing about, and rumors have been floating around about Apple Glasses that could popularize the form factor.

In particular, the Oppo Air Glass has two really useful features that Apple will need to adopt if its own wearables will succeed.

Fits on top of other lenses

Humans are very diverse, including in face shape, and a pair of frames that fits one head might sit horribly on another – that’s why opticians often have to tweak frames on glasses you buy.

Tech companies generally go for a ‘one-size-fits-all’ approach though, especially with glasses – they can’t produce a million slightly-different versions for all the unique human faces, after all.

Often, when you put a pair of smart glasses on your face, you’ll find they don’t sit right – at best they’ll feel a little ‘off’ and at worst they’ll be horribly uncomfortable to wear. Anyone who’s picked up a cheap pair of convenience-store sunglasses knows this feeling.

This won’t be a problem with the Oppo Air Glass, as they don’t come with frames – instead, they sit on top of pre-existing ones you own, and since they only weigh 30g they shouldn’t make your frames feel too lop-sided.

This means anyone, whether you have a skinny face or a wider head, will be able to use them without annoying discomfort. Plus, they can be removed and attached to other glasses, so if you’ve got one pair of specs for workouts, and other for reading, and separate ones for screens, it should be easy to use them all.

We’d hope with the Apple Glasses, the company will try and make them versatile so different types of users can use them, so Apple will need to take a leaf from Oppo’s book for this.

In the hands of developers

No matter how impressive a piece of hardware is, it’s only as good as it’s software or the programs that run it. A pair of Apple Glasses are useless if they’ve not got any worthwhile apps to use.

The same could be said about a pair of the Oppo Air Glass, except Oppo already has a solution. In a media briefing on the products, the company explained that it had already got an open STK (Sim Tool Kit) in the hands of developers.

As a result, the Oppo Air Glass won’t just have the built-in features, but will likely gain a wider variety of extra functions quickly after launch, making it a versatile wearable.

Apple hasn’t always had the best relationship with developers – just look at the well-publicized Epic Games court proceedings, and the related App Store fees debate, for proof. If Apple Glasses are going to be truly useful as smart glasses, the company needs to work with developers more to make sure they work.

There’s no official release information on the Oppo Air Glass, and we wouldn’t expect to see it available globally anyway. But it could serve as useful inspiration for Apple and its own smart glasses.