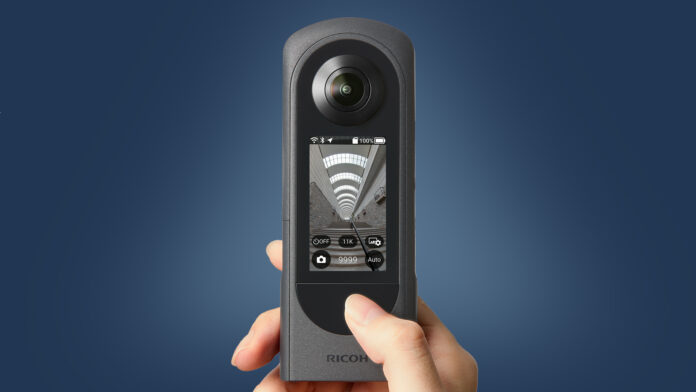 It’s been almost a decade since Ricoh introduced one of the first 360-degree cameras, and now it’s made a new Theta model that brings a few useful, if not entirely unique, features.The Theta X is a built around two 48MP sensors and twin lenses that can together capture 60MP spherical photos or 5.7K/30p video. But the usability upgrades from other Theta cameras, like the flagship Theta Z1, include a handy 2.25-inch touchscreen, interchangeable batteries and expandable memory.

While we’ve seen large touchscreens on 360 cameras before, like the Kandao QooCam 8K, this is the first time one has been included on a Ricoh Theta camera. It’s a big usability perk because it lets you preview scenes and view 360-degree photos on the camera, rather than relying on a companion app on your smartphone.

Other bonuses on the Theta X include a comparatively premium magnesium alloy body, the ability to power the camera from external batteries via its USB-C port while recording, and built-in GPS for geotagging your creations. Because the camera is built on Android OS, it’s also open to third-party plug-ins from creators, to expand its functionality.

This customizability has been one of the main appeals of Ricoh Theta cameras, as the plug-ins let you tailor the camera according your specific workflow. For example, you can add wireless livestreaming without the need for a PC, or get the camera to automatically blur faces that are in shot.

These kinds of features, and the Ricoh Theta X’s price tag, mean it’s aiming the camera more at commercial users than your average content creator or traveller, but it certainly looks like a versatile all-rounder. You’ll be able to buy it from March for $799 / £899 (around AU$1,700).

The question that usually arises when a new 360 camera launches is ‘who is it for’? While rivals from Insta360 are clearly aimed at content creators, it seems the Ricoh Theta X is looking for a home in businesses.

Ricoh says the pandemic has created a greater need for immersive images and virtual tours, so it’s made the Theta X for shooting 360-degree photos and video in areas like real estate, construction and the automotive industries.

This explains why the Theta X goes so big on flexibility, with the removable batteries and microSD slot helping it keep going all day in when it’s on work duty. Ricoh also says the camera’s real-time processing will help reduce editing times, which can be lengthy for 360-degree video footage.

When the original Theta first launched in 2013 it was mainly aimed at artists and creators, but 360 cameras back then struggled with limited editing techniques, and a lack of platforms on which to view your creations.

In the past few years, though, their appeal has been the ability to direct where the camera ‘looks’ in a traditional video using post-processing, long after you’ve got home. This is the strength of Insta360’s cameras, and while the Ricoh Theta X seems to instead be targeting the alternative need for businesses to create virtual tours in socially-distanced world, both are compelling use cases that could finally see 360-degree cameras find their niche in 2022.