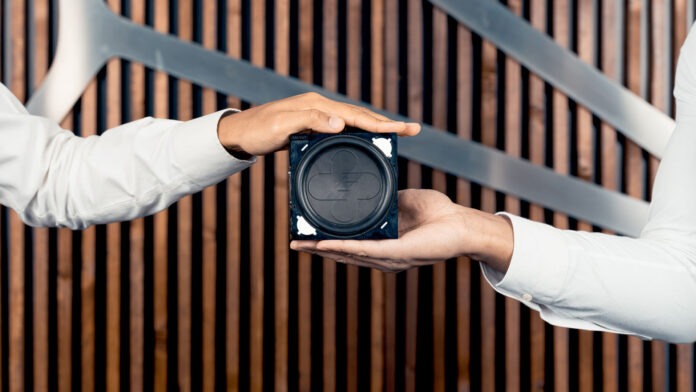 One of the worst things about using a Bluetooth speaker on the go is running out of battery halfway through your beach party, hike, or camping trip. However, a new prototype portable speaker created by tech companies Exeger and Mayht could make abrupt interruptions to your music a thing of the past.

The two companies are showcasing the Bluetooth speaker at CES 2022, and while it’s not available to the public just yet, it gives us an interesting insight into where the world of audio might be heading in the next few years.

Kitted out Exeger’s Powerfoyle material that can convert any light source into energy (as seen on the headband of the Urbanista Los Angeles headphones), the Bluetooth speaker is essentially self-charging, able to top up its reserves whether you’re indoors or out. As most portable speakers max out at around 12 hours of battery life, one that comes with a virtually infinite playtime would be game-changing.

There’s a lot of innovation going on inside the speaker, too. The prototype device contains a new kind of dual-membrane driver developed by Mayht, which it claims can match the power of a speaker ten times the size.

Mayht’s drivers are flatter and more compact than most on the market, but the company claims that they’re no less powerful or sonically adept, using what it calls HeartMotion technology to create an impressive audio performance.

Without being able to hear the prototype for ourselves, we can’t say for sure whether the speaker is really capable of these lofty claims – but the combination of a never-ending battery life and drivers that can deliver a bigger bass response than larger, more cumbersome speakers, is really compelling.

While Mayht created a number of prototype speakers to display at CES (including soundbars and subwoofers), the company’s CEO, Matthias Scheek, told us that he believes HeartMotion “will be in every audio device” and that he wants it to be seen as a standard to look out for, much like hi-res audio support or Dolby Atmos.

These new drivers could even make their way into earbuds and headphones, as long as Mayht can make them small enough. “We are doing some early stage research on how small can we actually go, and yeah, it’s definitely possible – especially for smartphones. I think it will be interesting, since smartphones normally sound really thin,” Scheek explains.

We may not have too long to wait to see HeartMotion in action. Mayht tells us it’s in conversation with no less than 45 companies to integrate HeartMotion technology into their products, spanning everything from car manufacturers to audio brands.

Whether the tech does become the new standard remains to be seen – but teaming up with a buzzy technology like Powerfoyle to create a device as accessible as a Bluetooth speaker is a smart move from Mayht, and one that could really shake up the world of audio.