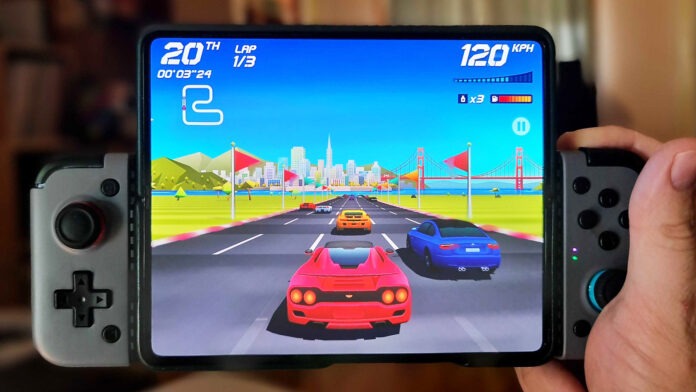 Cast your mind back to 2008 – the year that saw Apple’s groundbreaking iPhone 3G launch alongside its industry-changing App Store. Suddenly, users were able to access a storefront filled with thousands of games that could be instantly downloaded to their handset, essentially granting them a portable phone/gaming device that could be carried with them at all times (and not in a lame Nokia N-Gage way).

I, like many people, jumped into this new gaming landscape with absolute enthusiasm, and over the next few years, I would take the opportunity to pull my phone out and play a quick game of Doodle Jump, Real Racing, or Monument Valley whenever I had a free moment.

Of course, that enthusiasm would eventually dwindle, leading me to abandon mobile gaming entirely. This was due in large part to the limitations of on-screen controls on tiny mobile displays, along with the aggressive monetization that would make mobile gaming an insufferable grind for those unwilling to succumb to microtransactions.

So believe me when I say that I’m especially surprised to find myself returning to mobile gaming in a big way in 2021 – something that probably never would’ve happened if not for the release of Samsung’s Galaxy Z Fold 3.

Suddenly, I felt compelled to take advantage of the foldable device’s large inner display and beastly specs, seeking out the most visually impressive games to play on it – I’ve even purchased a third-party Bluetooth gaming controller dedicated exclusively to smartphones, so there’s no going back now.

So without further ado, here are the main reasons why Samsung’s Galaxy Z Fold 3 made me love mobile gaming again.

Its large 7.6-inch display is unbeatable

I might be in the minority here, but I find it more or less impossible to get excited about Nintendo’s incremental Switch OLED update when I already have access to the (admittedly expensive) Samsung Galaxy Z Fold 3 – a powerhouse device in its own right with a screen that absolutely wipes the floor with Nintendo’s meagre 720p offering.

Now, I may not be able to play Metroid Dread on the Z Fold 3, but I can play a large number of other games which boast sharper graphics and smoother frame rates. It’s not overstating things to say that Nintendo Switch OLED’s much-hyped display fails to hold a flickering birthday candle to the Z Fold 3’s screen.

Not only does its inner 7.6-inch OLED display provide a larger screen real estate than the Switch OLED, it also boasts a 1440p resolution and support for ultra-smooth 120Hz refresh rates. On top of this, it’s incredibly bright, offers blue light-limiting modes and other visibility enhancements, and allows you to tweak color vibrance and white balance to your liking.

It must also be said that the Z Fold 3’s more squared aspect ratio works tremendously well on a screen of this size – if the normal 20:9 aspect ratio of phones like the Galaxy S22 Ultra is meant to invoke the feeling of a mini widescreen television, the Galaxy Z Fold 3’s inner display is more like the IMAX-expanded equivalent (coincidentally, Zack Snyder’s Justice League fits almost perfectly on the Z Fold 3’s 11.2:9 screen).

its specs make it a gaming beast

From a performance standpoint, Samsung’s Galaxy Z Fold 3 is at the top of the Android smartphone pack. Its specs read like a list of the best components currently available, with Qualcomm’s best Snapdragon 888 chipset powering the device and a hefty 12GB of RAM accompanying it.

Every game that we’ve tested with customizable settings has played magnificently on Z Fold 3, with such titles as Call of Duty Mobile, Fortnite, PUBG, and the gorgeous loot-shooter Shadowgun Legends running at a smooth 60fps on Ultra / Max settings, and options like anti-aliasing and real-time shadows switched on. Certain games, like Call of Duty Mobile and the Diablo Immortal beta, offer downloadable texture packs, making their visuals even more impressive – so long as you have the storage space to spare.

It’s also worth noting that the device is 5G compatible, meaning players whose phone plans offer access to 5G speeds get faster, smoother online gameplay when outside of a Wi-Fi network.

There’s also no question that the device’s larger display provided this writer with a competitive advantage while playing the likes of Call of Duty Mobile. Enemies were larger and easier to spot on the battlefield, and on-screen controls felt more comfortable to use, given that they were now spaced further apart.

As mentioned earlier, I became so invested in FPS games on the Galaxy Z Fold 3, that I ended up buying myself a third-party Bluetooth gaming controller. After some research, I settled on the GameSir X2 Bluetooth Mobile Gaming Controller, as its flat-edged design and expandable backing allowed me to easily fit the larger Z Fold 3 into its clamps. Additionally, its Bluetooth functionality meant that I didn’t need the controller to line up exactly with the Z Fold 3’s USB Type-C port.

Talk about a gameplay upgrade! While on-screen controls worked well enough, I now had real triggers, buttons and sticks, affording me with Xbox-like gameplay responsiveness. Combined with the advantage given to me by the foldable’s large inner display, I became an unstoppable force in every ranked match I played from that point on.

Along with the ability to play graphically intensive games with ease, Samsung’s Galaxy Z Fold 3 also offers a suite of Game Booster tools that can be accessed by simply swiping up from the bottom edge of the display when a game is running.

Aside from allowing you to monitor your device’s temperature and memory usage, the Game Booster also allows you to turn on Priority Mode, which is intended to block out distractions, such as incoming calls and notifications. It’ll also close background apps that use your network connection to prevent your online gameplay from being hindered.

Additionally, you can connect to Discord via the Game Booster section, and you can also access controls which let you set touch protection, lock the navigation button, take screenshots, record video, download gameplay plugins and more.

While most handsets are happy to just give you one small speaker alongside their charging ports, the Galaxy Z Fold 3’s larger frame allows for two rather large speakers, providing you with surprisingly powerful audio on either side of your device (when played in landscape mode).

We all know that good sound is enough to give you a competitive advantage during online play, and the Samsung Galaxy Z Fold 3 absolutely delivers that, even managing to emulate spatial audio thanks to the device’s Dolby Atmos functionality.

Don’t get me wrong – the effect isn’t as convincing as having proper rear and upfiring speakers, but it absolutely does help you gauge which direction attacks are coming from in the heat of battle.

Although emulation can hardly be considered an official selling point of the device, given that emulators and ROMs are frowned upon by most game publishers and console manufacturers, let us (quietly) tell you that the Galaxy Z Fold 3 is an absolutely sublime device for this particular purpose – especially when playing older games in the 4:3 aspect ratio.

Also, the Z Fold 3’s ability to fold in the middle, along with its built-in stylus support, make it absolutely perfect for playing games for a certain dual-screen handheld gaming device from the past which shall remain nameless (you didn’t hear this from us, but the Android app DraStic even lets you import skins which can make your display look nearly identical to the device in question).

Paired with a Bluetooth controller, we found the Galaxy Z Fold 3 excelled in emulating games from the 16-bit and 64-bit era and even did well with other games from the console generation that followed right after. Many emulators allow you to tweak graphical settings, such as resolution and anti-aliasing, making certain titles look even better than they did originally.

That said, there’s room for improvement

So far, each title we’ve played on the Z Fold 3 has adjusted its aspect ratio to the device seamlessly, however, one issue we’ve come across is due to the act of switching between the outer and inner displays while a game is already running.

PUBG, for instance, would sometimes become stretched or squished in the transition between screens, but really, how often would anyone opt to play a game on the outer display anyway? We understand the appeal of ultra-wide gameplay, but ultra-tiny? Not so much.

It’s also worth noting that not every game looks better on a large display. The best-looking games are the ones that offer adjustable graphics settings, as they’re actually designed to take advantage of powerful handsets. Luckily, all of the biggest games available on mobile devices, such as Fortnite, PUBG, and Call of Duty Mobile, are among these titles.

Unfortunately, there are still many games that haven’t been optimized for large-screen devices. We booted up EA’s Need For Speed: No LImits only to find that it looked downright fugly on the Z Fold 3. We were also disappointed to find that the immensely popular Genshin Impact seemed to suffer from frame rate issues that were not present when played previously on the Samsung Galaxy Note 20 Ultra.

That said, we imagine that future patches will be able to iron these issues out. Minor inconveniences aside, Samsung’s Galaxy Z Fold 3 offers an unmatched mobile gaming experience which has made this writer excited about the future of the format.